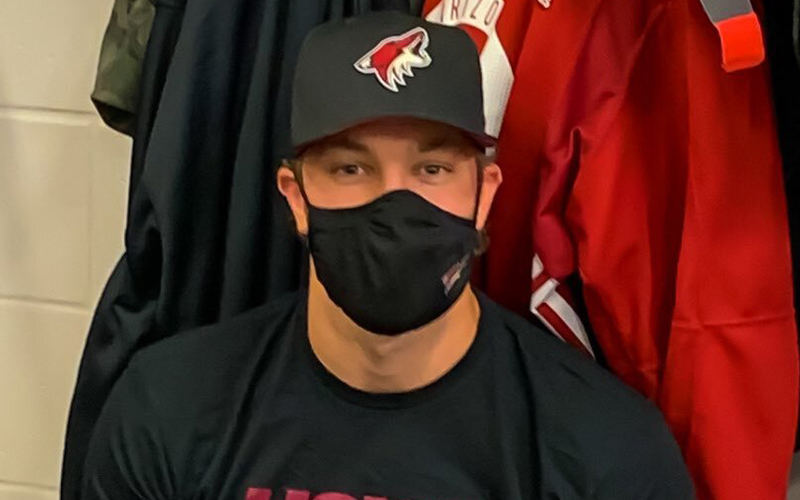 Life in the bubble looked a little different but Arizona Coyotes winger Taylor Hall and his teammates adjusted as needed. (Photo courtesy of Arizona Coyotes)

PHOENIX – A month ago, the Arizona Coyotes left their families behind to begin the long-awaited postseason journey at the NHL bubble in Edmonton, Canada.

The Coyotes, one of 24 teams to qualify for the National Hockey League’s Phase 4 Return to Play, were quarantined in preparation for the expanded postseason format.

As part of the NHL’s protocol, all personnel was required to pass through temperature check stations every 10 hours. Each player, coach, official and media member took COVID-19 tests regularly before events – an uneasy, but necessary process. As of Monday, the NHL had completed their fourth consecutive week with no positive tests for COVID-19 among the 4,644 tests administered, according to the league.

While the Coyotes maintained a steady focus on the ice at Rogers Place, the 2019-2020 Stanley Cup playoffs presented a unique challenge in testing the mental limits of the players, coaches and staff, outside of hockey.

It's mic'd up Monday and @CFish61 is giving you an inside look at bubble life: pic.twitter.com/aacZyaBf1m

“It honestly was like groundhog day,” Coyotes coach Rick Tocchet said during a Zoom press conference recently. “It was the same thing, and you got to stay mentally strong.”

The Coyotes divided their three weeks at Sutton Place and JW Marriott in the heart of Edmonton with limited access to amenities and services through a tunnel-like system from hotel to arena.

Each hotel had an assigned conference room for each team. Like normal road trips, the Coyotes played card games and ate meals together around tables, but with COVID-19 safety measures in place.

“We tried to learn how to operate day-to-day,” Tocchet said. “You had to go through a lot of security people. Only three or four restaurants.”

On off days, the Coyotes embraced the “bubble life” with available recreational activities outside, which included table-top games, food trucks, and a basketball courtyard with large monitors to watch the other teams.

“During the playoffs, when you’re on the road, you get that bubble life in a way,” Coyotes captain Derek Stepan said. “You’re constantly hanging out with your group of guys. It brings everyone together. We were able to go to some hockey games. They had some golf simulator set up for us. I think the guys adjusted to the fact that this is the world we live in.”

After moving on from the qualifying round, the Coyotes enjoyed a field day in Commonwealth Stadium – home to Edmonton’s Canadian Football League team. The players and coaches were able to take their minds off of hockey with soccer, football, and friendly cornhole competition.

“It was really good to get some fresh air,” Stepan said in a Coyotes video. “At least being in the sun and seeing some grass, even if it’s fake, is really good.”

While the Coyotes got an opportunity to have some fun in the bubble, the majority of their free time was spent in their own confines.

“In isolation, when you’re by yourself, you think a lot and think about being out of there with your family. It can wear on your energy level,” Tocchet said. “For the most part, I thought they did a good job.”

Staying in close quarters for extended periods of time. Testing constantly for COVID-19. Being away from family and friends. All these conditions, in addition to playing in the high intensity of playoff hockey, can add to players’ fatigue.

“One hundred percent, you could feel it,” Tocchet said. “I talked to some other coaches. That was the biggest fear. It’s basically monotonous every day. We had 2 1/2 blocks with nothing to really to do other than hockey. This is where mental will comes in.”

Looking back at his team’s experience in the bubble, Tocchet believes that a balance of skill and mental stamina will pave the way for the eventual Stanley Cup champions.

“To hang around there in that bubble, they’re going to go through that period,” Tocchet said. “The teams that go far, obviously you got to have the talent, but you also have to have the strong mental fortitude to go with it for sure. I think the team that wins this is going to be one mentally strong team.”