Recent cost-cutting changes to the Postal Service have reduced service and slowed delivery times of medicine, checks and other vital mail, say critics, who raise fears that the cuts will affect mail-in balloting in November. That could hit Arizona, which up to 90% voting is by mail, particularly hard. (Photo by Gregory Jordan/Creative Commons)

WASHINGTON – Spoiled medication and missing rent checks are just some of the problems that Arizonans have seen as a result of recent postal system changes, Sen. Kyrsten Sinema said during a grilling Friday of Postmaster General Louis DeJoy.

“Over the past week, my office has heard from over 18,000 Arizonans about the importance of the Postal Service,” but many also said that the service is getting worse, the Arizona Democrat said during the Senate Homeland Security and Governmental Affairs Committee hearing.

DeJoy has come under fire for several cost-cutting changes that have led to disruptions and delays in deliveries, and raised fears about the agency’s ability to deliver mail-in ballots in this fall’s presidential election.

DeJoy defended the changes that he said were made to cut costs and have long-term efficiency benefits at an agency that stands to lose $11 billion this year, after losing $9 billion in fiscal 2019.

He told lawmakers that there “will be absolutely no issue” with mail-in ballots, noting that the Postal Service handles two to three times as much mail in a single day as it expects to handle during election week.

DeJoy also said he has ordered a pause in some changes until after Election Day “given recent customer concerns.” But the House is scheduled to vote Saturday on a bill that would mandate that freeze until the end of the year or the end of the COVID-19 pandemic.

The rare Saturday vote on the “Delivering for America Act” was blasted by Republicans, who accused Democratic leaders of manufacturing a crisis.

During a hearing on the bill Friday, Rep. Debbie Lesko, R-Peoria, quoted a Wall Street Journal opinion piece criticizing “unsubstantiated” claims by Democrats that DeJoy’s moves are part of a White House conspiracy to suppress the vote.

“I agree with the Wall Street Journal editorial board,” Lesko said in the House Rules Committee hearing. “This is nothing more than a made-for-TV, phony crisis timed for the weekend TV shows and Republican convention.” 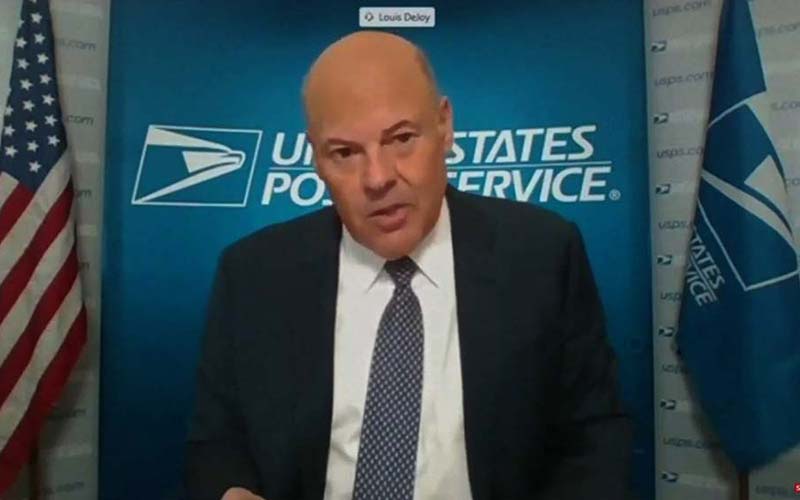 With the House poised to vote to reverse Postal Service cuts, Postmaster General Louis DeJoy defended the agency’s ability to handle an influx of mail-in ballots this fall and downplayed the impact of changes since he took over in June. (Photo courtesy Senate Homeland Security Committee)

The Republican National Convention is scheduled to start Monday.

The bill has one Republican and 156 Democratic co-sponsors, including four from Arizona: Democratic Reps. Raul Grijalva of Tucson, Tom O’Halleran of Sedona, Ann Kirkpatrick of Tucson and Greg Stanton of Phoenix.

Stanton and O’Halleran met with local leaders and community members this week, according to an emailed statement, to discuss how changes to the Postal Service have impacted their lives.

“A fully functioning Postal Service is critical to Arizonans’ lives and livelihoods,” Stanton said in the statement. “It supports small businesses and job seekers, ensures veterans and seniors get their benefits and life-saving prescription medication on time and it is a lifeline to our rural and tribal communities.”

Since DeJoy took office in June, changes at the Postal Service have included removal of blue post boxes and mail sorting machines that DeJoy said Friday had been underperforming. He had also ordered a stop to overtime pay and has reorganized agency roles.

In a press conference Tuesday, Grijalva called for the reinstatement of overtime for postal workers, no closures of facilities, no reduction of hours or service standards. He said the service needs to be protected, noting that 60% to 70% of people in Tucson and Pima County vote by mail.

Mail-in balloting was also cited by Sinema, who said Arizona has led the country in mail-in voting and expects as much as 90% of votes cast by mail this November, around 2.4 million ballots.

Besides insisting that the service has the capacity to handle the influx of ballots, DeJoy said there will be additional resources on standby for the election and aggressive efforts to ensure the process flows smoothly and timely. He assured members that there will be no policy changes on ballots, including any closure of production plants.

“It is Postmaster DeJoy’s commendable attempt to reduce those excess costs that are now being cynically used to create this false political narrative,” said Sen. Ron Johnson, R-Wisconsin.