A young boy runs past Templo Hindu in Panama City on March 10, 2020. South Asians are increasingly using Panama as a gateway to the United States, but some have opted to stay and build a vibrant expatriate community. (Photo by Nicole Neri/Cronkite Borderlands)

LA PEÑITA, PANAMA – Salman Khan is 9,000 miles from his home country of Pakistan. He crossed one of the most dangerous jungles in the world. He sits in a squalid camp overseen by the Panamanian border patrol, unsure of what his future holds. But to Khan, Panama represents a path to freedom.

“I want to live a free life,” said Khan, who is gay and left Pakistan because he was persecuted. “So I leave. I fly.”

Two-thirds of the more than 22,000 migrants who in 2019 crossed the dangerous Darién Gap – a 60-mile wide, dense jungle along the border of Colombia and Panama – are from Haiti and Cuba.

But surprisingly, migrants from far-flung places in Asia account for the next-largest group to brave the Darién. Most hope to eventually land in the U.S and Canada. During the crossing, they encounter wild animals, venomous snakes, challenging terrain and human predators.

According to Panama’s National Migration Service, Asians made up 21% of the 87,191 migrants detained by SENAFRONT, Panama’s border patrol, during an eight-year period.

“We have started to see an increase in migrants from African countries and Asia,” SENAFRONT Director General Oriel Ortega Benitez said. “From 2014 until now, migration flows have been massive.”

The third, fourth and fifth-largest populations of migrants came from Nepal, India and Bangladesh, respectively, from 2010-2018.

Of the migrants detained in the Darién region in 2019, 17% were from Asia, according to data provided by UNICEF.

Most of the migrants seek economic stability or religious freedom.

Khan said he fled after he got death threats because he’s gay.

“There was a threat to me, text messaging, calls from the people from the religious groups,” Khan said. “They don’t want me to stay there. They want to kill me. You know, suddenly I hear from another guy that ‘there is a guy who’s waiting for you for 15 days with a pistol, with a gun, to kill you because you are a threat to the environment. You’re a threat to the community where I live.'”

Khan said he planned his journey on the internet. He flew to Brazil and made his way through Colombia, crossed the Darién jungle and arrived at SENAFRONT’S Bajo Chiquito migrant camp in Panama. To him, the journey was worth it.

“I’m not after money or something like that,” Khan said. “I’m just after my life, I’m after … my freedom.”

Once migrants reach the Bajo Chiquito camp, they can pay $25 to locals to take them by boat to the next camp in La Peñita or make the 6-hour walk. At La Peñita, SENAFRONT gathers biometrics using a U.S.-provided system known as BITMAP, and the agency attempts to verify migrants’ identities using background checks. Those who pass the background checks can continue on their journeys north.

“We have a migration policy that has been evolving over the years,” said Alexis Betancourt, commander of SENAFRONT’s eastern brigade, which patrols the Darién region.

Part of that evolution is a policy called “controlled flow” that both monitors migrants and keeps them heading north.

“Controlled flow begins with humanitarian help, so people can stay alive and be healthy – be fed,” Betancourt said. “We eventually filter people through a database that is shared with other countries (BITMAP), which allows us to prevent security, health or other types of crises – or even terrorist acts. We are not only working for Panama – we are working to help the rest of the continent.”

The migrants wait at La Peñita for transportation to the next camp in Chiriqui, near the border with Costa Rica. Under the controlled flow system, about 100 migrants a day are bused to Chiriqui. They wait there until they can enter Costa Rica, which also operates a controlled-flow system. 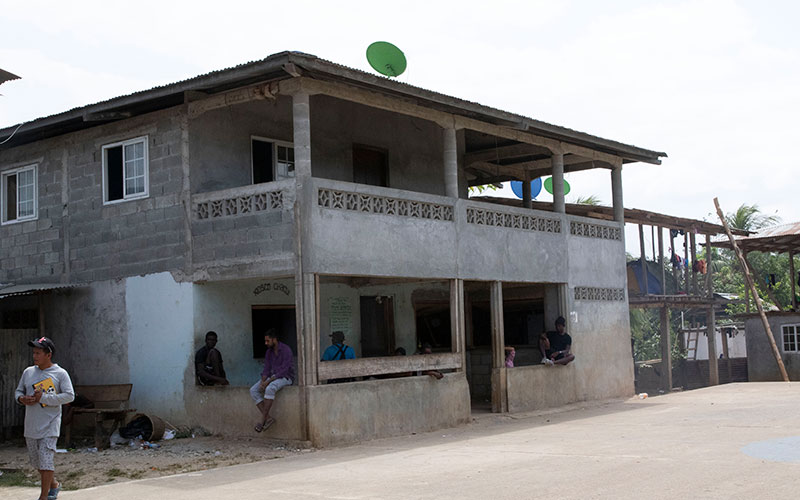 Migrants who can afford it rent rooms in homes and buildings next to the Bajo Chiquito migrant camp in Darién province, Panama. (Photo by Ranjani Venkatakrishnan/Cronkite Borderlands Project)

Not every migrant who travels to Panama from Asia is en route to the U.S.

Singh’s story starts 11 years ago. He was 33, and the transportation business in India was declining. He could not find another job and searched for work in Dubai and Qatar. Singh discovered the migration route through South and Central America from a private immigration agent.

Immigration agents work throughout India. They help people migrate to other countries such as the U.S. or Canada and provide advice on getting visas and jobs abroad.

“The people who traveled with me were all told different things and paid different amounts,” Singh said. Singh found no economic opportunity in Ecuador. He believed the agent tricked him.

Singh planned to go to Colombia and take a ship to Guatemala.

“We had no plan to go to Panama,” Singh said. But when they reached Colombia, Singh realized there were no ships to Guatemala.

Members of his group ripped apart their passports to protect their identities, as the agent advised. Many migrants do the same thing.

“They know they don’t have a case and their asylum application would be rejected, so they don’t even bother applying for that,” said William Spindler, spokesperson in Panama for UNHCR, the United Nations refugee agency. “But they know that not having passports or documentation makes it harder for Panamanian officials to deport them.” 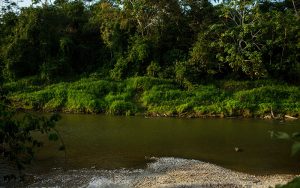 The Tuquesa River in the Darién province of Panama serves as a travel conduit for migrants arriving and leaving from the Bajo Chiquito migrant camp. For most of its route, the river flows through dense jungle. (Photo by Nicole Neri/Cronkite Borderlands Project)

Singh entered the jungle with two people from Pakistan, two from Somalia, and a person from another African country.

For provisions, Singh said they carried bread, biscuits, apples, sugar and a few cans of Red Bull. The supplies lasted one day. It took them five days to cross the jungle, and they ate whatever they found. They walked only during the day because it was unsafe to travel at night.

Khan recounted a similar experience from his trip through the jungle earlier this year.

“I saw a dead body in the jungle,” Khan said. “I saw a couple of snakes, very venomous snakes. I lived for three or four days in a jungle with no shelter, without food. You can only drink the water from the river. And if you got so hungry, you can eat leaves from the trees. That’s all.”

Migrants often follow the rivers through the jungle, according to Osualdo Quintero, a major at a SENAFRONT station in Metetí, a small town an hour’s drive north of La Peñita. They take different routes depending on what they have learned via Facebook or WhatsApp groups. Quintero said they usually have a family member in the U.S. or another country guiding them and sending them money via Western Union.

The migrant camp Bajo Chiquito is the destination for many migrants emerging from the jungle.

Khan said he spent three or four days in Bajo Chiquito before he was transported to La Peñita.

La Peñita was designed for about 100 migrants. But in early March, it housed about 800.

“There is not enough food, water, or space to receive them,” said Diana Romero, a protection and migration technician at UNICEF Latin America and Caribbean.

Khan had multiple complaints about the camps, but he was particularly bothered by one nuisance: Oh, my God … too many mosquitoes.”

He expected to find some kind of shelter, but had to rent space in a home of a local.

Khan and a family from Gujarat, India, paid a woman a dollar per night to stay in her small home.

Janet Rodrigo, a resident of La Peñita who regularly offers her hut as shelter, raises chickens and sells their eggs. he welcomed Khan.

Rodrigo said she has sheltered about 400 people over the past four to five years. 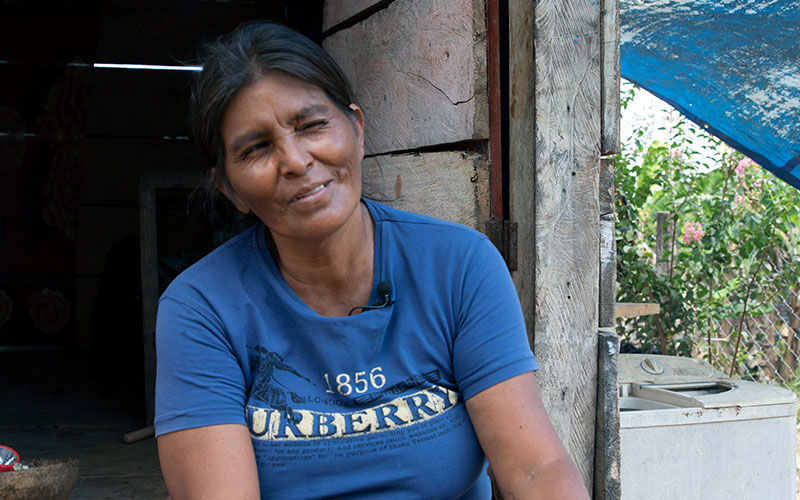 Khan said Rodrigo was the only person who helped him and his group in La Peñita.

“Because she knows,” Khan said. “She knows that the people, these people came from a jungle, from long-distance countries.”

Khan said he didn’t know how long he would have to wait in La Peñita.

“Maybe they will tell us to stay here for two months or three months without medical stuff, without anything,” he said. According to SENAFRONT, some migrants have longer wait times because their home countries do not cooperate with the background checks. SENAFRONT said they will not allow migrants to continue north until they verify migrants are not a threat.

Wendy Mow, who is in charge of monitoring and evaluation at HIAS, a nonprofit that works with refugees, said some South Asians don’t find the food from SENAFRONT meets their dietary needs, so they purchase pots to cook for themselves. SENAFRONT provides rations of rice, beans, lentils, grains, fish and other kinds of meat. Vegetables are not available.

Migrants can claim asylum in Panama and stay in the country, but, according to SENAFRONT’S Quintero, they usually decline. Asian migrants often don’t know anyone in Panama or see themselves assimilating there because of language and cultural barriers.

But should they stay, successfully applying for asylum or refugee status is difficult.

“They can ask for asylum, they can seek to be refugees,” Ortega said. “They need to provide enough information to sustain claims that they are in danger in their country of origin.” 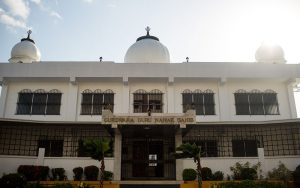 Singh applied for asylum in Panama, seeking to join a community of Indian immigrants in the country. Krishnan Lal, a consular official at the Embassy of India in Panama City, said about 15,000 Indians live in Panama, primarily coming from the states of Gujarat, Sindh and Punjab.

The asylum process in Panama takes two to three years. The agency that reviews asylum applications has a backlog of 16,000 cases and will ultimately approve only a few – only 86 over the past two years, according to Spindler.

“If asylum is rejected, the person will either be deported or handed over to migration services to obtain a visa,” Spindler said.

Frequently, migrants stay in the country undocumented and work for cash.

Singh didn’t qualify for asylum, and he had to go another route. He was advised to get steady work to show that he could support himself and contribute to the community before seeking legal residency.

Singh has lived in Panama for eight years. He makes $1,200 per month. He got his passport back three years ago from the Indian Embassy by stating that he lost it.

In January, Singh was granted temporary residency, valid for two years. After that, he can apply to renew his status for another five years. If all goes according to plan, Singh can become a permanent resident of Panama in 2027.

Meanwhile, Khan awaits his turn to travel north. He hopes to go to a country where people are open minded and accepting of gay people.