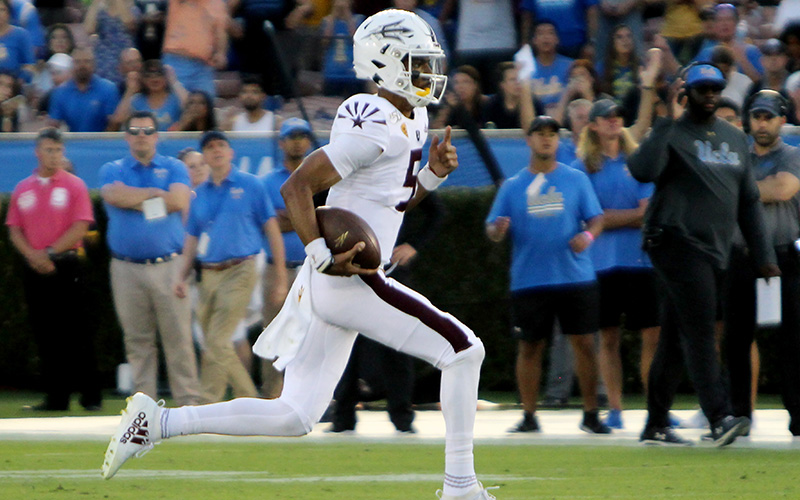 Arizona State quarterback Jayden Daniels, along with the rest of his Sun Devil teammates, will not compete this fall after the Pac-12 postponed all fall sports to 2021. (File photo by Kennedy Wilkerson/Cronkite News)

PHOENIX – When Ray Anderson, Arizona State’s vice president for university athletics, first heard about the possible long-term heart issues connected to coronavirus, it immediately made him think of his father’s sudden death from a heart attack when Anderson was just 9 years old.

Anderson feared a similar outcome might await an ASU athlete if the Pac-12 Conference were to move forward with competition this fall.

“Just the thought of six or seven or eight years from now (that) one our student-athletes would fall over like that, and while under our care, we didn’t do everything we could to prevent him or her from being in that situation, that affected me,” Anderson said during a video call with media late Tuesday afternoon.

His comments follow the announcement earlier in the day of a unanimous decision by the Pac-12 CEO Group to postpone all sports competitions through the end of the 2020 calendar year, a result of the ongoing coronavirus pandemic and its associated risks.

“This was an extremely difficult and painful decision that we know will have important impacts on our student-athletes, coaches, administrators and our fans,” said Larry Scott, Pac-12 commissioner, during the webinar with media members. “I know nothing that we can say will ease some of that disappointment.”

Teams may still practice, but games will not happen across the conference until the calendar flips to 2021.

The news comes on the heels of an announcement from the Big Ten Conference Tuesday morning that it would postpone its fall season. However, the Pac-12 went one step further, saying its teams, including winter sports like men’s and women’s basketball, will not play any games until at least Jan. 1.

Anderson acknowledged the difficult decision the conference faced, but said the priority throughout the process was clear.

“We want to play in the worst way, but not at the risk of health and safety,” Anderson said.

Eleven days ago, the Pac-12 announced a reduced football schedule, limiting its teams to games only against conference opponents.

Michael Schill, University of Oregon president and chair of the Pac-12 CEO Group, said conference leadership wanted those games to happen this fall. But a variety of factors led conference officials to ultimately decide that it just wasn’t safe from their perspective.

“There’s just too many questions,” Schill said. “There’s too much uncertainty right now that (would make us) feel comfortable beginning contact sports.”

Schill pointed to, among other things, the disease’s spread across the Pac-12’s six-state footprint. As of Aug. 11, the Centers for Disease Control and Prevention reported more than 930,000 COVID-19 cases across Arizona, California, Utah, Oregon, Colorado and Washington. That’s 18% of the more than 5 million cases reported across the country. California has more reported cases than any other state in the U.S. (561,911), and Arizona’s 187,523 cases rank seventh nationally.

“With the inconsistencies in the virus, and then with this additional information coming out, that says you just don’t have enough to make decisions, particularly going into contact sports with these young men and women, to put them at risk,” Anderson said. “And as the athletic directors and medical folks and presidents and chancellors and coaches and … commissioner on the way down, we are just not going to do that.”

A big focus of those decision makers – growing evidence of the potential impact COVID-19 has on the heart.

A study published by the Journal of the American Medical Association on July 27 looked at the cardiac effects on 100 patients in Germany who had recently recovered from COVID-19. MRIs conducted in the study showed 78 patients with some abnormality in the heart and 60 exhibiting “ongoing myocardial inflammation,” which could be representative of myocarditis, defined by the Mayo Clinic as an inflammation of the heart muscle that can reduce the heart’s ability to pump blood.

The study said there is a “need for ongoing investigation of the long-term cardiovascular consequences of COVID-19.”

“There is some emerging data about some health threats that affect athletes, and specifically cardiac side effects of potential COVID infections, that we don’t know enough about,” Aukerman said.

Pac-12 leaders acknowledged that many players across the country have said they want to play. But Anderson said he believes the schools have a greater responsibility than just competing on the field. And for now, there is too much uncertainty.

“We don’t have to play until it’s safe, and we can literally guarantee the health and safety of our student-athletes,” Anderson said. “Not just now, but their lives going forward, because we don’t know the impact going forward. And until we have more clarity, we’re not going to go forward.”

It’s a cautious approach that Anderson believes is appropriate.

“I can’t be more proud of our medical advisory group in the Pac-12 for calling out the caution to say, ‘Hold it. Stop it,'” Anderson said. “This isn’t worth somebody dying of a heart attack on our field; coach, player, either – now or five or six or seven years from now – when it could have been prevented.”