The Black Lives Matter movement was the focus of protests this summer, including this protester in Phoenix, after the killing of George Floyd by Minneapolis police. That lead to discussions of “the talk” that generations of Black parents have had with their children on how to be safe when confronted by police. (File photo by Blake Benard/Special for Cronkite News)

PHOENIX – For any teen, getting a driver’s license is a rite of passage – a small taste of freedom in their adolescent lives.

But for Black teens in America the little bit of freedom that comes with car keys also comes with “the talk”: The time when Black parents sit their children down and explain to them what to do if stopped by a police officer.

It’s been happening for generations. Sometimes the talk comes earlier in life. Sometimes it’s in response to a headline-grabbing death of a Black person who had been stopped by police.

In the wake of recent deaths of Black people at the hands of police – George Floyd in Minneapolis, Dion Johnson and Muhammad Muhaymin Jr. in Phoenix and Breonna Taylor in Louisville, the latest in a history of such killings – Cronkite News asked Black leaders in Arizona to talk about the time they had the talk.

Tempe Mayor Corey Woods remembers details of “the talk” with his dad nearly three decades later. For Flagstaff Mayor Coral Evans, it brought memories of being talked to by her mother – then having the talk with her own daughter.

Arizona State University football coach Herm Edwards said the talk with his father was not one specific event but what he called a series of small life lessons. That was the case for Arizona Rep. Geraldine Peten, D-Gila Bend, who knows that those are lessons and talks that will continue for generations to come. 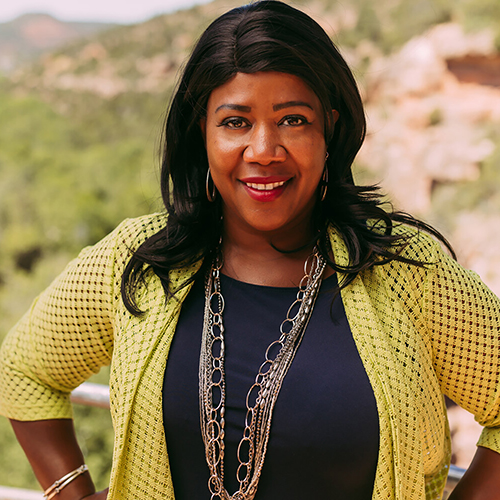 Evans, a third-generation Arizonan, recalls being a teen who was giddy with excitement after just getting her first car, but before she could take it out for a drive her mom sat her down for the talk.

“You need to really understand what can happen to you,” Evans recalls her mom saying. “She goes, ‘If you see a police officer behind you – if he stops you, you need to never reach for anything. And make sure that your hands are on the steering wheel, and when they come up to the window, you be extremely courteous.'”

“She was pretty clear,” Evans said. “You should just drive with your wallet on the seat next to you” so that she would not have to reach for her purse or anywhere else in the car.

But when Evans was stopped shortly after the talk with her mother, her wallet was under her seat. With her mother’s words echoing in her head, Evans absolutely refused to reach for it, telling the officer instead that she had forgotten it at home.

Fortunately, Evans got off with a warning for driving without a license, but had to show up to the courthouse the next day to prove she had one.

When it came time to have the talk with her own daughter, Evans said it was her daughter who came to her. It happened shortly after the passage of SB 1070, Arizona’s get-tough “show me your papers” immigration law. Evans said her daughter – whom she described as half-Black, half-Mexican – came home one day, absolutely frantic and asked for her passport.

“She was just like – (then-Maricopa County Sheriff Joe) Arpaio, Arpaio is going to come in if I don’t have my passport and then take me away,” Evans said. “And I was like – are you serious?

“And then I stopped, because I’m out here doing organizing, I’m out here in the middle of this neighborhood that I support which was 50% Hispanic, and I guess I had never really viewed it from her viewpoint,” Evans said.

She sat her daughter down for the talk then and there.

For Evans, who felt a loss of innocence when she got the talk, said it was just as heart-breaking to have to tell her daughter that she had to control herself so she is not “perceived as the angry ethnic woman, the angry Black woman.” 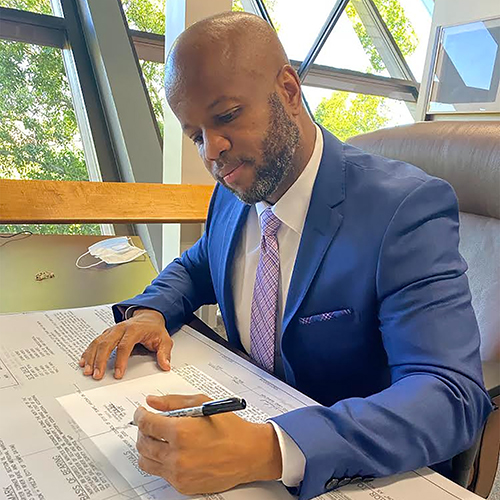 Woods knew exactly what an interview about “the talk” meant. For Black people in America, he said, those two words strike a chord.

“I think there would be people that you might send that to and they might say, ‘What talk? Can you be more specific?'” Woods said. “But that obviously shows you how prevalent those conversations are in African American households throughout the country.”

Woods was 16 and had just gotten his license when his father took him to their kitchen, sat him down and then handed over the car’s keys, registration and insurance. There was still one more thing he had to give to his son.

“He, you know, kind of then gave me the talk,” Woods said.

“Listen, I totally feel comfortable about you going out and driving and going to see your friends or going to the movies or whatever it happens to be,” Woods recalled his father saying. “But here are the things that I think I need to make you aware of.”

Woods said he still remembers the conversation vividly and that it’s something that will always stick with him. 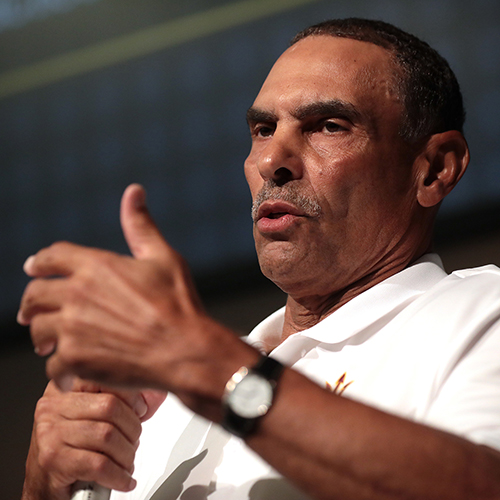 For ASU football coach Herm Edwards, the talk was more of an ongoing conversation with his father about race in America, a conversation he’s having with his daughters now. (Photo by Gage Skidmore/Creative Commons)

Edwards said he never really had a specific “talk.” Instead he had ongoing conversations with his father about being Black in America, starting when Edwards was around 10 or 11 years old.

Edwards was born in New Jersey to a Black father and a white mother but grew up in California, which was at the time the safest place for interracial families in America. He said the first lesson his father gave him was “know who you are.”

“You can never compromise your name, or your value, for opportunity, money or fame. Also, never stand in silence,” Edwards recalled. “When moments of injustice and racism appear, make sure you use your voice to be the voice of reason with solutions.”

Edwards said when it comes to law enforcement, he was taught that a person with authority has to prove that they’re worthy of it and that it was not just carelessly handed to them. He was taught to always question “the good things” people immediately assume about those in power.

“When you see people with authority, you assume they’re going to do the right thing. But their actions and their words expose them if it’s not done in a proper way,” he explained.

With two young daughters of his own now, Edwards is continually having conversations with them about race in America, and said he plans to continue giving them life lessons like his father did.

Edwards said he has hope for young people in America, and is confident they will continue being at the forefront of the ongoing civil rights movement unfolding in the country, now and beyond. 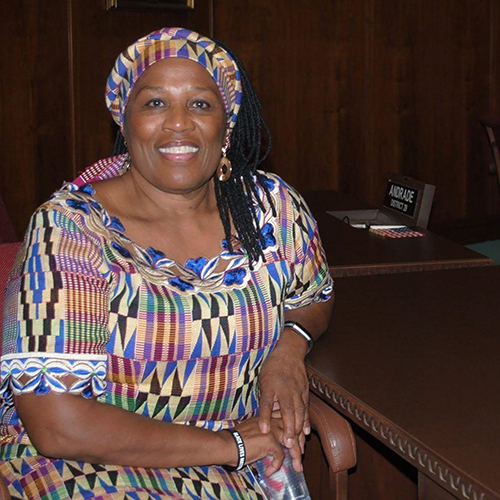 State Rep. Geraldine Peten, D-Gila Bend, grew up in the Jim Crow-era South, but found herself still having to teach her own son how to cope with racism years later, despite the passage of civil rights legislation. (Photo courtesy Rep. Geraldine Peten)

As a child growing up in the Jim Crow-era South, Peten also never exactly had a talk. Instead, family members raised her with very certain behaviors, that she followed at all times – no questions asked.

Those included knowing not to look white people in the eye, and to step off the sidewalk any time a white person approached.

“We did what my mother, my grandmother and my grandfather did. We followed their lead,” Peten said. “And I was raised in a generation that – if you spare the rod, you spoil the child – so when we were told to do something, we did it.”

In a time of sanctioned segregation, there was no choice but to comply. Peten knew that everything her mother taught her – including the mantra “if you get into it, you better know how to get out of it” – was done to protect her from the painful reality of growing up Black in America.

As Peten got older, the passage of the Civil Rights Act, fair housing and affirmative action laws gave her hope the “racism was going to dissipate and we could all live a quality life.” She realized how naive that was when her son came home from nursery school, devastated that another child called him a slur and said they could no longer play together because of his race.

It was a shock to Peten, who said there were no issues in the first six weeks at the New Jersey school she called a “little model UN” because of its diversity.

“There were all ethnicities or races or colors, and everyone was there – fair and equal – so there was never any problem with that,” she said. That made the confrontation with the other child all the more troubling.

“I mean, it devastated him. It was like a whack upside my head,”Peten said. “I thought, ‘Oh my God, I didn’t teach my child how to deal with racism because I didn’t think I would have to, so I hadn’t taught him anything.'”

She had her own talk with her son, telling him, “We are very strong people. The fact that we were abducted and enslaved in this country, and tortured and lynched … the ones of us that are here are strong. We’re survivors.”

They eventually had the talk, where Peten told her son how to behave in the presence of police and that his only goal in these situations was to get out alive. It’s a talk she knows will continue down to her eight grandchildren.

“If you get out alive and you came home and you could tell your parents what happened, then we can get a lawyer to defend you, but we can’t do that if you’re dead,” she said.