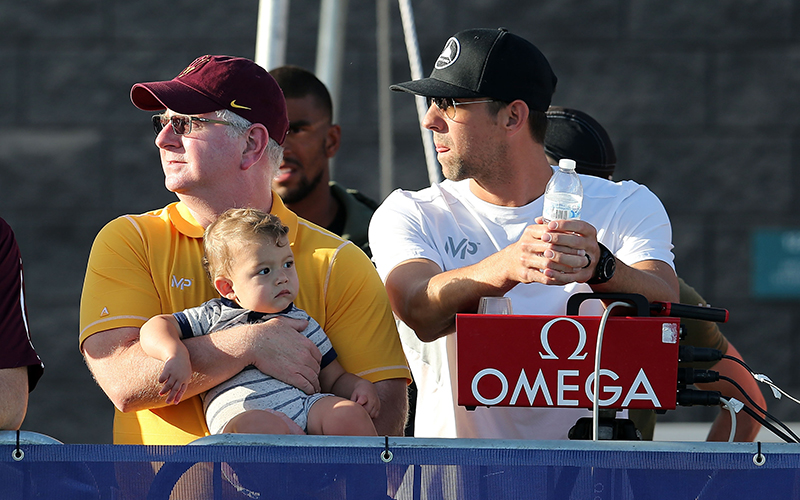 Arizona State swimming and diving coach Bob Bowman (left), shown here with Michael Phelps and Phelps’ son, Boomer, will have his team redshirt in 2020-21 so it can have “maximum flexibility” in the next six months. (Photo by Chris Coduto/Getty Images)

Swimming and diving coach Bob Bowman came up with a unique solution: He is having every member of his team redshirt for the 2020-21 season.

“The biggest driving force behind this decision was to give student-athletes and their families maximum flexibility in navigating the next six months, while protecting their NCAA eligibility and offering some much needed clarity to our path forward,” Bowman told Cronkite News Monday.

The decision could have a ripple effect on college athletics, especially sports with smaller rosters that could benefit from an extra year of training.

ASU is coming off a shortened season that included cancellation of the 2020 NCAA Championships. Because a swim season can often last seven months, Bowman didn’t want his athletes to miss that again. They will spend this school year training and chasing Olympics aspirations, he said. They will be enrolled as full-time students and many can pursue graduate degrees in the five-year window.

“Our goal as a department is to provide an elite student-athlete experience,” Vice President for University Athletics Ray Anderson said in a statement, “and this methodology will allow an additional year on campus for these student-athletes to train and achieve championship performance together, but also realize new academic goals.”

In late June, Chandler High School swim coach Kerry Croswhite experienced fever, aches and chills. After an initial COVID-19 test came back negative, he returned for another when he felt discomfort in his chest.

That test was positive and marked the beginning of a month-long battle with the virus that ended up taking his life Tuesday. He was 61.

“This is a hard one,” his wife, Laurie, wrote in her Caring Bridge journal. “Kerry lost his battle at 6:01 p.m. this evening. He fought so hard. The song’ These Are the Days’ by Van Morrison was playing on his Pandora when he passed. Think of him whenever you hear it.”

The popular coach has been the subject of numerous tributes, including a decision by the Chandler Unified School District to name the Chandler High pool after him, Laurie said. He was also recognized on the “Today” show and “NBC Nightly News.”
During his 15 years at Chandler, he led the swim team and was also an assistant softball coach.

The NHL finished its third phase of return to play on Sunday with zero positive tests for COVID-19. The NHL reported only two players overall have tested positive during their third phase.

All 24 teams, including the Arizona Coyotes, have entered the secure zone in Edmonton and Toronto for the beginning of the fourth phase. All 52 Coyotes players and staff will be tested daily during the fourth phase. The NHL said it will not provide information on the identity of the players or the clubs that have tested positive.

The Coyotes play the Vegas Golden Knights in an exhibition Thursday. They will make their return to regular season play against the Nashville Predators on Sunday.

After four days of competition, Major League Baseball announced Monday it is postponing at least two games after multiple members of the Miami Marlins tested positive for COVID-19. ESPN reported that number could be 14 or higher.

Monday’s games between the Marlins and Baltimore Orioles at Marlins Park and the Philadelphia Phillies and New York Yankees at Citizens Bank Park have been postponed.

Other teams are paying attention,

“Let’s not get complacent,” Diamondbacks manager Torey Lovullo said on a conference call with reporters Monday. “We’ve had a successful weekend (with no positive tests) and we’re successful because we have done everything that we’re supposed to. Nobody’s going out. We’re staying in the hotel. We’re washing our hands. We’re wearing our masks where we have to.”
He also said there are “certain behaviors that I’m being made aware of” that he would like his players to correct but did not expand. 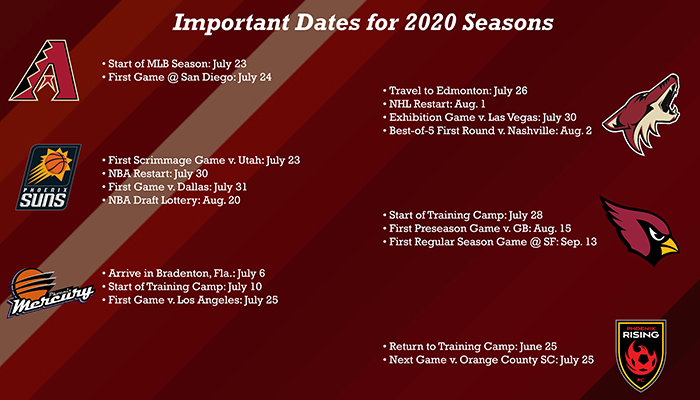 After losing 99-76 to the Los Angeles Sparks on Sunday, members of the Phoenix Mercury said they are adjusting to life in the WNBA bubble.

Although the routine of the WNBA season is different in the bubble, Griner hopes the team can adjust relatively quickly.

“Being physically there isn’t always going to be the option,” Griner said. “We’re in a world now with technology, Zoom meetings with the media. You can still get everything done. We just have to change how it looks. The world is crazy, and we can adapt.”

Coach Sandy Brondello told the media that she has faith that the WNBA’s bubble is a safe and viable option for this season.

“I think this is the safest place to be,” Brondello said of the IMG Academy in Brandenton, Florida. “We’re getting tested every day, we’re in an environment where it’s just all of us, we are wearing masks and gloves when needed, we have a support staff that’s basically feeding us at the IMG. So I feel good. I think the WNBA and the medical people have done a very good job putting us in a safe environment.”