Mail-in voting was already popular in Arizona, where close to 80% of voters may cast ballots by mail. But it’s getting an extra push this year from elections officials who are looking for ways to reduce crowding at polling places because of concerns about COVID-19. (Photo by jamelah e./Creative Commons)

PHOENIX – A lot goes into running a successful election in a normal year, but in the era of COVID-19 that also includes 3,200 gallons of hand sanitizer.

That’s one of several items on a shopping list that includes gloves, masks and face shields, as state elections officials work to make sure they have safeguards in place to protect the vote and voters in the Aug. 4 primary.

With that election less than two weeks away, Arizona Secretary of State Katie Hobbs said she is optimistic.

“For both the primary and the general I just feel really confident about being ready to handle the situation,” Hobbs said this week. “I know that things are going to continue to come up that we’re not anticipating, but my office spent all of last year really laying the groundwork to be prepared.”

Hobbs delivered much the same message Tuesday during a virtual meeting of the National Association of Secretaries of State, where elections officials traded stories and tips on how they are “Preparing for Increased Voter Turnout in November 2020.”

For Arizona, that has included a renewed emphasis on mail-in voting, an increase in the use of curbside voting and the development of safety recommendations, released Monday in a pair of guides for voters and poll workers. 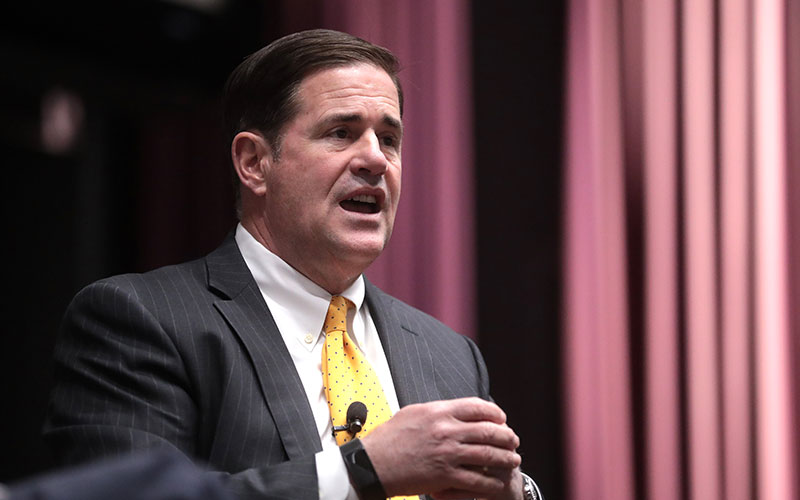 Many of the recommendations are familiar to anyone who has lived through the last four months of COVID-19: Wear face covering, stay 6 feet from others where possible, wash hands frequently and stay home if you feel sick.

The preparations also include $9 million in funding from the federal Coronavirus Aid, Relief and Economic Security Act that was announced earlier this month by Hobbs and Gov. Doug Ducey. Most of the CARES Act funding will go to county elections officials to help hire staff, expand curbside voting and buy personal protective equipment for poll workers. That includes 10,000 face shields, 10,000 disposable pens and 160,000 disposable face masks for voters who don’t show up with their own, among other items.

Murphy Bannerman, deputy director of the Arizona Advocacy Network’s Election Protection Arizona, said the state appears to be moving in the right direction.

“We’ve gone over what makes the most sense for Arizona and the guidelines she (Hobbs) has provided are a good first step and making sure this year’s election is not only safe and secure but is also healthy for Arizonans,” Bannerman said. “That’s why it is really critical that county recorders are reviewing those guidelines and implementing as many of those as possible in their counties.”

Maricopa County, which has more than 2.4 million registered voters, said it has been working with Hobbs’ office as well as “the Maricopa County Department of Public Health to develop health and safety protocols for all in-person voting locations,” according to a statement from the County Recorder’s Office.

“Poll workers will disinfect high-touch surfaces and pens, and will be required to wear face shields, masks, and gloves. In addition, we will provide masks and gloves for voters who do not have their own,” the statement said.

Registered voters who want to cast a mail-in ballot in the Aug. 4 primary election have until 5 p.m. Friday, July 24 to request a ballot. Details are available from your county recorder’s office or through the secretary of state’s office form here.

The preparations followed the state’s presidential primary on March 17 – just days after Ducey declared a public health emergency. While some states delayed their elections that day because of health concerns, Arizona pressed ahead and reported few problems, although Hobbs said finding sanitation supplies for polls and confirming whether poll workers could work Election Day was a challenge.

In the wake of that experience, Hobbs unsuccessfully lobbied the Legislature to allow the option of an all-mail election in November if the pandemic worsened. While that was turned down, she said it reinforced her offices’ push to expand early voting.

“We need to expand early voting as much as possible, and that is not even just related to COVID-19,” she said. “But now that we’re in the middle of this crisis, I think that having those options available is really critical to helping voters feel safe as they’re passing their ballots.”

It’s not a hard sell in Arizona, where about 80% of voters currently cast a ballot by mail. As of this week, voters in 13 of the state’s 15 counties had already returned about 72,000 of the 440,247 primary election ballots that were mailed out, according to the secretary of state’s office. Pima and Maricopa counties are not included in that number.

Pima County Recorder F. Ann Rodriguez said her office has already received about 100,000 early ballots, including mail-in – helped by the post office, which has opened on Saturdays to deliver them. As for the health precautions, she said her county was already preparing.

Hobbs said the guidelines are meant not only to protect but to educate voters during the pandemic.

“There’s a lot of information out there about vote-by-mail, and I think it’s really important to ensure voters that Arizona has had vote-by-mail for a long time – 20 years – and it is a secure way to vote,” she said. “It’s a safe way to vote and don’t listen to the misinformation about it.”

Given the circumstances, she said she thinks the state is as prepared as it can be.

“Nobody expected that we would be conducting this election in a global pandemic, and it was already going to be a difficult year,” Hobbs said. “I just feel really fortunate that we focused so much on the partnerships. It’s been critical to being prepared.”