Laiken Jordahl, who’s with the Center for Biological Diversity in Tucson, shared pictures of saguaros that have been felled at Organ Pipe Cactus National Monument near Ajo. (Photo courtesy of Laiken Jordahl)

PHOENIX – Conservationists expressed anger and frustration over the U.S. Supreme Court’s decision last month not to hear an appeal to stop construction of the southern border wall. But they’re moving ahead on other legal fronts while monitoring construction as it chews through land marked by towering saguaros and home to the endangered jaguar.

“It’s upsetting that they’re not willing to consider the (Trump) administration’s obvious abuse of the law to fast-track border wall construction,” said Laiken Jordahl, borderlands campaigner at the Center for Biological Diversity in Tucson.

The appeal had sought to block 145 miles of steel-bollard barrier construction in Arizona, California, Texas and New Mexico, arguing that dozens of environmental, health and safety laws were illegally waived to speed wall construction.

The Supreme Court declined to hear that case. But environmental groups were back at the court Wednesday with a new petition to block wall construction, citing an appeals court decision from June that said funding for the border wall was unlawfully taken from the Defense Department budget.

In Arizona, construction on sections of the U.S.-Mexico border wall continues across the San Pedro River, which begins in Mexico and flows north into Arizona near Hereford. Activists contend this barrier will halt the natural cross-border migration of wildlife and make flooding worse.

The Center for Biological Diversity, Defenders of Wildlife and the Animal Legal Defense Fund of Arizona sued the Trump administration on May 12, alleging it unlawfully took $7.2 billion from the Department of Defense to build the wall after Congress refused to appropriate money for construction. These funds had been appropriated for military construction projects, along with the Pentagon’s counternarcotics program.

The lawsuit, which was filed in the U.S. District Court in Washington, D.C., also challenged a series of waivers that allowed the Department of Homeland Security to ignore certain environmental and conservation laws. As of now, there are no further hearings scheduled regarding this suit.

Meanwhile, the Bureau of Land Management announced Tuesday that the Secretary of the Interior has transferred almost 66 acres of federal public lands in Arizona and New Mexico to the Army. The BLM said these transfers will facilitate installation of power and other utility infrastructure and engineering of the road network to provide access along the southern border with Mexico for border security purposes.

Wildlife experts said the continuing construction of any type of border barrier will hinder the movement of wildlife and disrupt the habitat in one of the nation’s most biologically diverse ecosystems.

BREAKING: construction crews broke ground today on a section of #BorderWall across the San Pedro River.

The wall will cut off “continental connectivity,” said Bryan Bird, who is Southwest program director at Defenders of Wildlife.

“You’ve had wildlife, and humans for that matter, migrating north and south along the continent for thousands and thousands of years, and this is the first time that connection could be completely cut by a barrier,” he said.

The animals need this connectivity, Bird added, for mating, finding food, migrating and other activities. More importantly, the barrier threatens the survival of endangered species in the area, including jaguars, ocelots and Sonoran pronghorn. They depend on their natural cross border movement, which, according to Bird, “puts into jeopardy many years of conservation work and significant financial investments.”

According to a report by Defenders of Wildlife, construction of the barrier also will “waste billions of dollars that otherwise could be spent on conservation or other worthwhile endeavors.” The report also mentioned other consequences, including cutting cross border connectivity necessary for the genetic health and persistence of species such as bighorn sheep, bison, Mexican wolves and the Sonoran pronghorn.

It also highlights the danger in restricting the movement of jaguars and some other species that depend on cross border migration for establishing new populations. It also includes what it calls the “crushing of the spirit of cooperation” by ending or complicating the cross border collaboration among scientists, agencies, nongovernmental organizations and citizens.

The same report noted that wildlife in the Arizona desert is extremely diverse, with 60 species of mammals, 350 birds, 100 reptiles, 20 amphibians and 30 native fish, many of them threatened. Nature reserves, including Cabeza Prieta National Wildlife Refuge in the United States and El Pinacate y Gran Desierto de Altar in Mexico, sandwich the border.

So far, these reserves are divided only by vehicle barriers, which are passable even to larger animals. Extending and strengthening border barriers would further split populations of species that must range across the border, including Sonoran pronghorn. 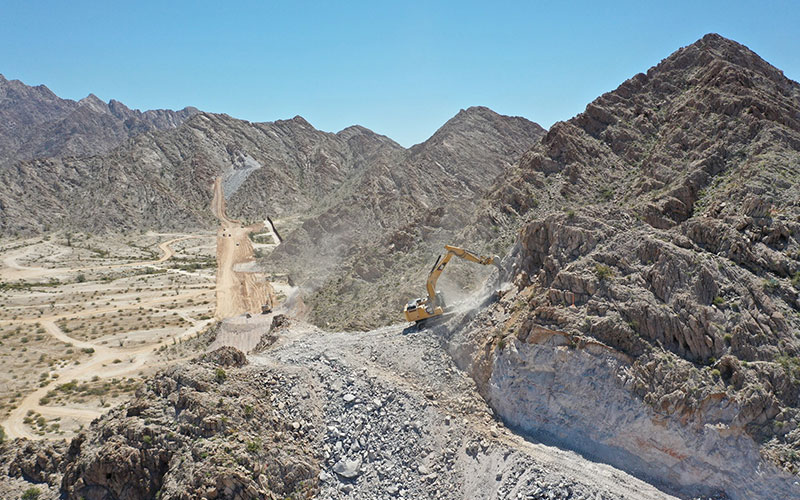 Laiken Jordahl of the Center for Biological Diversity in Tucson visits wall construction sites every week or two to observe the work. (Photo courtesy of Laiken Jordahl)

Paul Enriquez, the acquisition, real estate and environmental director of the border wall program at the U.S. Border Patrol, said designs are being finalized for the construction of large gates across San Pedro that would allow animals to pass through at certain times of the year.

“For a large portion of the year, likely because of monsoons and water flows in the river, those gates will be opened so that you have already an opportunity for even larger animals to move through that area,” Enriquez said. “But if you get outside of that immediate portion of the river, there’s some other vegetated areas that also provide opportunities, you know, for smaller mammals to traverse through.”

Customs and Border Patrol has touted the border wall project on its website, despite a June 26 ruling by a three-judge panel of the 9th Circuit Court of Appeals declaring the diversion of funds unlawful. However, a stay issued by the Supreme Court in July 2019 remains, allowing construction to move forward as similar lawsuits continue through the legal system.

“The 9th Circuit ruling affirms what we already knew – that President Trump illegally stole money from (Department of Defense) to build the border wall,” Jordahl said. “Unfortunately, until the Supreme Court revisits the case or overturns the stay they issued last summer, the construction of this illegal wall will continue to rip our beautiful borderlands apart.”

Bird, whose group was not part of the lawsuit, called the circuit court ruling encouraging.

Speaking about vegetation along the border, Bird pointed out how the habitat would be disturbed and destroyed by bulldozing, the creation of roads, constant patrols by border agents and the area being illuminated at night.

Using explosives for construction purposes and bulldozing saguaros are some other direct negative impacts on the habitat.

“Beyond jeopardizing wildlife, endangered species and public lands, the U.S.-Mexico border wall is part of a larger strategy of ongoing border militarization that damages human rights, civil liberties, native lands, local businesses and international relations,” according to an article by Defenders of Wildlife. “The border wall impedes the natural migrations of people and wildlife that are essential to healthy diversity.”

The construction directly imperils the survival of eight endangered species that reside in the San Bernardino National Wildlife Refuge near Douglas, which Jordahl called “one of the most wild and beautiful corners of our state.”

“Border Patrol has waived the Endangered Species Act to rush construction,” he said, “and that means they’re proceeding with no analysis of how construction will impact these species, some of which don’t live anywhere else in the world.”

In a series of recent tweets, Jordahl shared pictures and videos of the huge saguaros that have been demolished at Organ Pipe Cactus National Monument near Ajo.

“Everyday @DHSGov is busy mowing down ancient cactuses,” he tweeted. “blasting away mountains and building a wall that slices ecosystems in two.”

Customs and Border Patrol disputes this. As of July 10, Enriquez said in an email, 1,158 cactus and other plants have been safely relocated outside the project footprint, in coordination with the National Park Service.

Forty-one conservation laws were waived by the Department of Homeland Security, according to the National Parks Conservation Association, along with more 30 California state laws.

In the meantime, every week or two, Jordahl visits wall construction sites in Organ Pipe, across the San Pedro River, the San Bernardino National Wildlife Refuge, the Cabeza Prieta Wildlife Refuge and the Coronado National Forest to observe the rapidly advancing work.

“We’re seeing a new level of destruction. We’re watching these entire landscapes vanish before our eyes,” he said.