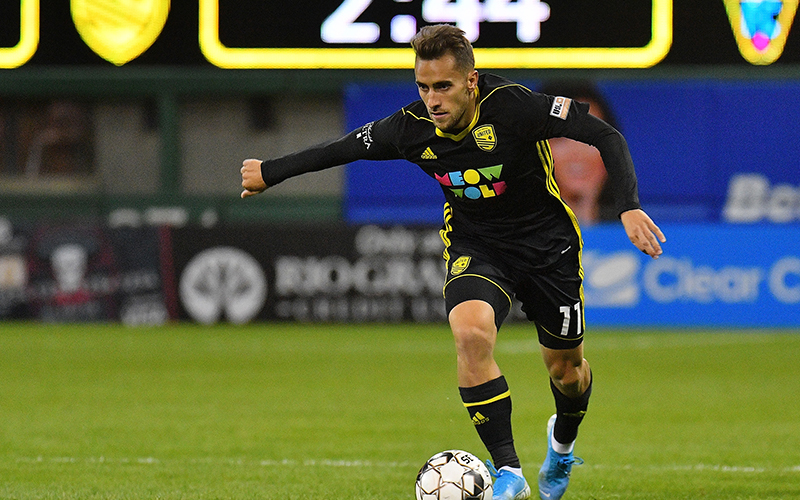 Santi Moar played last season for New Mexico United but said he proudly wears the colors of Phoenix Rising FC in 2020. A young but spirited rivalry is brewing with his former and present team. (Photo by Sam Wasson/Getty Images)

PHOENIX – A new rivalry is brewing in the Southwest.

Phoenix Rising FC and New Mexico United, despite playing only three games against each other, have the makings to be the USL Championship’s next great showdown.

Why? Seventeen yellow cards, three games level past 90 minutes and a surprising offseason decision have all contributed to making a year-old rivalry one of the USL Championship’s most intense.

Forward Santi Moar, who played and contributed to New Mexico last year, signed with Phoenix Rising FC in the offseason because he “wanted to be on a higher, more competitive team.”

“That’s just one person’s point of view I guess.”

He would also go on to say that he thought Moar’s move was “strange.”

“You don’t see that too often where your club’s biggest players go to a rival’s football club,” Mizell said.

The teams have tied three times, although New Mexico secured one win in penalties.

Rising defender A.J Cochran also referred to the three games as draws, but Mizell said that the games were two draws and a win for United.

Moar believes the proximity of the teams – Albuquerque is about 400 miles from Phoenix – is a key factor in the rivalry. Fans want to beat the team next door and he said it’s his goal to make the fans happy

Mizell, who never shies away from sharing the confidence he has in his teammates, believes the rivalry is so heated because “we’re two of the best clubs in the league.”

But a deeper dig reveals these teams were more evenly matched than the standings show.

New Mexico United made the trip to Phoenix to play only its second game in team history.

The game ended in a 3-3 draw with Moar contributing two of New Mexico’s goals. He went on to be named USL Player of the Month in March of 2019.

But it was the intensity of that first game that stood out to Cochran. The referees handed out nine yellow cards, including one to both Mizell and Moar.

Cochran has his own history against New Mexico that has contributed to the rivalry.

In the U.S. Open Cup, Cochran missed a penalty kick that cost Phoenix the game after extra time ended 2-2. New Mexico would go on to defeat two MLS teams on its run to the quarterfinals.

Despite the bitterness between the clubs, Mizell did make it a point to say that “end of the day, it’s just another match.”

Cochran on the other hand, was excited to say that Phoenix is going to get another shot at New Mexico this season, despite not being in the same group.

“I’m definitely happy they’re on the list this year.”

With the USL season only being 16 games due to the ongoing COVID-19 pandemic, it seemed like part four of this new rivalry was going to have to wait.

However, with the league adding three out-of-group games to each schedule due to the ease of travel, the teams will meet again.

In what will be his return to Albuquerque, Moar wonders how his decision will impact the rivalry. He remains in touch with a few players and wanted to “say hi to Cody.”

But Moar made his thoughts very clear when he was talking about how he’s going to treat the upcoming match.

“When you step on the field you don’t have friends.”