Although artificial turf has greatly improved since its introduction in the 1960s, studies suggest it is still likely to cause more injuries among athletes than its more expensive counterpart: natural grass. (Photo by Patrick Seeger/picture alliance via Getty Images)

PHOENIX – Jenaye Coleman, a former Division I lacrosse player at Marquette University, saw many teammates experience gruesome knee injuries in practice and games. During her four years playing on artificial turf, it created a dark cloud of fear about stepping onto the field.

“Once we saw probably like, I don’t know, four girls tear their ACL out on our turf,” Coleman said.” It became kind of a stigma that everyone was a little nervous about. ‘Oh gosh, who’s gonna be next’ and for a while it was all people could focus on.”

Although artificial turf has greatly improved since its introduction in the 1960s, studies suggest it is still likely to cause more injuries among athletes than its more expensive counterpart: natural grass.

A 2019 study by Cleveland-based University Hospitals featured data from 26 high school trainers during the 2017-2018 athletic season who reported 953 injuries: 368 were on natural grass, while 585 were on synthetic turf.

The study also found that upper and lower extremities as well as torso injuries occurred more on synthetic turf than natural grass. The sports most vulnerable to the injuries? Football, men’s lacrosse, rugby and girls and boys soccer led the way. 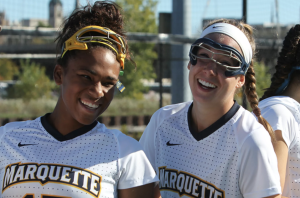 Studies at the collegiate level also raise concerns. Division I athletes who competed on artificial turf experienced injuries to Posterior Cruciate Ligament – which is at the back of the knee and connects the femur to the tibia – at nearly three times the rate of those competing on natural grass, according to a report in the American Journal of Sports Medicine that looked at more than three million athletes from 2004-14.

In 1966, AstroTurf was introduced to sports. It was installed in the Houston Astrodome and changed the landscape of professional, college and high school competition. Now there are roughly 12,000 synthetic turf fields in the United States, reports the Synthetic Turf Council, with between 1,200 to 1,300 turf fields being installed every year.

Rebecca Lambert, a Grand Canyon athletic trainer as well as a personal trainer, said she has not seen a big difference in injury rate when comparing the newer grade of turf versus natural grass. But, she said, when an athlete plants his or her foot on turf it is like glue.

“There’s a higher friction and so when you’re cutting or turning, you just stick to a little bit more whereas natural grass there’s a little more movement in the ground,” Lambert said. “A lot of players complain about feeling more sore or just kind of joints being more achy, kind of worn down after competing on turf versus grass as well.”

Why do so many facilities turn to turf? A big reason is high schools and universities save hundreds of thousands of dollars. A turf field allows multiple sports to play on it without the wear and tear that occurs with natural grass.

Many athletes have mixed feelings about turf versus grass.

Ahwatukee’s Katie Smith, a redshirt freshman playing soccer at Marquette University, competed on natural grass at Desert Vista High School and on turf fields at other schools. She saw injuries occur on both types of fields. But as a center back in soccer, she preferred the natural grass.

“Because it just feels more natural and it’s easier to run on grass and it’s not as hard on your feet as turf and I feel like it just flows better,” she said.

Once she made the transition to Division I soccer, she was practicing on turf and playing games on natural grass. She saw an advantage to that routine. 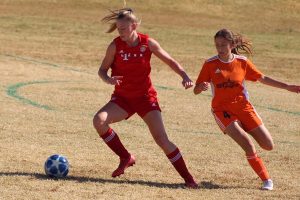 “When you play on turf the games move a lot faster because of the surface, so then the transition from turf to grass helps you play a lot faster and it makes you think a lot quicker off the ball and on as well,” Smith said.

Audra Sumetz, a Desert Vista graduate and soon to be Fort Lewis soccer defensive back, notes she has seen her fair share of hamstring and quadriceps pulls on the turf.

“Because of just the way the turf is, how hard it is and how quickly everything moves,” Sumetz said. “I see more players get injured on turf than natural grass and it gets really hot, so it burns your feet as you’re wearing black cleats.”

The impact of playing on turf is more than just mental, Coleman said.

When she was at Marquette, the strength and conditioning coach approached players that were perceived to more likely to suffer knee injuries and would create programs for them in order to strengthen that area of the knee. But even doing that affected the players mentally.

When playing on the turf it had them “thinking twice about (whether) they’re going to be safe or not,” Coleman said.