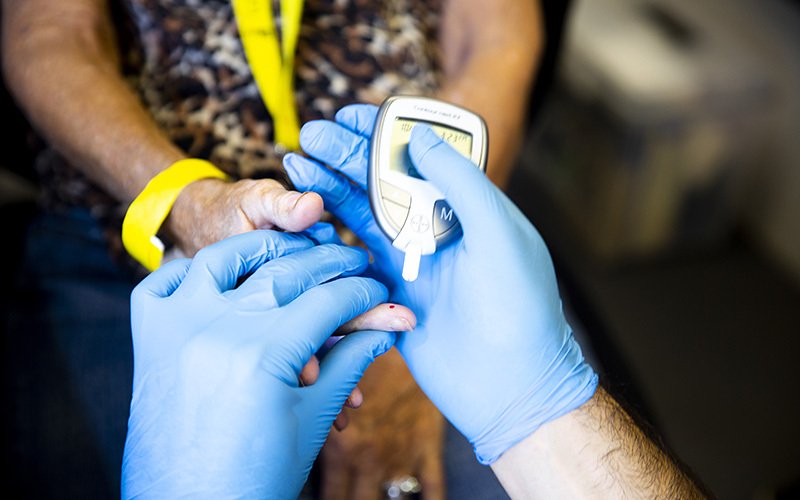 Arizona’s senators are seeking renewal of a program that helps fight diabetes in Indian Country. Native American adults have the highest rates of diabetes in the country, and COVID-19 is more dangerous and deadly for people with the chronic disease. (File photo by Anya Magnuson/Cronkite News)

PHOENIX — Arizona’s U.S. senators are pushing legislation to renew a federal program that fights diabetes in Indian Country – an initiative tribal leaders say is vital amid the COVID-19 pandemic.

“The Special Diabetes Program for Indians is critical in our fight against diabetes and viruses such as COVID-19,” Navajo President Jonathan Nez said in a statement. “If we want our people to be stronger and able to prevent and fight off viruses, then we need our people to eat healthy foods and build their immune system.”

The reauthorization bill – introduced by Sen. Martha McSally, Republican, and co-sponsored by Sen. Kyrsten Sinema, Democrat – seeks to reauthorize the program for five more years and increase funding to $200 million a year from $150 million. The measure is pending in the Senate Indian Affairs Committee.

COVID-19, which is more dangerous and deadly for people with diabetes and other underlying health conditions, has devastated parts of Indian Country. As of Wednesday, the Navajo Nation had 8,370 cases and 405 fatalities.

Native American adults have the highest rates of diabetes in the U.S. and are twice as likely as white adults to have the chronic disease, according to the Centers for Disease Control and Prevention.

Congress in 1997 established the Special Diabetes Program for Indians to provide funding for diabetes prevention and treatment programs. The initiative has received $150 million a year since 2004.

The current five-year authorization expires Nov. 30. The federal CARES Act provided $25 million in partial funding for fiscal year 2021, but without additional action from Congress, the diabetes program will run out of money.

Dr. Ann Bullock, director of the Indian Health Service’s Division of Diabetes Treatment and Prevention, noted the first known decrease in diabetes prevalence among American Indian and Alaska Native adults occurred after implementation of the Special Diabetes Program. She co-authored a study released in April showing that after years of increasing, the percentage of Native American adults with diabetes decreased from 15.4% in 2013 to 14.6% in 2017.

“We are grateful for the continued support from Congress over the past 23 years,” Bullock said in an emailed statement. “This decrease in diabetes prevalence is especially good news, in light of the fact that people with diabetes who are infected with the coronavirus are more likely to develop severe coronavirus disease and complications.”

In a news release about the proposed reauthorization, Gov. Stephen Roe Lewis of the Gila River Indian Community emphasized that the diabetes program is the most effective federal aid available to stop the spread of diabetes and increase the well-being of Native Americans.

“Our journey towards wellness and a healthy way of life will take the continuing support of our federal partners,” Damon said.

McSally said the program “has proved to be successful in curbing the rate of diabetes in Native communities and ensuring Native Americans have access to the care they need in order to stay healthy.”

In support of the reauthorization, Francys Crevier, executive director of the National Council of Urban Indian Health, said it’s imperative that the program be authorized to help families during a pandemic exacerbated by diabetes.

“No one should have to choose between paying for their insulin or paying their rent,” Crevier said.