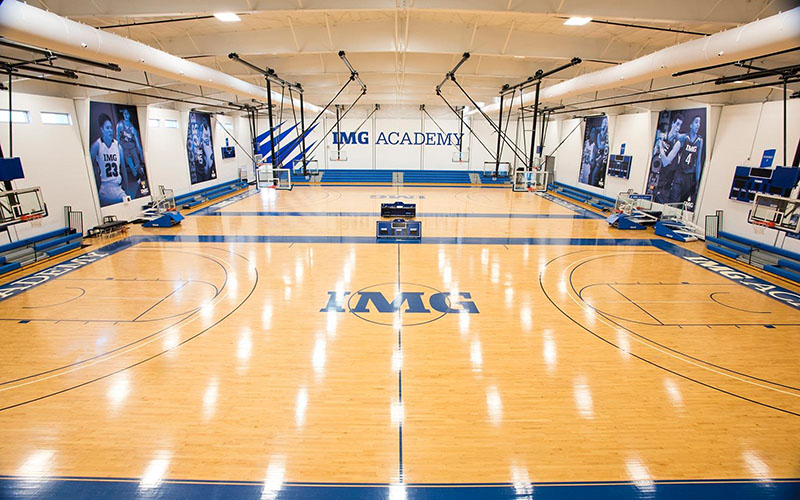 The WNBA is playing its games this season at IMG Academy in Florida, which is a prep school and athletic training facility. (Photo courtesy IMG Academy)

PHOENIX – The Phoenix Mercury have been inside the WNBA’s “bubble” at IMG Academy for about a week now and, despite the chatter from other players on social media, they seem to be adjusting well.

Mercury guard Diana Taurasi sounded excited when asked how life inside the bubble was treating her.

“It’s really like the Olympics meets the World Championship meeting the Final Four,” she said before praising the food and service.

Taurasi has said playing for more than a decade in Russia and Turkey during the WNBA offseason has prepared her for the challenges this presents.

Coach Sandy Brondello also compared life in the bubble to that of championship events.

The bubble concept originated after the WNBA season was suspended due to the COVID-19 pandemic. The idea, similar to what the NBA is doing, is to have the entire league inside a predetermined area and quarantine from the rest of the world.

IMG Academy is a preparatory boarding school with multiple sports training facilities in Bradenton, Florida. Despite being in a state with one of the worst COVID-19 outbreaks, the WNBA has faced minimal issues in keeping its bubble secure so far, league officials said.

Taurasi’s excitement came as a surprise as social media has shown a much worse version of the WNBA’s bubble.

Pictures of questionable-looking food choices have made the rounds on Twitter. ESPN Digital Video Producer Kayla Johnson shared video from inside The Lodge, a residence at IMG Academy, and posted it to her Twitter feed.

just got this video from one of the laundry rooms inside the WNBA “bubble” and couldn’t be more disturbed. this is not ok. pic.twitter.com/6FC10jlcql

Diamond DeShields of the Chicago Sky said she was having an issue getting vegetarian meals delivered to her room.

The Mercury’s Brittney Griner, however, seemed to share Taurasi’s sentiments. Although there have been issues, she said, “Things are getting fixed.” She hinted that she’s needed improvements made to her own situation as well, but wouldn’t disclose what.

The WNBA has done a great job ensuring needs were being met, Griner said.

She thanked IMG for “giving us a place to hoop.”

The bonus of life in the WNBA bubble for many is the lack of travel. Griner said “there’s no 14-, even 16-day road trip to the East Coast just to play in L.A. two days later.”

The benefits from the lack of travel and easier access to trainers, also mentioned by Griner, are going to make this season a lot easier on the body than previous years.

Bria Hartley, signed by the Mercury this past offseason, appreciates the bubble but said she wasn’t crazy about it. Hartley is raising a 3-year-old son and said that she would have chosen against playing, but needed to be paid to support him.

“I’m not exactly thrilled to be in the bubble, but I’m doing what I need to do to provide for my family.”

Although the NBA’s bubble is not allowing family members in until after the first round of the playoffs, Hartley’s son is actually with her inside the bubble. Hartley recently spent three months overseas in a separate league, so she refused to participate this season unless her son joined her.
“He’s just happy to go play in the pool and stuff,” Hartley said.

With life inside the bubble proving to be a significant adjustment for the players, the Mercury were excited to talk about basketball.

The trio of Taurasi, Griner and newly acquired Skylar Diggins-Smith is expected to be one of the best in the league.

The WNBA’s bubble season will begin Saturday, July 25. The Mercury and their new big three will play in the second game of the season against the Los Angeles Sparks.