A worker monitors some of the hundreds of surveillance cameras that the Arizona Department of Transportation has installed in Phoenix and Tucson, allowing it to respond quickly to problems. A new report says Arizona had the highest rate of fatalies on its interstate highways in 2018. (Photo by Jéssica Alvarado Gámez/Cronkite News)

WASHINGTON – Arizona’s interstate highways are in generally good shape, but they experienced the highest rate of fatalities in the nation in 2018, according to a national report released Tuesday.

The report by The Road Information Program said that Arizona recorded 1.09 highway deaths per 100 million vehicle miles traveled on the state’s interstate highways in 2018, almost twice the national average of 0.58 deaths that year.

Authors of the TRIP report – titled “Restoring the Interstate Highway System” – used it as a call for more funding to rebuild and modernize the nation’s 64-year-old interstate system, claiming that deteriorating roads pose a threat to commerce and to safety.

“Deteriorating conditions and fatality rate are because of poor funding,” said Carolyn Bonifas Kelly, director of communications and research at TRIP.

But public and private officials in Arizona said it’s not the roads that are the issue, it’s driver behaviors.

“The problem is many acknowledge that it’s wrong and dangerous and they do it anyway,” said Aldo Vazquez, a spokesman for AAA Arizona. “People need to be aware of the consequences of dangerous driving and change course to prevent tragedy.”

Research from the AAA Foundation for Traffic Safety showed that drivers who have been in at least one crash in the past two years are significantly more likely to engage in risky behaviors like speeding or texting, even when they think the police may catch them.

The Arizona Department of Transportation pointed to its 2019 Arizona Motor Vehicle Crash Facts report, released two weeks ago, which showed traffic fatalities on all Arizona roads reached a three-year low in 2019. In a statement, ADOT also singled out risky behaviors in many of those crashes. 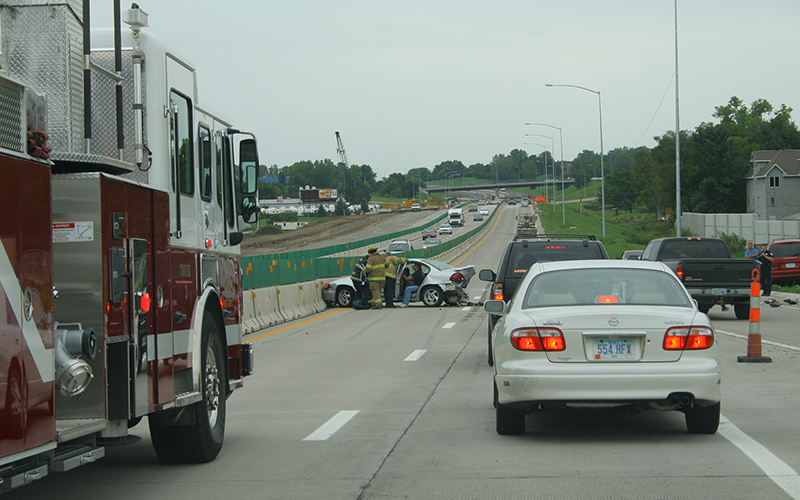 A new study says that interstate highway in Arizona are in relatively good shape compared to the rest of the nation, but the state had the highest fatality rate among states in 2018. State officials say risky driver behaviors are likely to blame. (Photo by Douglas Porter/Creative Commons)

“These are preventable deaths and everyone needs to make better decisions behind the wheel,” the statement said.

Kelly did not comment on Arizona specifically, but pointed to National Highway Traffic Safety Administration research that shows the roadways themselves contribute to one-third of all crashes nationwide.

The TRIP report said interstate highways are among the safest roads in the nation, and estimated that as many as 113 lives may have been saved in Arizona in 2018 because of safety features built into the interstates. But Rocky Moretti, TRIP’s director of policy and research, said states still need to continue to make road safety improvements to the roads.

“We have an aging interstate system, routine repairs are not adequate,” Moretti said.

That may not be easy: Moretti pointed to significant reduction in transportation revenue because of COVID-19, with TRIP estimating that $50 billion in highway funds will be lost nationwide over the next 18 months.

The TRIP report said that travel on Arizona’s interstates grew 15% from 2000 to 2018 and that 12% of interstate travel in Arizona is by combination trucks. That makes keeping interstates up to par all the more important, with the introduction this month of the U.S.-Mexico-Canada trade agreement, said Arizona Chamber of Commerce President Glenn Hamer.

“The Arizona Chamber of Commerce & Industry believes that U.S. highway infrastructure must be modernized to support freight mobility and what we anticipate will be increased cargo volumes, especially in border states like ours,” Hamer said in a statement with the report.