Washington owner Dan Snyder has been outspoken in the past about wanting to keep the nickname of his NFL team. Many prominent voices in the Native American community have pushed for change. (Photo by John McDonnell/The Washington Post via Getty Images)

PHOENIX – Amid pressure from sponsors including Nike and FedEx, Washington’s NFL team is undergoing discussions to change its name, a move some prominent voices in the Arizona Native American community feel is long overdue.

“A lot of Native American people do not want to be looked at as a sidekick, a caricature or a stereotype,” said Douglas Miles, an artist, activist and member of the Apache tribe. “This is all we’ve been given; it is all we have. Unfortunately, there’s this kind of ‘strain.’ We’ve just been conditioned to accept it. Even now, it’s still an uphill battle.”

Although the NFL franchise has held the name since 1933, it is one that does not belong in sports, said an associate professor and co-founder of American Indian Studies at Arizona State University.

That problem is not a new one. In courtrooms, the Washington name change conversation is one that has been taking place since 1992. More recently, activists such as Amanda Blackhorse have worked tirelessly to push the issue.

Miles has worked alongside Blackhorse on many occasions. He founded the WHAT TRIBE Project, which was originally an art-focused project to address the stereotypes of Native people within the media. He said he has now had to transition to focus on the lack of representation of Native people in media. 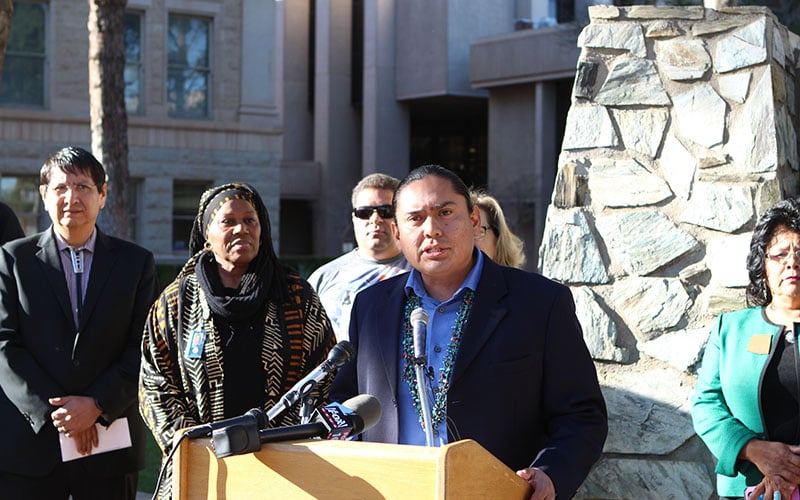 Washington owner Daniel Snyder has been on record on multiple occasions as saying the name is used in an attempt to honor the Native people, but for Miles, that just isn’t a reality. He said the use of the name makes him feel exploited and dehumanized.

“For those in the sports world that don’t know, the premise is that they are honoring Native people,” Miles said. “But the bigger premise for us is nobody asked Native people what they thought, ever. They just saddled us with these racist caricatures and stereotypes throughout history.

‘When I look at it, I see it as a symbol of erasure, exploitation, racism and lack of representation. It symbolizes everything that America wants to ignore about Native people.”

Though this movement has been a conversation for nearly 30 years, the majority of people who speak out in support of the move are Native. For that, Riding In points to the education system. He said the real history between early American settlers and Natives is often glossed over.

“What are people being taught in schools today?” Riding In said. “If anyone had basic, 101 knowledge of American Indian issues, they would know that the term ‘redskin’ is synonymous with savage, red devil and all these other derogatory names that were applied to Indians based on concepts that were rooted in European expansionism coming to the Americas and needing to create stereotypes and justifications for the killing of Indian people and the taking of Indian land.”

In 2013, Snyder was also quoted as saying he would “never” change the name of the team. Only now has he gone back on his initial statement. For Riding In, big-money sponsors stepping is the only way this movement has a shot at gaining traction.

“I think it is a great step forward and maybe the only solution,” Riding In said. “Nike has had some problems in the past with its advertising, but people learn, and Indians will tell them what is wrong with it. It has taken a while, but I think it is a great move. To hurt the team economically will make Snyder listen.”

For Miles, giving credit to Washington’s sponsors for the potential change is bittersweet. He feels as though the Black Lives Matter movement has shed light on “blatant systemic racism in all corners of corporate America.” 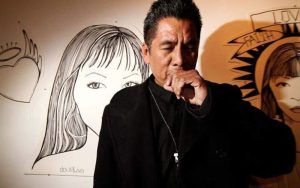 Native American activist and artist Douglas Miles said his community does not want “to be looked at as a sidekick, a caricature or a stereotype.” (Photo courtesy Douglas Miles)

Doing the right thing is something he feels should not be applauded.

Just changing the name and getting rid of the logo is not enough, said Scott Brooks, director and researcher at the Global Sport Institute.

“For me, if we’re really trying to be transformative, while that is great, you know they’ve had to deal with this for decades,” Brooks said. “Are there ways in which we can change, we can address power? Are there ways in which natives can be in positions of power, and there can be greater representation within the organization of the Washington Football Club? Just getting rid of the mascot is one thing, but it doesn’t change all the harm that has been, and it definitely doesn’t really shuffle power.”

“They have their own opinion on what that means to them,” Miles said. “They have a right to their sovereign point of view or their opinion. From tribe to tribe, I think tribes have to respect other tribes’ point of view and opinion. And while I do respect their opinion, I do not agree with using that type of mascot imagery.”

President Trump chimed in on Twitter saying: “They name teams out of STRENGTH, not weakness, but now the Washington Redskins and Cleveland Indians, two fabled sports franchises, look like they are going to be changing their names in order to be politically correct. Indians, like Elizabeth Warren, must be very angry right now!”

Again, Riding in points towards schools. While he feels the president is well within his rights to speak on the subject, he finds the president’s agenda to be “very anti-Indian.” He thinks the name change would present an opportunity for a change in schooling.

“If the changing of the name hurts the feelings of some of these people, I could care less, they deserve to be hurt,” Riding In said. “But for the innocent victims of these so-called ‘honoring events,’ you can fill in the blank. We need change. Maybe this would help bring a curriculum change or we could get the true history presented so that these ignorant people, including the president, will not come up with these asinine statements.”

In his experience, countless examples have been brought to his attention of children being bullied due to their Native heritage. He hopes the name change will put a stop to it.

“It hurts self-esteem of Indian students,” Riding In said. “Many of us were subjected to name calling when we were playing sports against these non-Indian teams. They don’t have an understanding of how (those names) came about and how they are still problematic today.”

For many including Miles and Riding In, when this move comes to fruition, it will have been long overdue.

“I always knew what was really at stake for these brands and corporations,” Miles said. “The simple fact that they are making billions of dollars off of Native American appropriated imagery and Native American people saw zero cents from many of this appropriation… it’s just kind of this horrendous never-ending series of exploitation when it comes to Native American cultural property.”

“Why does it take so many years for change to come?” Riding In said. “These issues should have been resolved a long time ago. Especially in a country that prides itself for honoring human rights, human dignity and justice for all.”