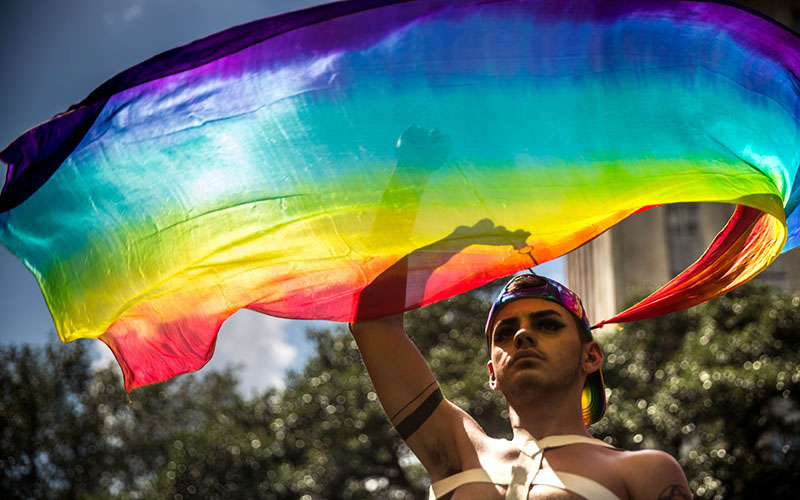 Austin Muckelroy celebrates at the 2018 Houston Pride Parade. Experts worry about the impact of COVID-19 on LGBTQ youth, who suffer disproportionately from behavioral health problems. (File photo by Shelby Knowles/News21) 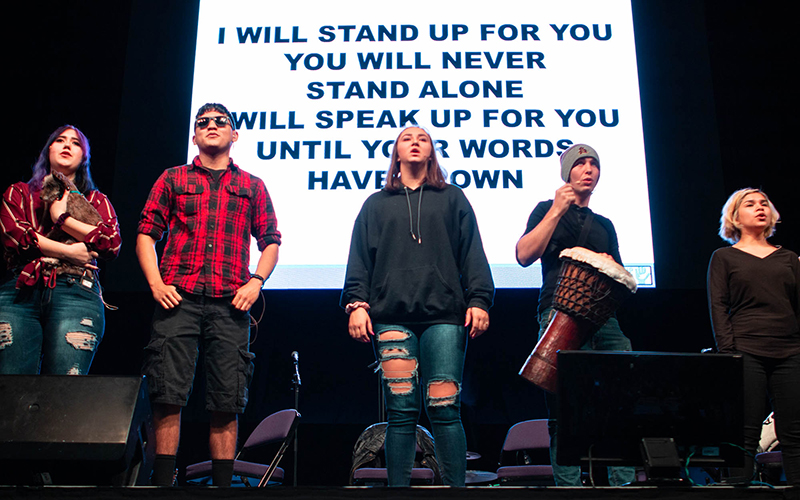 High school students perform at the Speak Up, Stand Up, Save a Life conference in January at Grand Canyon University. The musical aims to get young people talking about mental health struggles. (File photo by Delia Johnson/Cronkite News)

PHOENIX – The isolating effects of business shutdowns and stay-home orders may be taking an especially high toll on an already vulnerable demographic – LGBTQ youth, who suffer disproportionately from behavioral health problems because of discrimination, harassment or lack of emotional support.

For these teens, social distancing could worsen such mental health conditions as depression and anxiety – especially if they are confined to abusive environments, according to a report from The Trevor Project, a suicide prevention and crisis intervention organization for LGBTQ youth.

Fewer positive interactions with peers and allies at now-shuttered schools have exacerbated the situation.

“A lot of it depends on the family makeup,” said Mary Vucurevich, a counselor in Phoenix. “So if they have parents or siblings that are not supportive, it’s been much more difficult … because they don’t get a break or get away from it.”

Economic strain brought on by COVID-19 is another factor affecting the well-being of LGBTQ youth and adults, experts noted.

More than 5 million LGBTQ individuals work in restaurants or food service, education, retail, hospitals and other jobs hit hard by forced closures and quarantines, or otherwise affected by the virus, according to the Human Rights Campaign Foundation.

Aron Castillio is the health justice coordinator at Phoenix’s Trans Queer Pueblo, a group that serves LGBTQ people of color, many of whom have been affected by COVID-19 related closures.

“We were on the front line working,” Castillo said. “We’re the cooks, the housekeepers, and we keep the economy going. So a lot of our jobs were shut down due to the pandemic.”

Many of those served by the group are immigrants, who face additional challenges accessing unemployment and health benefits.

Trans Queer Pueblo has raised $60,000 for its Radical Relief Fund, which supports members with whatever emergency relief they may need. The organization also holds weekly virtual healing circles.

According to the American Psychiatric Association, LGBTQ individuals are more than twice as likely as heterosexual men and women to have a mental health disorder in their lifetime, and two and a half times more likely to experience depression, anxiety and substance misuse.

For lesbian, gay and bisexual youth, the rate of suicide attempts is four times greater than their heterosexual counterparts. It’s two times greater for youth questioning their sexual identity.

Because youth are so tech-savvy and online oriented, Vucurevich said, some have been able to find consolation through online platforms and support groups.

“I encourage them to say, ‘When in the last couple of weeks did you notice that you felt happy? What were you doing?’ I try to just problem-solve together on what they could bring into their everyday existence,” Vucurevich said.

Find more resources at The Trevor Project here. And if you or someone you know is experiencing suicidal thoughts, help is available. In Arizona, call or text 602-248-TEEN (8336). You can also call the National Suicide Prevention Lifeline at 1-800-273-TALK (8255).