Body camera footage shows Phoenix Police officers converging on a car after shooting a man who they said was wielding a handgun and who refused to put it down during a July 4 incident. Advocates are demanding to see more of the video footage. (Image courtesy Phoenix Police Department) 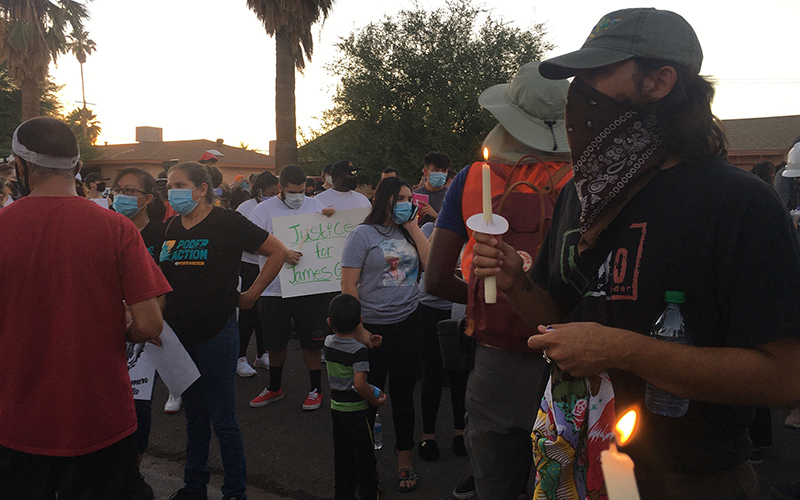 Protesters gathered for a vigil Monday night at the scene in Marvvale where James “Jay” Garcia was fatally shot by Phoenix police on Saturday. A police spokeswoman said it could take weeks before all body-camera video from the event is released. (Photo courtesy Alissa Gomez)

PHOENIX – Phoenix police released partial video Monday of the fatal shooting by officers this weekend of a man in Maryvale, but that did little to satisfy activists who are pressing for more footage to be released to the public.

“We want the full video to be released. Every single video. There were multiple police officers there,” said Viri Hernandez, executive director of Poder in Action, which organized a vigil Monday night. “We want the 911 call in its entirety because we want the family to be able to see that before it’s released to the media.”

Police said Monday afternoon that they were releasing what they could related to the “high-interest case” but that releasing too much now – including video from body cameras worn by the officers who opened fire – “could compromise the investigation.”

In a statement Monday, the department said officers were responding to a 911 call Saturday afternoon from a man who said he had been stabbed the previous week by a man who was back in the neighborhood with a knife and threatening him again. When officers arrived, the caller told them there was a man with a knife and a man with a gun, and directed them to a driveway near 56th Ave and Glenrosa.

Police said they found a man – who has been identified by advocates as James “Jay” Garcia – sitting in a parked car in the driveway. Officers surrounded the car and talked to the man for “approximately 10 minutes” asking him to get out, according to the statement, but he refused, rolling up his windows instead and displaying a handgun.

Officers ordered the man to drop the gun, but he refused, said Sgt. Mercedes Fortune, a police spokesperson. She said the man repeatedly told officers to shoot him, and when he pointed it in their direction through the window, they opened fire.

Amateur video taken at the scene shows officers with guns drawn surrounding a car and shouting commands at a man in the driver’s seat before what sounds like a series of gunshots.

“It’s Arizona, you can carry a gun. That is not a reason to kill someone,” Hernandez said.

Along with the written statement, Phoenix police released audio of the 911 call that started the incident as well as body-cam video from an officer who approached the car after the shooting. That footage only shows officers standing around the vehicle shortly after shots were fired, followed by the officer with the body-camera reaching through the shattered window of the car to retrieve a handgun from inside.

“Investigators are in the process of collecting evidence and completing interviews of everyone who was involved in this critical incident,” Fortune. “A determination as to whether the actions of the officers are within policy will not be made until the investigation is complete and all the facts are known.”

Phoenix police did not give a timetable for the ongoing investigation, but said all body-worn footage from the incident will be released “in the coming weeks” and that the case will be turned over to the county attorney’s office for review once the investigation is complete.

Protesters marched through the area Sunday in response to the shooting, and Poder in Action organized a vigil and march Monday evening. That march was scheduled to start at the organization’s office near Maryvale at 6 p.m. and end at the scene of the shooting. Marchers were encouraged to bring candles, flowers and wear a mask.