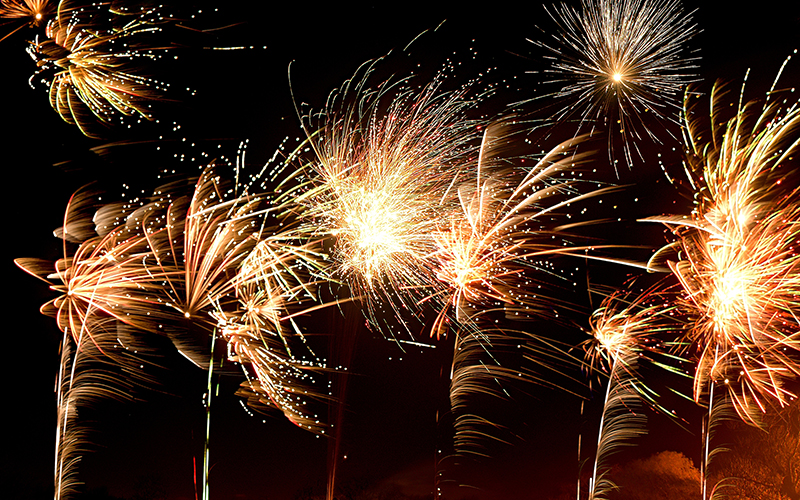 Fireworks displays can still be found in Arizona this Fourth of July, but some localities have canceled their displays in the face of COVID-19 and new restrictions on public gatherings. Others are limiting displays to drive-through events, calling for social distancing or moving celebrations online. (Photo by hammarbytp/Creative Commons)

PHOENIX – In many Arizona towns, this Fourth will be a first.

But Fourth of July event organizers like Judy Aldrich are still looking forward to community Independence Day celebrations that they insist will go on despite the COVID-19 pandemic.

Aldrich is in charge of Tempe’s Celebration of Sparklers, which has handed out thousands of sparkler packets to Tempe residents after the town canceled the Tempe Town Lake Firework Show that is sponsored every year by the Kiwanis Club.

“I’m hoping that at 9 we have people come out of their homes, stay safe, light their little sparklers, get kind of a little levity for five minutes and see their neighbors,” Aldrich said. “That’s really what it is about – it’s a community thing. And Tempe is a close community.”

Sparkler night is just one of the many alternate celebrations that towns across Arizona have planned to take the place of traditional Independence Day festivals and firework shows this year, as the state grapples with skyrocketing numbers of COVID-19 cases.

And at least one town is sticking to a masks-free, small-town parade tradition.

Eagar Mayor Bryce Hamblin said in a statement last week that people are welcome to wear masks to the town’s “United We Stand as Proud Americans” parade, but he’s not about to require it.

“When did we stop being the land of the free and the home of the brave?” Hamblin asked in his statement. “Take charge of your own life. Nobody owes you anything…. This is America! Stand up and be somebody! Be brave and live free.”

But Eagar appears to be an outlier among local governments, many of whom are trying to balance celebration with safety.

In Lake Havasu City, where wide-open Memorial Day events were sharply criticized by health officials, the town is going ahead with a shortened fireworks display – but asking residents and visitors to practice social distancing while watching the show.

“Us and the city are encouraging everyone to social distance and to wear masks whenever they are around other people,” said Go Lake Havasu CEO Terence Concannon. “Some of the visitors who come to town don’t feel like exercising the same caution as we do here in Havasu.”

In addition to Tempe, Phoenix, Flagstaff, Goodyear, Gilbert and Buckeye have all announced that their fireworks are canceled this year.

Mesa, Yuma, Prescott and Surprise have all said they plan to move forward with fireworks shows, with various levels to restrictions, from encouraging people to watch from home or from their cars.

Peoria will have fireworks – but only on the small screen, with video of previous years’ shows posted online. It’s part of the city’s “All-American Festival at Home,” which aims to make festivities “accessible from computer screens, mobile devices and TVs.” Besides barbecuing tips and craft sessions, the all-day event promises a cannonball contest, ice cream tasting, concerts and clips of past fireworks displays.

Tucson is not canceling its fireworks display, just postponing them to a later date while the city fights to keep the coronavirus in check. Tucson City Manager Michael Ortega said in a statement last week that postponing the annual “‘A’ Mountain Fireworks” is the “right decision to ensure that we stay on track, slowing the spread and for our planned re-opening.”

“It is our intent to hold the event sometime in the future, when we can all safely come together, to celebrate coming out of this time of crisis and our return to a new normal for our community,” Ortega’s statement said.

The changes come as the state’s largest counties have imposed mask requirements for people in public and as Gov. Doug Ducey has reimposed restrictions on businesses and public gatherings in the face of soaring COVID-19 infection rates. Ducey’s order was specifically cited by Gilbert officials when they announced that their fireworks would be canceled.

But Concannon said Lake Havasu City, like other towns, is aiming to celebrate the Fourth of July, but to do so safely.

“We love having our visitors in Havasu, but the COVID rates in Lake Havasu, and Mohave County, are spiking right now,” he said. “We just don’t encourage, we ask and request that everyone wear a mask when they’re out and also that they practice social distance because we all live in a society and we want that society to be as healthy as possible.”