By Deagan Urbatsch and Jacqueline Robledo/Cronkite News
The Native Wellness Institute is among groups working to address the mental and emotional health of Native Americans as COVID-19 ravages Indian Country. (Video by Frankie McLister)

PHOENIX – With COVID-19 taking an especially heavy toll on Native Americans, tribal leaders and mental health experts have stepped up efforts to address the emotional suffering brought on by ongoing lockdowns and so much loss.

“Please stay connected with relatives and neighbors by phone or video chat and remind them that they have support,” Navajo Nation Vice President Myron Lizer said recently, imploring Navajos to take care of their mental well-being as well as their physical health.

“If you are feeling stress or anxious, take the time to take a deep breath, stretch, or pray,” he said. “Exercise by working out or by doing household chores and avoid unhealthy foods and drinks. We must protect ourselves and others.”

More than 320 COVID-19 deaths have been reported on the vast Navajo Reservation, which lies mostly in Arizona but also covers parts of western New Mexico and southern Utah.

The tribe has the highest per capita rate of cases in the country: 6,747, as of Wednesday, among the 173,000 people who live on the reservation. That rate tops hard-hit New York and New Jersey, according to data collected by the Johns Hopkins University Center for Systems Science and Engineering. 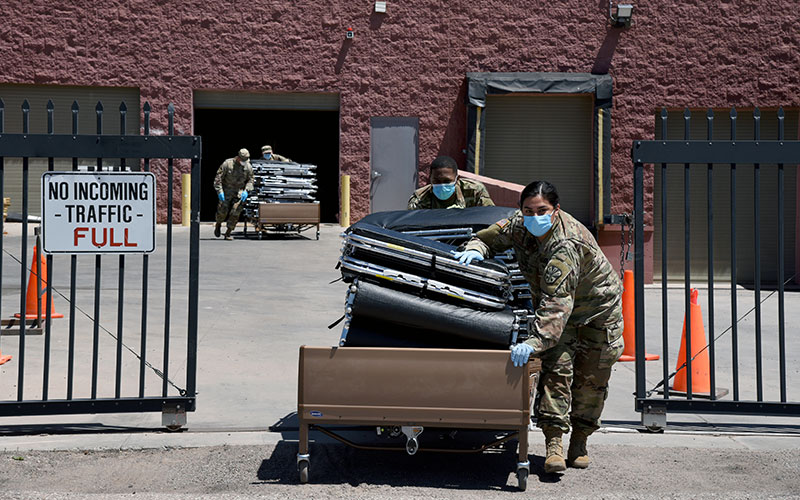 Earlier this week, in response to an increase in COVID-19 cases in areas near the reservation, the Navajo Nation reinstituted a 57-hour weekend curfew beginning at 8 p.m. Friday and running until 5 a.m. Monday. The order includes a second lockdown from June 26 through June 29.

Overall, according to the Indian Health Service, more than 15,000 cases of COVID-19 have been reported among U.S. tribal communities, whose residents tend to have more underlying health problems and less access to clean water and good medical care.

American Indians and Alaska Natives also suffer from higher rates of mental and behavioral health problems, and experts worry that social isolation and other effects of the pandemic could increase psychological distress or prevent those suffering from addiction from receiving life-saving medication.

The Native Wellness Institute, based in Oregon, is among the groups responding to these concerns. On April 25, it launched an online Power Hour to bring healing and wellness to Native Americans through programs that embody the teachings and traditions of their ancestors.

The daily Power Hour takes place at noon Pacific time via Facebook Live, and sessions have included lessons on self-care, resiliency and activism.

Among those presenting have been Native storyteller Gene Tagaban, who is Cherokee, Tlingit and Filipino; wellness trainer Theda New Breast, a member of the Blackfeet Nation; and motivational speaker and comedian Kasey Nicholson of the Fort Belknap Indian Community. A recent session focused on the Black Lives Matter movement – a livestream that garnered more than 7,000 views.

“We knew that an already traumatized people were going to be retraumatized, so we wanted to create that safe and brave space to best give what we knew we had,” project coordinator Shalene Joseph said. “We have a ton of trainers and people reaching out saying, ‘I have something to say.'”

“This means that during this unprecedented period of social distancing, we have to identify ways of connecting with others to garner and give support without being in their physical presence,” write LePlante and Shaffer, both professors of psychiatry at Harvard Medical School.

According to federal reports, psychological distress among American Indians and Alaska Natives is 1.5 times higher than among the general population, and significant mental health concerns include substance use disorder, suicide, anxiety and post-traumatic stress disorder. Native Americans also have the highest suicide rates in the country, according to the Centers for Disease Control and Prevention.

LorenAshley Buford of Arizona heads the Healing Indigenous Lives Initiative, which has been holding online meetings to provide support to those in need during the pandemic.

Buford asked young people who experienced these issues to become peer guides for others by sharing their techniques for self-love.

During one recent virtual meeting, peer guide Santana Bartholomew talked about living through the lockdown in the Pueblo of Pojoaque in New Mexico.

“Anyone who knows me well probably knows that I’m going a little bit insane, because I’m used to being super busy,” she said. 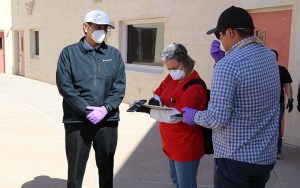 The topic of the meeting was Culture as Prevention, which Bartholomew said is at the heart of how Native Americans live their lives.

“Culture is made up of our customs, traditions, values system. … My culture means still getting to bed at a decent time even though I don’t have to be up early, waking up at a decent time, reading some scripture,” Bartholomew said.

She described getting up with her son, making him breakfast, keeping the house clean and always getting in a workout – all to prevent the feelings of hopelessness and loneliness that accompany extended periods of isolation.

“There’s a lot of fear going around, but looking at the positives of the situation is the way to go,” Bartholomew said. “Don’t be afraid to reach out. We’re so lucky we have this awesome technology to keep us connected.”

In a webinar held by the National Indian Health Board, Glorinda Segay, a public health project coordinator for the organization, encouraged Native Americans to pursue self-love and forgiveness to combat feelings of hopelessness that may be prevalent as the pandemic wears on.

“People need to consider being more gentle with themselves through reassurance and prayers,” Segay said, “and forgive themselves for making mistakes while adjusting to ‘the new norm.'”