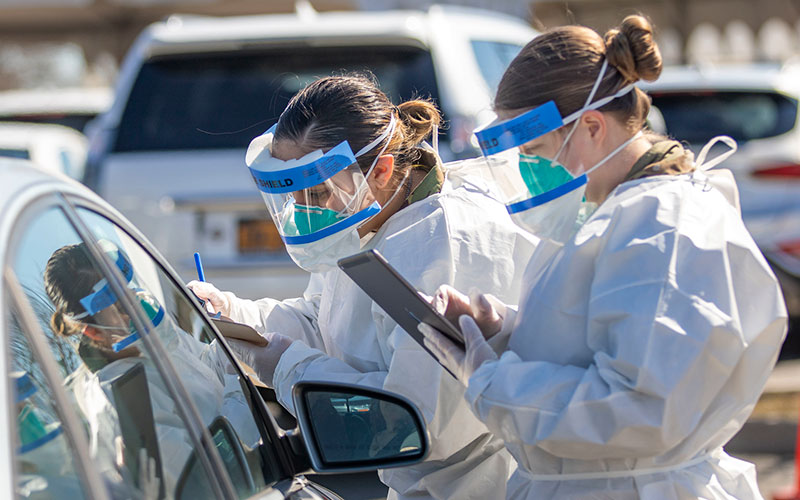 Doctors recommend that anyone experiencing COVID-19 symptoms go to a drive-thru testing station, such as this one in New York in March, rather than to a hospital. (Photo by The National Gaurd/Flickr Creative Commons)

PHOENIX – Confirmed COVID-19 cases in Arizona rose by nearly 2,400 on Monday alone, breaking Friday’s record of 1,600 by almost 50%, according to data from the Arizona Department of Health Services.

The spike in positive cases comes several weeks after the May 15 lifting of Arizona’s stay-at-home orders, when businesses began reopening, and Memorial Day weekend, when many Arizonans left their homes to celebrate.

“It would be preposterous to think that people going out aren’t increasing the positive cases,” Dr. Murtaza Akhter of the University of Arizona College of Medicine told Cronkite News on Tuesday. “One of my concerns is whether people are ever going to take public health emergencies seriously.”

He is among the national experts who are raising an alarm about the rising number of cases in Arizona and a handful of other states, but Akhter’s worry is that these “huge jumps” in recent statistics suggest that positive cases haven’t yet reached their peak.

“The cases will continue to increase,” he said. “And the peak of cases isn’t necessarily the peak of sickness and hospitalizations. You can test positive and still take a week to develop the worst of your symptoms.”

As hospitals face alarming numbers of COVID-19 patients and are “nearing the edge” of being overwhelmed, Akhter advised people with symptoms, such as fever and a dry cough, to visit a drive-thru testing station, or an urgent care provider if they need medicine for their symptoms. Only go to a hospital with severe symptoms or any difficulty breathing to help mitigate the workload of emergency rooms, he urged.

At a news conference Thursday, Gov. Doug Ducey stood firm on his decision to reopen the state and said Arizona is prepared to “expect the worst.”

A federal judge ruled late Monday that the Treasury Department must release $679 million of the $8 billion CARES Act funds allocated to the nation’s indigenous tribes, KTAR reports. The funds were withheld after a Kansas tribe objected to the methodology of the first distribution of $4.8 billion in May. Judge Amit Mehta of U.S. District Court for the District of Columbia ordered the Treasury to distribute the withheld funds by Wednesday.

There have been two multibillion-dollar distributions of CARES Act funds to aid tribes, several of which have reported high case incidences and deaths per capita due to the pandemic. The most recent distribution included an $86 million payment to the hard-hit Navajo Nation, President Jonathan Nez said.

The Navajo County Sheriff’s Office released a statement on Facebook that there are confirmed cases within the county jail in Holbrook, where more than 250 inmates are held, but it did not say how many. County officials said they are “aggressively responding” to the novel coronavirus that causes COVID-19, which can spread rapidly in the close quarters of detention centers, with increased cleaning and screening processes.

Gov. Doug Ducey withheld $395 million in CARES Act funds from 88 small cities and less populous counties in Arizona, according to an investigation by The Arizona Republic. Meanwhile, Phoenix, Mesa and Tucson received an average of $59 more per capita than such smaller communities as Lake Havasu City.

President Jonathan Nez announced in a Facebook town hall Tuesday that the tribe will reinstate the 57-hour weekend curfew in response to the skyrocketing number of positive cases in Arizona and on the reservation. It has been several weeks since the curfew was in effect.

“Tourists, please do not come through the Navajo (lands). Now is not the time to be traveling. Please stay home,” Nez said. The sweeping reservation touches New Mexico, Utah and Arizona and is flanked by scenic national forests and parks, including the Grand Canyon.

The Arizona Department of Economic Security is facing 57 potential fraudulent claims involving its Pandemic Unemployment Assistance Program, AZfamily reported. The Office of Inspector General for the Department of Labor sent out alerts Tuesday warning users about phishing scams. More than 3.7 million Arizonans have applied for benefits under the program since March 29, the state reports.

Since Monday, Arizona State athletes have been returning to campus but only after being tested for COVID-19 and quarantined at least a week. Cronkite News reports the school intends to host voluntary football workouts and quarantine players for seven days if they’ve traveled domestically and 14 days if they’ve traveled internationally. Athletes, like all ASU students, will be required to wear masks when in university facilities beginning in the fall.

The Arizona Community Foundation and a growing list of corporate partners that includes APS and Wells Fargo, have established a fund to support nonprofit organizations battling the impact of COVID-19. Individuals can contribute to the fund here.