Alex Bowman, leading a pack of cars during the Coca-Cola 600 at Charlotte Motor Speedway recently, said he supports NASCAR’s decision to ban Confederate flags. The Tucson resident says there’s “no reason to have anything that makes anybody uncomfortable.” (Photo by Jared C. Tilton/Getty Images)

“There’s no reason to have anything that makes anybody uncomfortable to come to a NASCAR race,” Bowman said. “I think it’s a family event. We wanna put on a great show and include everybody.”

Confederate flags have long been a common sight at NASCAR races and pre-event tailgates. Phoenix Raceway is the stop for several NASCAR events, including November’s Cup Series Championship.

The organization’s sudden decision came two days after NASCAR driver Bubba Wallace, who is Black, spoke to CNN and called for the removal of Confederate flags from competition.

NASCAR, founded in Florida more than 70 years ago in 1948, has a following that is deeply rooted in the South. According to a 2011 demographics survey, 40% of NASCAR fans live in the South, the highest for any region.

And NASCAR’s fan base has long been predominantly White. The same survey estimated that just 8% of NASCAR fans are Black, and only 20% are minorities, a figure NASCAR confirmed in a 2019 study.

A representative from Phoenix Raceway declined to comment but left a statement identical to the one made by NASCAR on Twitter.

“The presence of the confederate flag at NASCAR events runs contrary to our commitment to providing a welcoming and inclusive environment for our fans, our competitors and our industry. Bringing people together around a love for racing and the community that it creates is what makes our fans and sport special. The display of the confederate flag will be prohibited from all NASCAR events and properties.”

Not everyone involved with NASCAR is on board. Ray Ciccarelli, a part-time driver in NASCAR’s Gander RV & Outdoors Truck Series, announced in a Facebook statement posted Wednesday that he was quitting as a result of the Confederate flag ban. 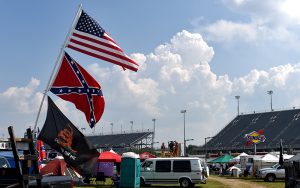 American and Confederate flags fly over the infield during practice at Darlington Raceway in South Carolina. NASCAR announced Wednesday that it’s banning all Confederate flags from its events. (Photo by Jonathan Moore/Getty Images)

“Well it’s been a fun ride and dream come true but if this is the direction (NASCAR) is headed we will not participate after (the) 2020 season is over,” said Cicarelli, who added he didn’t believe in kneeling during the national anthem or taking away someone’s “right to fly” the flag they choose.

Wallace, one of NASCAR’s few Black drivers, has been outspoken about racial injustice, especially in the wake of George Floyd’s death after a Minneapolis police officer kneeled on his neck for nearly nine minutes on May 25. His death has led to protests by thousands in Arizona, across the U.S. and the world.

The 26-year-old wore an “I CAN’T BREATHE” shirt at an event this past week and drove a car painted black and emblazoned with the words Black Lives Matter.

NASCAR is one of the first sports to return this summer after the coronavirus pandemic shuttered events. The next race at the Homestead-Miami Speedway this Sunday will invite 1,000 military members and their families to attend. The June 21 race at Talladega Superspeedway will allow up to 5,000 fans to attend.