PHOENIX – Customs and Border Protection officials spent funds that were supposed to go to medical care and migrant processing facilities to pay for computer upgrades, canine units, ATVs and other items instead, a new government report shows.

The Government Accountability Office said Thursday that CBP violated the law when it took money allocated specifically for “consumables and medical care” and “migrant care and processing facilities” and used it for dirt bikes, boats and janitorial services.

Calls seeking comment from CBP and the Department of Homeland Security were not immediately returned Friday. But critics of the agency called the “spending spree … unacceptable.”

“To be perfectly honest, we were very disturbed, but not surprised,” said Vicky Gaubeca, director of the Southern Border Communities Coalition. “When this funding came up last year, we actually flagged with several congressional offices that we didn’t trust that CBP would use the money for any type of humanitarian assistance.”

The funding was approved last summer in response to a surge of migrants at the southern border. More than 100,000 migrants were stopped each month from March to June, with 81,777 in July when the money was approved. By contrast, the agency took 23,118 migrants into custody last month and 16,966 in April.

The GAO report said that as part of the additional funding to “respond to the significant rise in aliens at the southwest border,” Congress approved two line items: $112 million specifically for “consumables and medical care” and $708 million for “establishing and operating migrant care and processing facilities.”

Some of the money did go to the proper use, the GAO said, pointing to the purchase of defibrillators, masks, gloves, hygiene products, baby supplies and more as items that “clearly relate to ‘medical care.'” Other purchases, such as vehicles, might qualify if they were for medical transport, the GAO said. 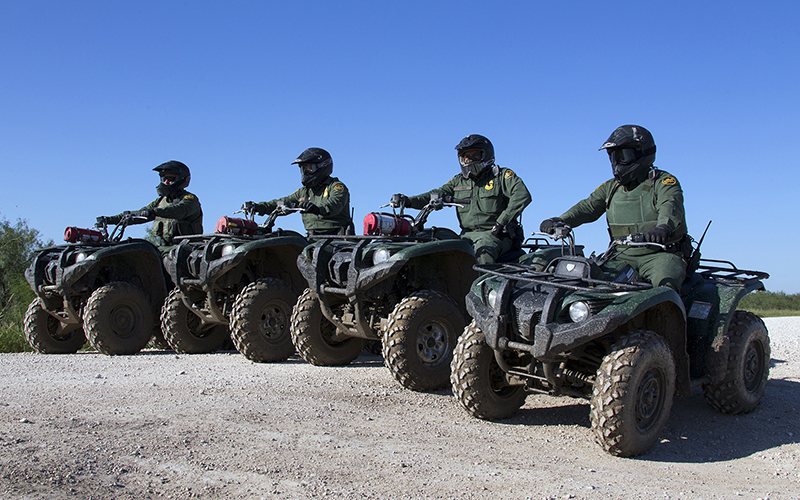 Border Patrol Agents on all-terrain vehicles on the Texas Border in a 2013 file photo. ATVs are among the items CBP bought improperly, a new audit says. (Photo by Donna Burton/U.S. Customs and Border Protection)

But many of the other purchases it found clearly fell outside the intent of the allocation, the GAO decision said. Those included all-terrain vehicles, motorcycles and other vehicles used for routine border patrol activities, support for an agency-wide vaccine program, printers, cameras, speakers and more.

Specific amounts that were misallocated were not available Friday. But in a statement on the decision, which came as part of a larger audit, the GAO said it determined that CBP “violated the purpose statute, which is intended to limit spending of funds to the purposes for which they were appropriated.”

“CBP violated the law when it used these amounts for other purposes that included supplies and services for CBP’s canine program and computer network upgrades supporting CBP’s border operations,” the statement said.

The decision said that CBP acknowledged the issue and “plans to adjust its accounts for several of these obligations.” For any spending that cannot be shifted to the proper budget line, the decision said, the agency has a legal responsibility to report it as a violation of the Antideficiency Act.

Gaubeca’s organization said in a statement Thursday that the CBP spending is “unacceptable” and the agency must be held “accountable for this egregious misuse of funds and for their complete disregard for people or laws.”

“While asylum-seeking women, children and vulnerable populations were suffering in inhumane, deplorable conditions in CBP facilities along the Southern border, CBP officers took congressionally-appropriated relief aid – that I and other colleagues opposed – and went on a shopping spree for themselves,” he said in a statement released by his office.

“I will continue working with my colleagues to stop writing a blank check to these agencies with no accountability or transparency while working towards a border policy that prioritizes the humanity, health, and well-being of those seeking asylum,” he said.