After days of protests against the police-involved deaths of Dion Johnson and George Floyd, demonstrators turned out Wednesday to call on the Phoenix City Council to cut funding for the police department in next year’s budget. (Photo courtesy Poder in Action)

PHOENIX – The Phoenix City Council narrowly rejected a plan Wednesday that would have sharply increased funding for a newly established civilian oversight committee for the police department.

The council voted 5-4 against the proposal to raise funding for the new Office of Accountability and Transparency from $400,000 to $2.9 million, saying it was more important to get the office up and running first and that funds could be added later as needed. The office is still included in the overall budget, which the council is scheduled to take up on Monday.

The vote capped six hours of budget debate that was dominated by speakers demanding that the council cut overall funding for the police department, currently proposed at $721 million for fiscal 2021. That decision was put off until Monday’s budget vote, however.

Wednesday’s hearing came on the heels of days of clashes between police and demonstrators protesting the deaths last week of Dion Johnson in Phoenix and George Floyd in Minneapolis at the hands of police officers.

Because of COVID-19 restrictions, no members of the public were allowed in the council chambers for Wednesday’s hearing, but hundreds of protesters gathered outside and 183 signed up to speak on the budget, calling in their comments for close to four hours of the six-hour meeting. Even though they were kept outside, booming chants of “black lives matter” could be heard inside the council chambers on the streaming video of the hearing.

Witnesses – some of whom were protesters calling from outside Phoenix City Council – urged the council to cut police funding and redirect the money to programs like healthcare, education and housing.

“The proposed budget as it stands is unacceptable and it’s offensive that this is being considered,” said Monique Kelson, one of the protesters stuck outside in 109-degree heat.

“Over $700 million to a police department that continues to break records for shootings and using excessive force, especially in comparison to the near $52 million that is proposed for community development and enrichment collectively,” Kelson said.

It was that record of officer-involved shootings that led the council in February to approve the creation of a civilian oversight committee for the police department, after years of trying and failing to approve such a body.

Phoenix was the largest city in the U.S. without a civilian review board, according to a 2018 report by the National Police Foundation. That same year, Phoenix posted the highest number of officer-involved shootings in the nation, 44, of which 23 were fatal, the report said.

At the outset of Wednesday’s hearing, Councilmember Carlos Garcia proposed the $2.5 million increase in funding for the oversight office – a proposal that an angry Councilmember Sal DiCiccio later blasted as an “attack on police.”

Jacob Martinez, who was outside the hearing with other protesters, said that from from being an attack on police, he believes the newly established oversight committee will be “preventative” and will decrease incidents of police brutality in the city. 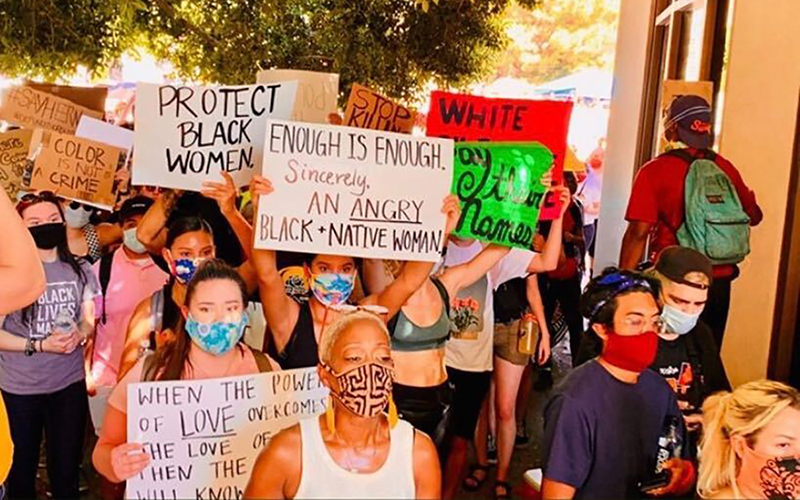 Organizers estimate that hundreds showed up outside Phoenix City Hall Wednesday to urge the city council to cut funding for the police department in next year’s budget. (Photo courtesy Poder in Action)

Martinez, who works as an organizer with NextGen America, said he showed up at the hearing to make sure the city is listening to its constituents, especially during a time of civil unrest across the country. He called on the council members to “make sure that police officers are held to the same standard that we all are.”

The calls were overwhelmingly in support of cutting the police department’s budget by up to 25%. The $721 million proposed for police next year is a 3.3% increase over the current year’s spending. The overall proposed city budget for fiscal 2021 is just over $5 billion.

Michael Blunt, who called in, said he could not understand how the city could justify its spending. “In total appropriations the police department constitutes more than a fifth of funding,” he said.

In an impassioned phone call, Poder in Action Executive Director Viri Hernandez said the mayor and councilmembers had not acknowledged the more than 2,500 people who left budget comments online, or the 600 people standing outside “risking their lives in 109 degree weather.”

But Kelson said she was not surprised that people had to demand reform while standing outside in 109-degree heat with an air-quality index of 105 during a global pandemic.

“The city of Phoenix needs to do better. I’m tired of us making the news with embarrassing headlines,” she said.