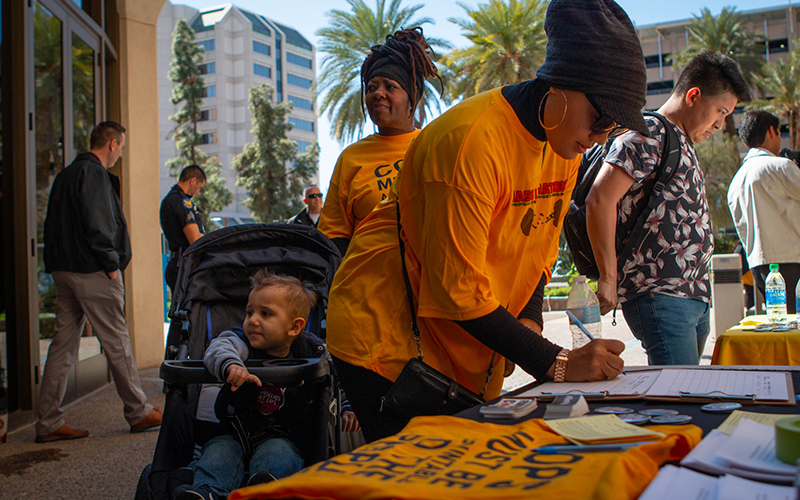 Lola Levesque signs in at a table outside City Hall set up by the advocacy group Poder in Action. “If you leave it in the police hands to investigate themselves, it’s like students grading themselves,” she said. (Photo by Delia Johnson/Cronkite News) 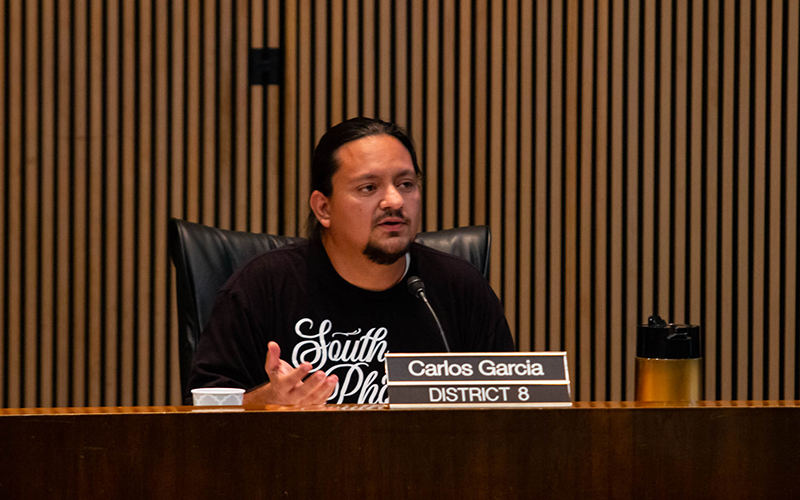 The council approved council member Carlos Garcia proposal to create the Office of Accountability and Transparency to work with a community review board. It will have the power to investigate, recommend policy changes and set up community outreach. (Photo by Delia Johnson/Cronkite News)

Maria Castro, wearing a T-shirt reading “Cops Must Be Accountable to the People,” recounted a personal story that affected her family. “Your officers destroyed our lives,” she told council members. (Photo by Delia Johnson/Cronkite News) 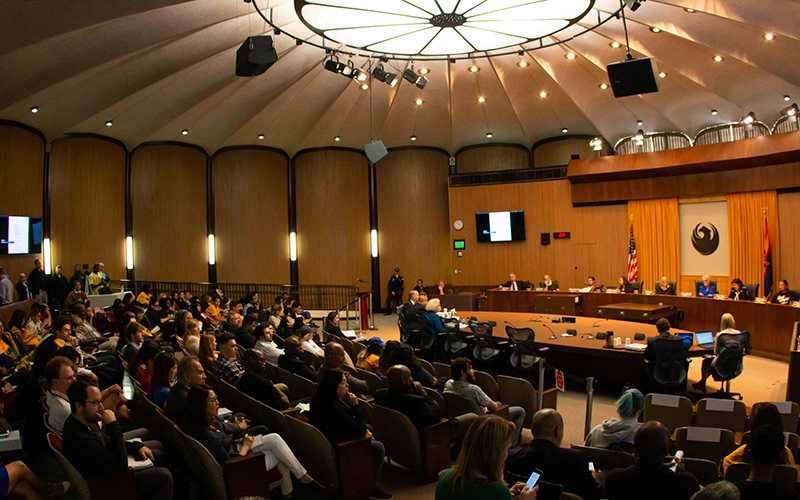 PHOENIX – The City Council on Tuesday approved civilian oversight of the Phoenix police that combines a new city agency and a community review board that will have the power to investigate complaints against police, recommend policy changes directly to the police chief and set up community outreach.

In a historic 5-4 vote, the council backed a proposal from council member Carlos Garcia to create the Office of Accountability and Transparency, comprised of city staff, and a Community Review Board that will recommend changes to the agency and conduct community forums.

The audience erupted into cheers after the results were announced. The decision came nearly five hours into the meeting and months after police-community relations in Phoenix reached a tipping point when a video of one family’s encounter with police went viral.

One after another, members of the public, many wearing yellow T-shirts that read “Cops Must Be Accountable to the People,” urged the council to support civilian oversight that’s independent of the police department, had investigative powers and was transparent to the public.

In the narrow vote, the council rejected a more moderate plan, referred to as Model A, to set up a “community relations board” and hire an ombudsman and staff to mediate complaints and monitor and audit Phoenix police investigations of major incidents.

Mayor Kate Gallego, who originally proposed that plan, switched to support the investigative plan after most of the 50 people who addressed the council said they would only support a system that was community driven and had investigative powers.

Many activists said they know that there are good officers on the police force, but it’s the bad ones who need to be addressed.

Tremikus Muhammad, of the Phoenix Local Organizing Committee for Justice or Else, said Gallego’s proposal showed the community how little she thinks of them.

“It said a lot to us about what you think about us as a people and our justice and our pain,” he said as the crowd cheered. “You’re looking at people who are in pain but you know what the difference is? You haven’t felt the same pain that we feel.”

After he spoke, many of the audience started chanting: “Shut it down!”

Several called Model A “a slap in the face” to community organizations who had spent several months working with city officials on proposals offering transparency.

“The Phoenix Law Enforcement Association cannot support any model that does not show how the entire Phoenix community, which includes Phoenix police officers, benefits,” he told the council.

After the vote, London said he did not see the decision as a loss and hopes PLEA will be involved in the process.

The vote was a victory for Garcia, an activist elected last year on a platform of immigration and police reform. He represents District 8, which covers south and southeast Phoenix.

“This is just the beginning,” a triumphant Garcia told the crowd outside council chambers after the vote.

Phoenix currently has a use-of-force and discipline review board, which consists of residents and was created by the police chief, according to a staff report.

Details about the new agency and review board will remain to be worked out, such as how much it will cost, how the board will choose members, and when it will get started.

The proposal that was rejected would have cost $1.7 million to $1.8 million a year for the ombudsman, staff and other expenses, according to a staff report.

That report also appeared to make the point that Phoenix could afford it, listing the city’s budget at $4.6 billion – about $721 million of which is allocated to the police department. In addition, the report shows, police settlements reached $26 million.

The Office of Accountability and transparency will send its own reports and police documents to community members while working closing with the civilian board, which will review department policy and conduct community forums.

Police advocates have countered that law enforcement officers were too often undervalued and misunderstood for doing a job most people would find difficult to handle.

Council member Sal DiCiccio, a longtime police supporter who voted no, called the plan “the most radical, dangerous and extreme in the whole country” and said it will destroy the morale of the police department and put officers in danger.

Supporters said the plan is not to punish police who are doing their jobs well, but to curb overaggression and bad behavior, and build community trust.

A video of a Phoenix police officer taking a baby from the arms of a mother last summer that drew national attention and apologies from the mayor and chief of police was the tipping point for protests, community and council meetings at which supporters of police reform complained about bad relationships and police abuse that stretched back for years.

In the video, police are seen approaching with guns drawn threatening to shoot the couple after their daughter walked out of a Family Dollar with a doll. Gallego and Police Chief Jeri Williams offered public apologies.

The Phoenix Police Department also has gained public attention for a record-breaking of 44 officer-involved shootings in 2018 – higher than those in Los Angeles and New York.

At council meetings this summer, members backed such reforms as the previously planned rollout of body cameras for the force and regular, internal audits of incidents where police officers used firearms.

Those meetings led to workshops and other staff research into several civilian review board systems, from Chandler and Tucson to Austin, Texas, and Denver.

Chandler has had citizen oversight over its police department since 2000. The city has a panel of 15 residents and six police staff members that reviews all police shootings and incidents when direct physical force by the police results in serious injury or death. The panel acts in an advisory capacity to the chief of police and makes recommendations for training and discipline actions, according to the city.

During a series of city meetings, the members looked at review-focused boards, such as those in San Antonio, Texas, and Charlotte; audit/monitor boards like those in Tucson and Los Angeles, and investigative boards like those in Newark, New Jersey, according to a city staff report.