Visitors at Mather Point in the Grand Canyon in this 2019 photo, taken during the partial government shutdown. The park, which closed April 1, 2020, due to coronavirus is slowly reopening, but some groups worry that the National Park Service is not taking sufficient health precautions. (Photo by Chloe Jones/ Cronkite News)

Navajo Nation President Jonathan Nez told House Democrats that traffic through the Navajo Nation is up sharply since the reopening of the Grand Canyon, even though the tribe has imposed strict curfews and travel lockdowns in an effort to stem the spread of COVID-19. (Photo by Bryan Pietsch/Cronkite News)

PHOENIX – Arizona tribal leaders told House lawmakers Tuesday that moves to reopen national parks are being made without needed health safety measures to protect tribal members or park visitors during the COVID-19 pandemic.

But witnesses at the hearing, held by Democrats on the House Natural Resources Committee, said the Interior Department has unnecessarily rushed the reopening.

“We rely heavily on the tourism industry, but now is not the time to be on the Navajo Nation,” Nez said. The Navajo Nation, one of the hardest-hit areas in the country for COVID-19 infections, reported 98 new cases and five additional deaths Monday, bringing their totals to 5,348 cases and 246 deaths.

An Interior Department spokesman said the agency was not invited to testify to the panel, which did not include any GOP committee members. The event was brushed off by the committee’s ranking Republican, Rep. Rob Bishop, R-Utah, as just “another partisan forum.”

“To argue that our national parks and trails opening up is a threat to American lives is tone deaf at best, and disingenuous fear-mongering at worst,” said a statement from Bishop’s office, which added that families enjoying national parks are “not endangering public health.”

COVID-19 in Arizona: Navajo Nation sees a spike in cases

As part of President Donald Trump’s plans for “Opening Up America Again,” Interior Secretary David Bernhardt last month began traveling to national parks around the country, including the Grand Canyon, to meet park officials and talk about reopening.

The Grand Canyon closed to all visitors on April 1 because of COVID-19, but began a partial reopening of some South Rim facilities on May 15-18. The park had a limited opening again on Memorial Day weekend, then reopened last Friday and is scheduled to stay open until Thursday.

Other national parks that have begun reopening include the Great Smoky Mountains, Zion, Yellowstone, Olympic and more.

Ben Goldey, the Interior Department spokesman, said Bernhardt and Nez met May 21, when Bernhardt agreed not to reopen the East entrance to the Grand Canyon, which can only be reached by crossing the Navajo Nation.

But Nez said that message does not appear to be getting to tourists, pointing to heavy traffic across the Navajo Nation over the past two weekends, despite strict curfews and travel restrictions because of the coronavirus.

“Nobody told visitors that Navajo Nation has those regulations in place,” Nez said, noting that there is a citation for breaking the lockdown could bring fines of up to $1,000. “Tons of people shows that visitors didn’t know what’s going on or are purposely not abiding by the rules we have.”

Tilousi said she has sent multiple letters to Interior that have not even been acknowledged, telling the panel the Havasupai’s concerns “have fallen on deaf ears.” She said she worries for her “small tribe of 757 members.” 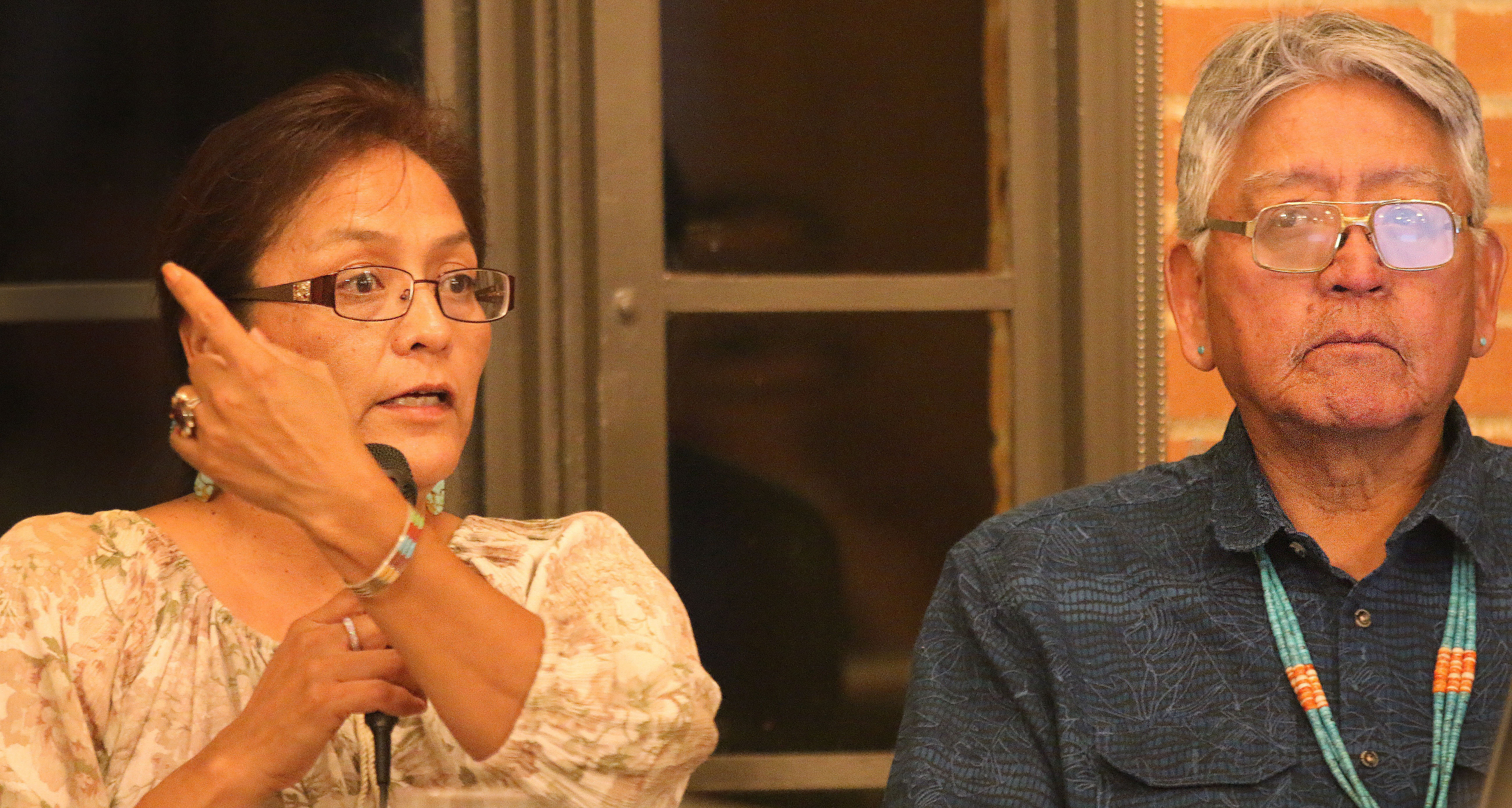 Havasupai Council member Carletta Tilousi, in a 2016 file photo with Robert Tohe, told lawmakers that exposure to COVID-19 could lead her small tribe to “be extinct.” (Photo by Isabel Menzel/Cronkite News)

“We are afraid that my people will be extinct,” she said. “This is a very dangerous pandemic and it spreads rapidly.”

The Havasupai Tribe currently has no confirmed COVID-19 cases, which Rep. Ruben Gallego, D-Phoenix, attributed to the Havasupai “tribal government for having such strong leadership.”

Even though Interior was not invited to testify Tuesday, Goldey defended the department’s phased reopening of national parks as safe and said the parks are “welcoming visitors again with more to join the ranks in the coming days and weeks.”

But witnesses at the hearing – titled “Not So Grand Opening: Examining Local Perspectives on the Department of the Interior’s Plan to Reopen National Parks During the Coronavirus Pandemic” – disagreed, saying there has been a lack of safety guidelines from the government.

“There was no national leadership or plan,” said Phil Francis, chair for the Coalition to Protect America’s National Parks. “The approach was chaotic and piecemeal.”

Nez said he is not optimistic that the park reopenings will be paused for health concerns any time soon.

“They are going to open all the parks because his (Bernhardt’s) boss wants them open,” Nez said during the forum. “And we know who his boss is.”