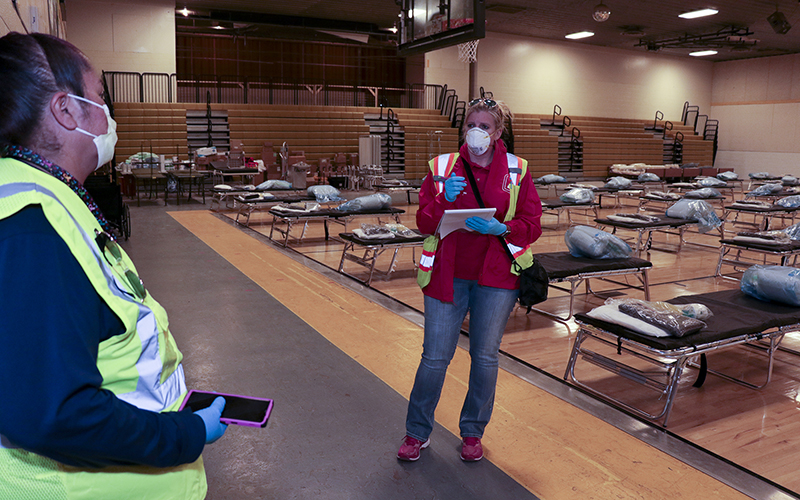 The Navajo Nation was hit by COVID-19 infections relatively early in the pandemic, and teams from the U.S. Army Corp of Engineers were in Arizona in April to assess local sites for possible conversion to alternative treatment facilities in case they were needed for a surge in cases. (Photo by Los Angeles District/U.S. Army Corps of Engineers) 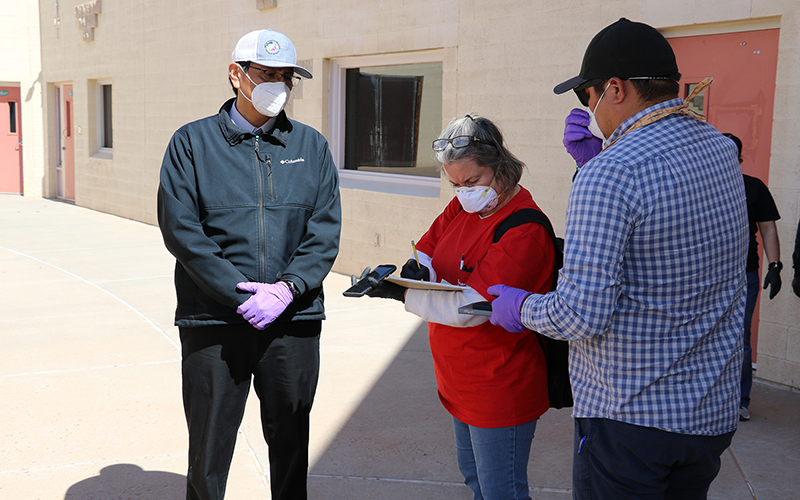 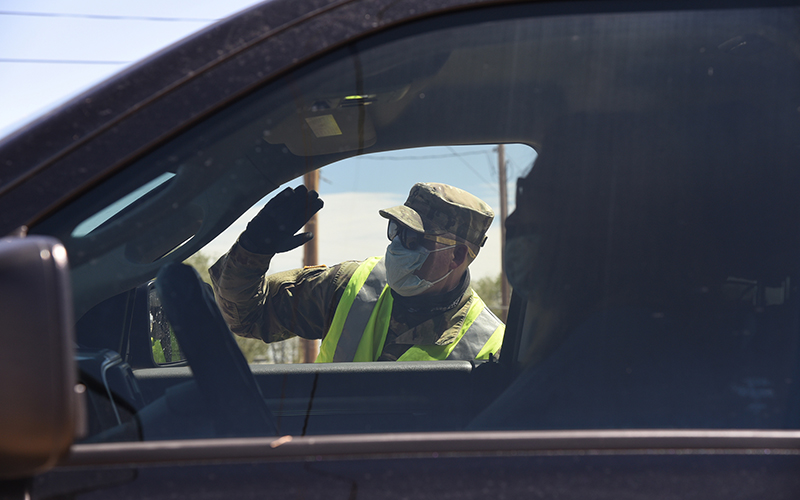 An Arizona National Guardsman direct visitors to the check-in at a COVID-19 testing site Tuesday in Tonalea on the Navajo Nation. The Navajo has some of the highest rates of COVID-19 infestion in the nation, but a new report suggests they are among the tribes who may not be getting what aid they are due under the CARES Act. (Photo by Tech. Sgt. Michael Matkin/Air National Guard)

Arizona tribes were among those who could get too much – or too little – COVID-19 relief funding under a Treasury Department funding formula that is based on “probably not the best numbers,” according to the author of a new report.

The policy brief from the Harvard Project on American Indian Economic Development and the University of Arizona’s Native Nations Institute criticized the formula used to allocate the first $4.8 billion of relief to tribes under the Coronavirus Aid, Relief, and Economic Security (CARES) Act.

Treasury and the Interior Department said in a May 5 statement that they used a formula aimed at ensuring that every tribe gets at least $100,000, with larger tribes getting more based on population.

But while Treasury asked tribes to confirm their number of enrolled members, it ultimately based its formula on data from the Department of Housing and Urban Development’s Indian Housing Block Grant, which draws from Census figures to determine tribal population. That decision resulted in a process that the brief said “demonstrably produces arbitrary and capricious allocations of CARES Act funds across tribes.”

“Treasury had tribes certify the number of enrolled members, the tribal citizens, and it turns out they didn’t use that number at all,” said Miriam R. Jorgensen, a co-author of the report. “The numbers that were used for distributing those monies … were probably not the best numbers to be using.”

That led to some tribes getting more than their population would indicate, including the Hopi and White Mountain Apache in Arizona, which ended up with $56 million and $16 million more, respectively, than they were due, the report said.

But others look to have been underfunded, including Arizona’s Tohono O’odham, Pascua Yaqui and the Navajo – one of the nation’s largest tribes, which is suffering some of the highest rates of COVID-19 infection in the nation.

The report estimates that the Navajo got $32 million less than they would have based on enrollment numbers from the tribe. The Tohono O’odham were underfunded by $27 million and the Pascua Yaqui by $12 million, the brief said.

Navajo Nation President Jonathan Nez said that 350,000 people identified themselves as Navajo in the 2010 Census. There are, however, “about 175,000 to 200,000 Navajos that are living within the jurisdiction of the Navajo Nation. So that is about half of our citizens living off the Navajo Nation,” he said.

Treasury officials did not respond to requests this week for comment on the funding brief’s criticisms.

The $4.8 billion is the first 60% of a total $8 billion in tribal relief funds that were authorized as part of the $2 trillion CARES Act. The rest of the tribal funds will be allocated based on the number of employees each tribe has and on how hard they have been hit by the coronavirus, according to Treasury.

The Navajo Nation has been one of the hardest-hit communities in the U.S.

The Navajo Nation Department of Health reported Thursday that there were 4,434 confirmed cases of COVID-19 reported and 147 deaths from the disease.

Cases have continued rising despite strict restrictions imposed by the tribal government – including a lockdown this weekend set to run from 8 p.m. Friday to 5 a.m. Monday. And the numbers are likely to increase again, as the tribe engages in large-scale testing.

Jorgensen, research director at both the Harvard project and the Native Nations Institute, said in a video interview on the report that there is still a chance for Treasury to make things right in the later rounds of funding.

The report noted that the Treasury is “seeking guidance on the appropriate formula” for later rounds of tribal funding, which Jorgensen said could give tribal leaders a chance to speak to federal officials about the problems with the first-round allocations.

In the meantime, Navajo Nation Vice President Myron Lizer said all that tribal officials can do is continue working to fight the disease – and remain optimistic.

“We are in this together, and together we will overcome,” he said in the Tuesday statement from the tribe. “Don’t lose hope and please keep praying and keep fighting this virus by staying home as much as possible and practicing social distancing. We can’t let up now.”