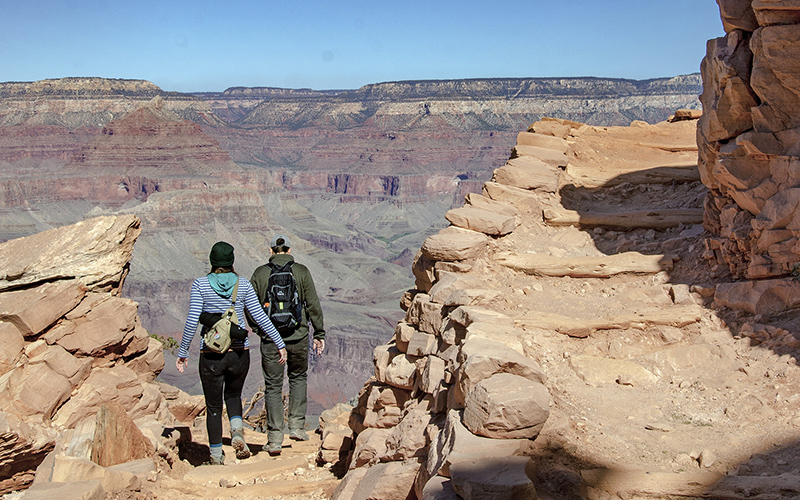 Hikers on the Grand Canyon National Park’s South Kaibab Trail in October 2019. The park, which has been largely closed by COVID-19 since April 1, will reopen limited services on the South Rim for Memorial Day weekend – a move critics say comes too soon for health safety in the face of the coronavirus. (Photo by Michael Quinn/National Park Service)

PHOENIX – The Grand Canyon will reopen on a limited basis for Memorial Day weekend, a move critics call “premature” during the COVID-19 pandemic and “tone-deaf” in the face of startling infection rates on the neighboring Navajo Nation Reservation.

The opening, from Friday to Monday, is just the second at the park, which was completely closed to visitors on April 1 to stem the spread of the novel coronavirus that causes COVID-19. The park also opened for four days last weekend on a limited basis.

Entry will be allowed to the South Rim from 4 a.m. to 10 a.m., with visitors who are in the park by then allowed to stay until sunset. Food service, bike rentals and a limited number of trails will be available, while residential areas, sit-down restaurants, visitor centers, museums, shuttle buses and some roads will remain closed.

The park said in a statement that it will follow state and federal guidelines for health safety, encouraging social distancing by limiting groups to 10, with park rangers ready to step in if needed.

“We’re encouraging people to recreate responsibly and to read up on any national park that they are going to, to find out what is open and closed,” said Lily Daniels, a spokeswoman for the park.

But critics said there is no reason to rush the reopening of the park.

“It’s premature and it’s irresponsible,” said Sandy Bahr, director of the Sierra Club’s Grand Canyon chapter. “On a holiday weekend, how are they going to maintain the social distancing guidelines with huge crowds?”

The Grand Canyon is the only national park in Arizona set to reopen for the holiday weekend. Although some have started the process of a phased reopening, 12 of the 24 national parks in the state remain completely closed.

It comes as Interior Secretary David Bernhardt has been traveling the country in recent weeks to inspect reopened national parks and wildlife centers, as part of the White House’s plans for Opening Up America and getting the economy moving again.

“We will continue to work to restore access to your parks so you can enjoy the benefits of the great outdoors at our national parks,” Bernhardt said in a video posted on his Twitter account.

Critics pointed to the Navajo Nation as another reason why the Grand Canyon should not reopen. The Navajo are suffering from one of the highest rates of COVID-19 infection per capita in the nation, but Bahr said many travelers have to drive through the reservation to get to the canyon.

“At the Grand Canyon especially, it (reopening) seems tone-deaf when the Navajo Nation is undergoing such horrible troubles in this pandemic,” said Kevin Dahl, Arizona senior program manager for the National Parks Conservation Association.

The park reopening comes as Navajo leaders on Tuesday announced a weekend-long lockdown beginning at 8 p.m. Friday and continuing through 5 a.m. Monday. The order follows several weekend curfews on the vast reservation, but the curfew will be expanded to include the closure of most essential businesses and bans on most travel. 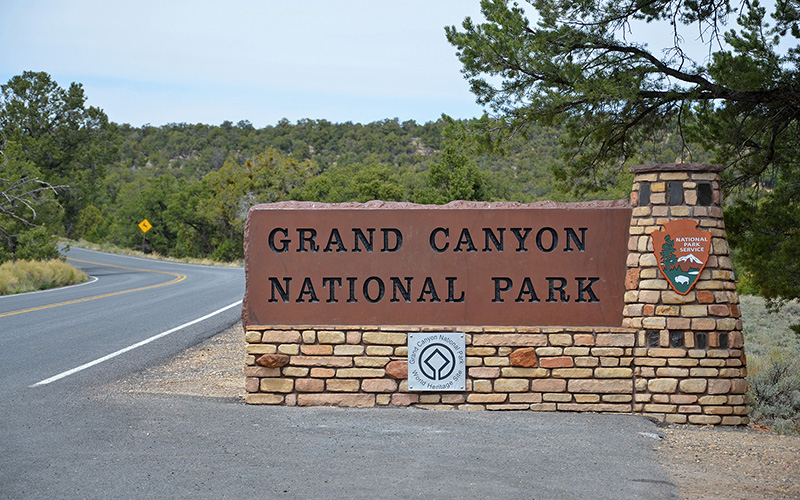 The east entrance to Grand Canyon National Park will be closed, even as parts of the park reopen. The entrance is nearest the Navajo Nation Reservation, which is under lockdown this weekend to battle the spread of COVID-19. (Photo by Michael Quinn/National Park Service)

Daniels said the park is aware of conditions on the reservation and is keeping eastern access to the Grand Canyon closed in an effort to limit traffic crossing tribal lands.

“We are still looking at how we can safely and responsibly offer access within the park,” she said.

Daniels said the park this weekend will offer visitors more opportunity to park, hike and walk around than last weekend’s opening did, and that there will be extra signage to encourage social distancing.

But Dahl said that park rangers “have other things to do than to enforce physical distancing, which absolutely has to happen in Arizona.”

“We absolutely understand people’s desires to get outdoors,” he said. “But it’s too soon.”

In addition to the risks to visitors, he said reopening could threaten the roughly 2,500 residents of Grand Canyon Village, many of whom work for or at the park. Between its close-knit community and limited medical services, Dahl said an outbreak there would be “a recipe for disaster.”

Bahr said the announcement for last weekend’s opening May 15-18 was not as widely advertised as this one, which is sure to bring more crowds for the holiday weekend.

“The responsible thing to do right now is to wait,” Bahr said. “It’s just not worth the risk right now.”