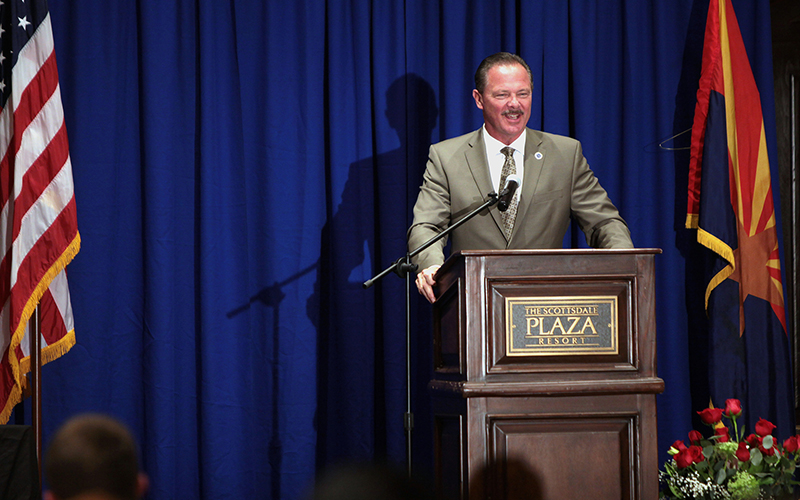 WASHINGTON – The financial and health effects of COVID-19 have been well documented, but Scottsdale Mayor Jim Lane said Wednesday that he is just as concerned about the impact the pandemic has had on the American psyche.

“It was a gut punch to go from a strong economy to shutdown,” Lane said during a webinar with state and local government leaders from around the U.S. on the coronavirus’ impact.

His comments came as part of a discussion, sponsored by FiscalNote and CQ/Roll Call, on “State of the states: Reopening, budgets, and the prognosis for the rest of the year.”

But while the officials talked a bit about the economic toll the pandemic has taken on their communities, they spent most of their time talking about the process of reopening the economy and the challenge of balancing the needs and concerns of urban and rural communities.

Others on the webinar included Lexington, Ky., Linda Gorton, a Republican, and Maryland state Sen. Brian Feldman, a Democrat. While they came from opposite sides of the aisle, all four officials stressed the importance of working together and cooperating as the key to reopening state economies.

Arizona, like most states, has moved away from the stay-at-home orders that were in place at the height of the COVID-19 crisis and has started reopening public spaces and businesses with some restrictions.

As of Wednesday, Arizona reported 14,897 confirmed cases of COVID-19 and 747 deaths from the disease, according to the Arizona Department of Health Services.

But Gov. Doug Ducey said that the trend of infections was moving in the right direction when he announced earlier this month that he would begin lifting restrictions. His full stay-home order officially ended May 15.

While Feldman said Maryland Democrats have parted ways recently with Republican Gov. Larry Hogan’s moves to reopen the economy in that state, after initially working well together, Lane praised the Ducey administration for its communication with local officials. He said the approach has not been heavy-handed but has been to work with the public.

He said that approach has included identifying two categories when it came time to decide on reopening for businesses: essential workers/business and essential amenities.

Essential businesses include such things as food, utilities and public safety providers, he said, while essential amenities were services such as salons, gyms and parks.

The decisions were not absolute, however, with Lane noting that Scottsdale left parks open to help people preserve their mental health by getting out occasionally.

“In situations where people congregated too closely, we shut those down,” he said.

Many states are taking a more cautious approach. Argall noted that Pennsylvania has set up a stoplight-style system, under which parts were designated red, yellow or green in their readiness for reopening. But Argall joked that restrictions were getting stale for him.

“I’m getting really tired of leftovers,” he said, joking that he might have to go to Lexington after Gorton noted that they had recently reopened restaurants in Kentucky.

While they were glad to see their states moving toward reopening, Lane said officials are all aware that they have to keep tabs on the progress of the disease and be ready to shift as needed. He said state and local officials will reassess protocols during the second phase while trying to allow for a more normal living.

“We have come to the realization that COVID will be with us,” he said.