A wildfire burns near a home in California in this 2009 file photo. Wildfires in Arizona are nothing new, but a new tool from the U.S. Forest Service shows that homes and businesses in the state are at a relatively higher risk from wildfires than those in other states, (Photo by Anthony Citrano/Creative Commons)

PHOENIX – If there’s any doubt that wildfire poses a high risk to property in Arizona, the U.S. Forest Service would like to paint a different picture – in blazing reds and flaming yellows.

Those colors blanket the state in a tool the service released last month that attempts to show wildfire risk to communities across the nation, using wildfire data from recent years to project the risk to homes, exposure types, vulnerable population statistics and wildfire likelihood.

The Forest Service said the interactive website “provides a starting point for community leaders and fire experts when assessing and taking steps to reduce risk to homes, businesses and community resources.”

In Arizona, the map shows not just a high likelihood of wildfire across the state, but a high risk of wildfire damage to many Arizona homes and communities.

It says 24% of homes in that state are likely to be exposed to a direct wildfire threat from forested areas and 32% are faced with the threat of an indirect exposure, which can be spread from home to home. That put Arizona in the 88th percentile among states for the level of risk to homes.

Andrea Thode, a professor in fire ecology at Northern Arizona University, said the risk in the state comes from the “surprisingly high” amount of infrastructure in the wildland-urban interface, the zone where homes and forests meet.

“As the challenge of catastrophic wildfires and growing populations converge, we need more cross-boundary, collaborative tools to manage and mitigate risk,” she said in a press release announcing the new tool. “This website provides community planners, community leaders and fire managers more information at their fingertips, creating opportunities to better understand, assess and prepare for wildfire risk.”

Arizona fire experts say it is important to have such tools to help homeowners and firefighters prepare since “wildfire knows no boundaries.”

Molly Hunter, a research scientist at the University of Arizona and senior adviser of the Joint Fire Science program, said populated areas like Flagstaff and Prescott Valley that are “built right into the wild lands” are at high wildfire risk. She said when prolonged spring dry spells follow a wet winter, it builds up fuel that contributes to fire danger. 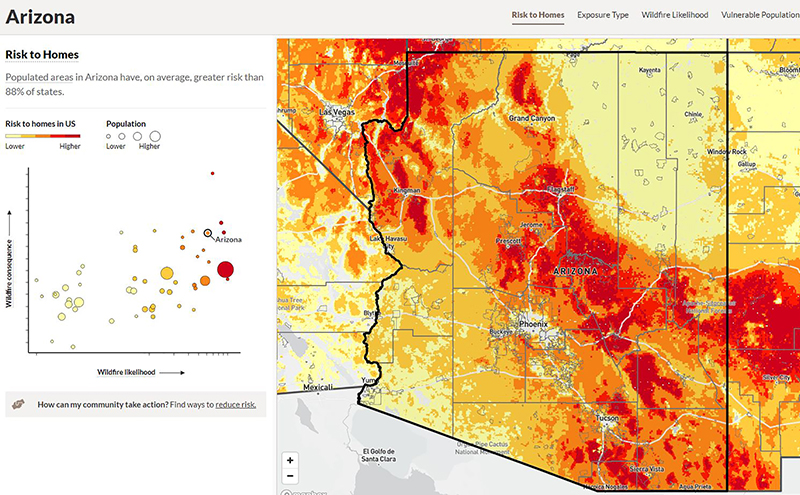 Tiffany Davila, a public affairs officer with the Arizona Department of Forestry and Fire Management, said that properly assessing wildfire risk in specific areas is “the biggest component” in taking preventive action, in training and preparing resources. She said fire officials work with federal and state partners to make sure all areas of the state are covered, to inform communities of the role they play in wildfire prevention and more.

While the Forest Service tool aims to help officials plan their efforts, the Arizona Department of Forestry and Fire Management has its own wildfire risk portal aimed at helping individual communities and homeowners prepare. The site lets homeowners type in their address to see their individual wildfire risk and threat.

“One of the biggest pushes that we do throughout the year is working with homeowners to create defensible space around their property,” Davila said. “It’s a two-way street. We have to do our part and the homeowners have to do their part as well.”

For homeowners, that means making sure their grass is cut, their gutters and roofs are clean, there are no dead trees and limbs hanging over their houses, grills are moved away from homes and more.

Thode said there are other preparations that are often overlooked: Whether there is a prescribed fire or wildfire, she said, people tend not to prepare for the amount of smoke in the air, making it harder to breathe and see, especially with high winds.

“Being prepared ahead of time, having a plan for your family, having a list of the kinds of things that you would take if you were evacuated, those become even more important for elderly folks and people with disabilities so that those lists are in place and someone could come in and help after being handed a list,” Thode said. 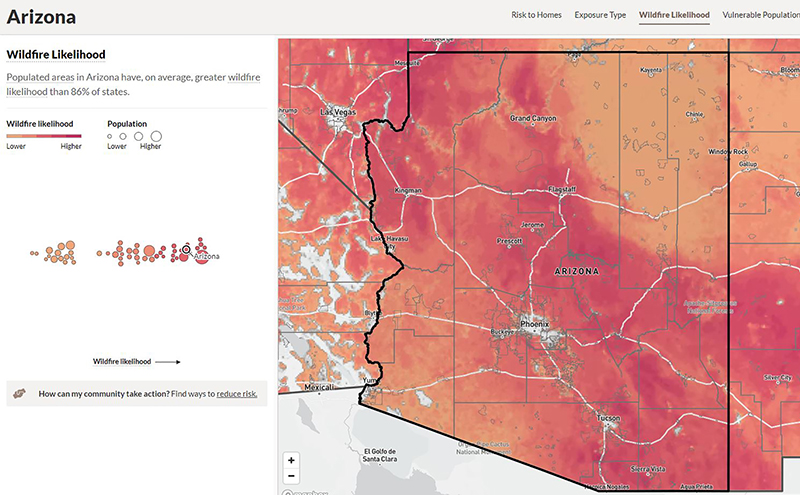 With its climate and large expanses of wilderness, it’s no surprise that Arizona has a relatively high likelihood of wildfires, but that risk affects communities more than in other states. (Photo courtesyn U.S. Forest Service)

She said it’s particularly important to take preventive actions this year, when firefighters will face the challenges of battling blazes while coping COVID-19. Arizonans should be raking their pine needles, cleaning out their gutters, holding off on starting campfires at the wrong times and taking other measures to “work ahead of time because that always keeps the risk to our firefighters down.”

“It’s harder to fight fire safely this year,” Thode said, noting that fewer fires will mean less time firefighters and others are exposed to the COVID-19 virus.

Davila said officials in Arizona now find themselves fighting wildfires year-round, but that activity picks up when temperatures start to rise and vegetation dries out, until monsoon season.

With no real start and end date of wildfires, she said state officials work on fuel mitigation and prescribed burns throughout the year to reduce risk. She said Arizona has already started seeing an uptick in fire activity, since “we’re in higher temperatures than normal at this time of the year.”

Hunter said while “there’s a whole spectrum of things that people could do to try to reduce their own risk,” people should take communal action.

“It’s better to act as a community because what your neighbor does influences your own threat and your own safety,” Hunter said.