PHOENIX – At 26, Phoenix artist Amanda Adkins was diagnosed with an invisible illness that caused her excruciating abdominal and pelvic pain. During laparoscopic surgery, doctors found that the tissue lining her uterus had penetrated her bowels and bladder. She had stage one endometriosis.

The menstrual disease often is thought of as “just a bad period,” but it’s much more complex than that. Endometriosis is a chronic disease in which endometrial tissue, which usually grows inside the uterus, grows where it shouldn’t. The endometria become inflamed as they respond to the woman’s menstrual cycle, often resulting in intense pain and sometimes internal bleeding.

An estimated 1 in 10 women worldwide suffer from endometriosis, also known as endo. Adkins, who was diagnosed 17 years ago, has created a series of paintings called “Crow Speaks” to encourage more women to speak up about the disease.

Advocates say a lack of awareness among doctors often leads to improper treatment and delayed diagnoses.

“It will take a woman between seven to 10 years to be correctly diagnosed with endo,” said Margaret Cianci, executive director of the Endometriosis Foundation of America.

The disease can be diagnosed through laparoscopy, in which surgeons use a camera to search the abdomen for abnormalities. Tissue biopsies are then performed to confirm the diagnosis.

There are ways to treat and manage endometriosis, which is considered a chronic illness, but there is no cure. Even with a complete hysterectomy, women will have it for the remainder of their lives because bits of endometrial tissue remain stuck to internal organs.

Adkins said she has had multiple surgeries to help alleviate the pain and improve her quality of life. One of her surgeries resulted in internal bleeding and rehospitalization. She was put on a respirator and fell in and out of a coma for three days.

“I didn’t realize endo can take so much from me and do so much to my system,” Adkins said. “You don’t realize it until it starts taking pieces of you, literally. It’s affected every aspect of my life.”

Adkins wanted to use her platform as an artist to tell her endometriosis story and empower women like her.

“Talking about it can make a difference,” she said.

“Crow Speak” was inspired by a study 12 years ago by wildlife biologist John M. Marzluff that found crows are intelligent enough to recognize danger and warn younger generations. Adkins believes that women with endometriosis become stronger once they learn to speak about the disease and advocate for themselves. 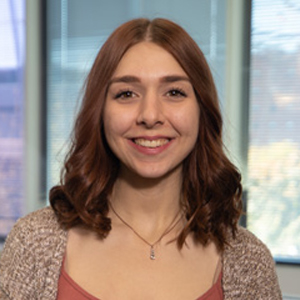