Across the U.S., as many as 29,000 Deferred Action for Childhood Arrivals recipients may be working in health care jobs that are on the front lines of the fight against COVID-19, according to one recent report. Thousands more work in teaching and food industries, the report claims. (Photo by Pathumporn Thongking, U.N. Women/Creative Commons) 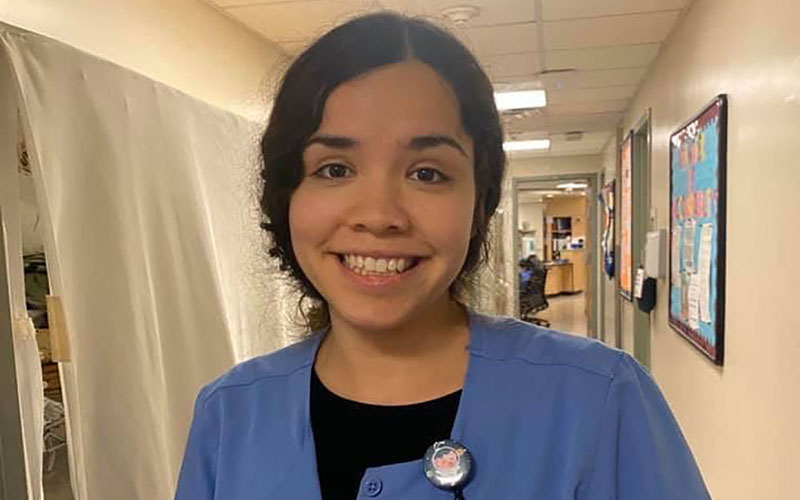 Maria Leon Peña, now 23, came to this country from Mexico at age 5. The Phoenix nursing assistant is one of an estimated 29,000 undocumented health care workers in the U.S. – part of the 157,000 DACA recipients who may be on the front lines of the fight against COVID-19. (Photo courtesy Maria Leon Peña)

PHOENIX – The COVID-19 pandemic has changed everything from how most Americans work and shop to how they socialize – even if they can be in the same room.

For Maria Leon Peña, it could change her chances of staying in this country.

The Phoenix nursing assistant is one of an estimated 29,000 health care workers in the U.S. who are undocumented, according to a recent report, but have remained in this country under the Deferred Action for Childhood Arrivals, or DACA, program. A program that the Trump administration is trying to abolish.

Those health care workers, along with the thousands of other DACA recipients working in essential services, were cited last month in an unusual “after arguments” brief to the Supreme Court, which heard the DACA case in November – before anyone had heard of COVID-19.

“It (COVID-19) throws into sharp relief DACA recipients’ important contributions to the country and the significant adverse consequences of eliminating their ability to live and work without fear of imminent deportation,” said the brief from the National Immigration Law Center.

The court is expected to rule by this summer on whether the Trump administration acted properly when it announced in 2017 that it was ending DACA, an Obama-era program that deferred deportation as many as 800,000 immigrants who had brought to this country illegally as children. Almost 650,000 remained at the end of last year.

“It’s been a roller coaster because we don’t know what’s going to happen,” she said.

Leon Peña, now 23, came to Arizona from Mexico with her mom and a brother when she was 5. She was working toward a degree at a local community college, that she paid for herself with the help of some academic scholarships, when President Donald Trump took office in what she said felt almost like a “plot twist.”

Of the 23,990 DACA recipients in Arizona, an estimated 6,800 are working at the forefront of COVID-19 response, according to the center’s estimates.

Four Arizona lawmakers were among the 101 House Democrats who wrote the Department of Homeland Security and U.S. Citizenship and Immigration Services in April, urging officials there to automatically extend work authorizations for DACA recipients. The renewal process has been complicated by the USCIS decision to close offices in the face of COVID-19.

Rep. Greg Stanton, D-Phoenix, one of the lawmakers on the letter, said the pandemic shows “literally just how essential our DACA recipients are in this effort to fight the virus.”

“How can we not automatically authorize them to work? They’re working in these critically important positions, fighting the greatest pandemic in a hundred years,” he said.

“We need them,” Stanton said. “We can’t successfully win this fight against the coronavirus without these essential workers, and so many of them are DACA recipients.”

Nicole Svajlenka, the Center for American Progress’ associate director of research, said she compiled the report on front-line DACA workers because she wants to help build the case that they are consistently contributing to the country in essential roles.

She said DACA recipients also contribute when there is not a crisis. An April study she co-wrote on the economic impact of DACA recipients reported that they pay $159.8 million a year in federal taxes and $90.2 million in state and local taxes in Arizona, where they own around 2,600 homes with $21 million in annual mortgage payments.

“This was really just another illustrative point of how important DACA recipients are to their community and to the United States as a whole,” she said of their role during the pandemic.

Leon Peña’s role involves 12-hour days in a Phoenix hospital, three days a week, where she works one-on-one with patients post-surgery. The biggest change to her job, she said, is that with fewer surgeries scheduled, she can spend more time with each patient, sometimes spending a whole shift with one of them.

Patience and empathy are key, she said, for patients who are missing a family member, lonely or in pain. With the COVID-19 crisis, many hospitals have restricted visitors, so she is there to help – to listen and support them.

“They’ll get more agitated because they’re alone, or they miss a family member or they don’t know us at all,” she said.

Leon Peña said the coronavirus has “made it harder for the patients and also a little harder for the workers. It’s always nice to be able to be there for them and put myself in their shoes, just do my best to make them as comfortable as possible.”

Leon Peña said DACA has allowed her to get a driver’s license and move her mother and two younger brothers out of a trailer park. It allowed her to get a job in a career she loves. But she can’t help but imagine what life would be like if she were a citizen. Her status makes it hard for her to fully pursue her dreams – such as her goal of becoming a pediatrician.

Still, she is not giving up and not backing down.

“I know as much as some people want to tell me that I’m a cost, or that I’m not worth it, or that I need to go home or back where I came from, that I’m just taking away from the state … I know that’s not true because I’ve lived in Arizona for so long,” Leon Peña said.

She said things could be worse for her, but she is “going to stay where I feel home is now.” She’s happy she has a job during this time and is grateful to have the opportunity to help her community.

“And I’m going to keep doing my best to be a good citizen at heart,” she said. “That’s the conclusion I’ve come to. I’m just going to keep going one step at a time and see what happens.”