Celebrations scrapped, flights canceled and many tears shed: College graduation in the era of COVID-19 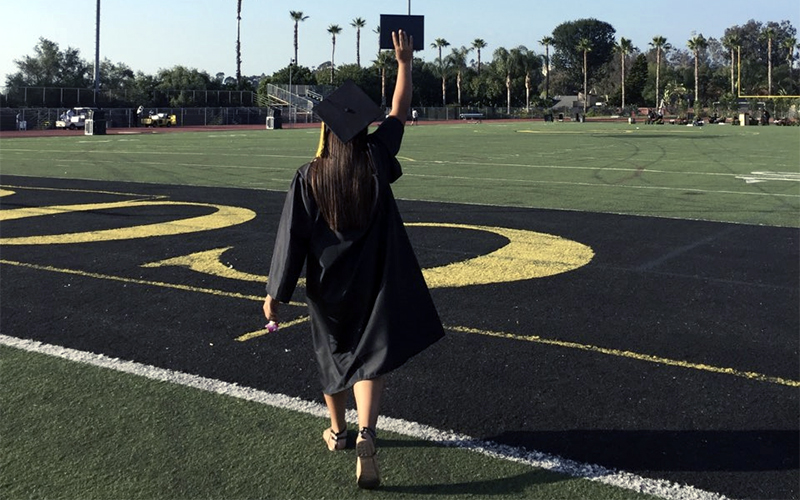 PHOENIX – Graduating college is a milestone for all, but it’s an especially momentous time for those who are the first in their families to receive a diploma.

Commencement is just one of the watershed events upended by COVID-19, prompting colleges and universities across the nation to cancel or postpone ceremonies or create a virtual alternative.

For some first-generation students who worked for years to get to walk the commencement stage, and for the relatives who supported them, big celebrations now have been scrapped, plane tickets canceled and many tears shed as a once-in-a-lifetime occasion falls victim to the pandemic that shut down schools beginning in March.

In more ways than one, Rachel Fisher is a nontraditional student. She’s 41, a mother, visually impaired – and about to be the first in her family to graduate from college.

Fisher grew up in Cicero, Illinois, where her father was a truck driver and her mother worked in the state’s payroll department. 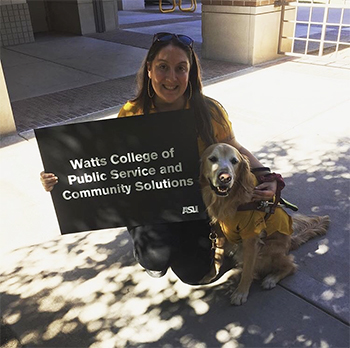 Rachel Fisher, 41, serves as a guide during Arizona State University’s student orientation in summer 2019. When Fisher heard that graduation had moved online: “I cried,” she said. “To not be able to walk onstage and get that feeling after not having it and waiting so long, it’s heartbreaking.” (Photo courtesy of Rachel Fisher)

“We didn’t have money saved for college,” she said. “I didn’t have a scholarship or a way to go.”

It wasn’t just her family’s economic situation that made it difficult to pursue higher education. Fisher has a degenerative eye condition that has impaired her vision.

Fisher graduated high school, but she didn’t get to walk across the stage to receive her diploma because she wound up in summer school over a disputed credit. After high school, she had a daughter, who’s now 15, and started working in recreational therapy.

After moving to Phoenix eight years ago, Fisher connected with an adult program at the Foundation for Blind Children, which helped her enroll in Rio Salado College and then Arizona State University.

“When I found out ASU had a degree in (recreational therapy) – being able to help other people with disabilities – I was super excited,” she said.

Fisher’s father, her biggest supporter, died before she enrolled in ASU. But her mother, Diane, had been scheduled to fly from Illinois to be there when she graduated.

All of that changed when, amid the ongoing coronavirus outbreak and restrictions on large gatherings, ASU President Michael Crow announced April 2 that spring commencement ceremonies would move online.

“To not be able to walk onstage and get that feeling after not having it and waiting so long, it’s heartbreaking,” said Fisher, whose mother will watch online from afar.

Graduates may attend the fall 2020 or spring 2021 ceremonies, but Fisher isn’t inclined to do so.

If there’s any silver lining, Fisher was chosen as the outstanding graduate student for the School of Community Resources and Development.

“Part of being nominated, you are allowed to walk in with the banner, the goliath for your school, and I’m not going to get to have that,” she said. 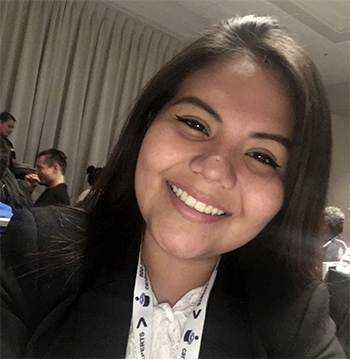 In Mexico, Jocelyn Gomez’s mother used to sneak out of the house to attend school. When she heard that her daughter wouldn’t be able to walk across the stage to receive the family’s first college diploma, she was the one in tears.

“I wasn’t surprised, because all of the neighboring schools around Arizona were already canceling the ceremonies,” Gomez said. “My mom cried.”

“My dad has a third-grade level education. … For them, me being the eldest and being the only daughter, for me to go to college was a big feat.”

Gomez grew up in California’s San Fernando Valley after her parents emigrated from Mexico. Her father, a bus driver, had to drain a bank account to pay for her last semester.

Gomez said she’s trying to remain optimistic, “just keeping a positive mindset and not letting it get to you as bad as it has been getting to some people.”

Jennifer Guzman’s parents came to the United States from Mexicali, Mexico, to give her new opportunities, but her pathway to college wasn’t easy.

Growing up in Yuma, she was part of the U.S. Department of Education’s Migrant Education Program that helps migratory students graduate from high school. Guzman’s father works in the fields around Yuma.

“We are not always expected to graduate, or to even go to college,” Guzman said. 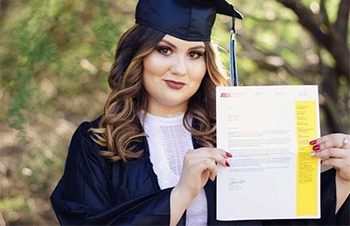 Jennifer Guzman, 21, holds her acceptance letter to Arizona State University at her 2016 high school graduation. Guzman wasn’t surprised that her college graduation moved online, but she was disappointed. “I think it came as expected with everything else getting canceled.” (Photo courtesy of Jennifer Guzman)

When her parents found out that her graduation ceremony was moved online, they were disappointed.

“My parents even talked about renting a house for a week,” Guzman said. “We wanted to make sure that whatever family wanted to go was able to, because I’m the only one who’s ever been in this position.”

Guzman hoped ASU would offer another option for graduating seniors.

“I think it came as expected with everything else getting canceled,” she said. “But at the same time, it was kind of disheartening that they wanted to shift everything online.”

Beyond her parents, she laments that her nieces and nephews won’t be able to see her walk that stage. She was excited about giving them the chance to “see someone from their family have an accomplishment like this,” she said.

“I feel bad for you,” her nephew told her.

“He was really looking forward to it,” Guzman said.

Jennifer Vazquez doesn’t even have a virtual ceremony to look forward to. The school, for now, has postponed its scheduled May 15-16 commencement ceremonies, saying graduation would be held later this year.

Among those most heartbroken is Vazquez’s father, who, along with her mother, is an immigrant from Mexico.

“He was the one who really pushed for education and was the one who tutored me in math,” she said. “I feel like in a way it’s not only my accomplishment, but also he can see that the work he put in was worth it. To see me happy and with my degree is most important to him.” 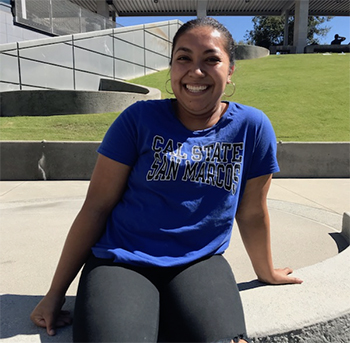 Jennifer Aguirre Vazquez, 21, poses in front of the amphitheater at California State University San Marcos in 2019. Being the first in her family to graduate from college is a huge feat, even if the ceremony itself has been postponed. “I grew up in an area where we’re seen as at-risk youth,” she said. “So going to college, and growing up in that area, was something that was very phenomenal.” (Photo courtesy of Jennifer Aguirre Vazquez)

Vazquez was raised in a largely Latino area close to San Juan Capistrano, California. Her father is a construction worker, and her mother works at a market. Her parents didn’t receive any formal education after elementary school.

“I grew up in an area where we’re seen as at-risk youth,” Vazquez said. “So going to college, and growing up in that area, was something that was very phenomenal.”

Cal State San Marcos made its graduation announcement earlier than other universities, on March 18, one day before Gov. Gavin Newsom issued a statewide stay-at-home order.

“I cried for a good while,” Vasquez recalled.

Her mom has accepted the bad news, because most important is that her daughter will have her degree.

Like most students, Vazquez already had paid for her cap and gown.

“My older sisters are very frustrated because they were excited to see me in my cap and gown, and see me receive a diploma and take photos and all,” she said.

For now, she’s trying to stay focused on the positive.

“I still have my cap and gown, and I still have my achievements and awards,” she said. “And for me, that’s enough, as long as I get to spend a celebration period with my family.”

As for those celebrations, she hopes to be with her family and have a big backyard carne asada barbecue to commemorate the moment.

“Something that’s really helped me is talking to my family about it and realizing that although the ceremony is postponed, the accomplishment and awards I’ve received are still there.”