A White House official confirmed Wednesday that President Donald Trump will visit the Phoenix Honeywell facility for an industry event May 5, despite Gov. Doug Ducey extending his stay-at-home order to May 15. The visit marks the first time the president has traveled outside Washington, D.C., since the end of March.

The visit is meant to highlight the company’s production of essential medical equipment, such as N95 masks, and the addition of 500 manufacturing jobs at the jet engine facility near Sky Harbor International Airport, a White House official told Cronkite News.

“The president is always welcome in Arizona,” Ducey said at a news conference Wednesday, acknowledging that Trump often attracts large crowds. At Trump’s most recent campaign rally Feb. 19, 10,000 gathered in Phoenix to cheer the president and a couple hundred more gathered outside. The Honeywell event will not be open to the public.

Ducey encouraged people not to gather for next week’s visit, but when asked whether he would break up potential crowds, he only offered, “I’m asking people to stay home, stay healthy and stay connected.”

As of Thursday, the Arizona Department of Health Services reported 7,648 cases of COVID-19 and 320 deaths in the state. It said 71,786 tests for COVID-19 have been completed April 30 in public and private labs in Arizona, and 9% of tests have come back positive for the virus that causes the disease. 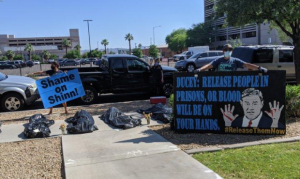 The ACLU says Ducey did not respond to their letter demanding the governor issue an executive order allowing some prisoners to return home to their families to prevent more positive cases and COVID-19 deaths in prisons. The letter also instructed the detention centers to implement additional safety and health protections, emphasizing how social distancing is nearly impossible in correctional facilities.

Two incarcerated men in Arizona prisons have died of COVID-19. The first death was a 64-year-old man with diabetes and the second was a 79 year-old man with lung cancer, the Associated Press reports.

Arizona State University announced Thursday it plans resuming classes in-person for the upcoming fall semester. President Michael Crow wrote in a letter to the ASU community that classes would resume Aug. 20. The school has made additional adjustments to curriculum as a result of the outbreak, including no longer requiring LSAT scores when applying to the Sandra Day O’Connor College of Law.

More than 200 artists and art professionals throughout Arizona will receive emergency relief grants from an emergency fund created by a group of art funders and organizations. Each artist will receive up to $750 to supplement income lost to the coronavirus. Demand for the relief was so high that those who will be receiving it only represent 45% of the initial application pool.

Gov. Ducey announced a plan Wednesday for restaurants to gradually begin reopening and providing dine-in services as part of his revised order to get the state back on track. Ducey said he hopes restaurants will return to full operations as early as May 12. Some businesses have already announced their intentions to defy the stay-home order, which Ducey on Wednesday extended to May 15. In Wickenburg, businesses plan to reopen Friday.

Tribal data not included in COVID-19 tracking by ZIP code

Tribal data is excluded in the state’s data tracking of the coronavirus by postal code, the Arizona Republic reported, even though Native Americans are among the most affected by COVID-19, with 18% of the state’s recorded COVID-19 deaths where ethnicity was known. But ZIP codes with many Native residents are suppressed, the Republic said, and there have been errors in confirming the correct location for each case.

During his Wednesday news conference, Gov. Ducey held firm in withholding information concerning nursing homes and assisted living facilities. According to the Arizona Republic, the Q&A got combative as the governor and Dr. Cara Christ, director of the Health Services Department, refused to give any details about the matter unless required to by a judge. Nursing homes have been hit hard by the virus, but information from the state regarding the spread has been limited.

Unemployment benefits to expand, but experts say it may not be enough

State unemployment benefits are set to increase to accommodate for those who are not currently eligible for aid. Cronkite News spoke with a poverty advocacy group representative, Cynthia Zwick, who believes the added benefits will not be enough to make a large deficit. “Having to create an entirely new database system to manage this and still trying to serve folks is not a recipe for success,” she said.

How to help: ‘Adopt’ a graduating senior

Graduating high school seniors are being “adopted” by people who want to take some of the sting out of canceled proms, senior days and commencements. Grads are being sent gift baskets filled with goodies and at-home versions of these momentous occasions. If there’s a graduating student in your life, this could make a difference in theirs. If you’d like to adopt a high school grad but don’t know one, you can find one at this Facebook page.