Members of the Arizona National Guard deliver food to a food bank in Payson on Monday. Under orders from Gov. Doug Ducey, the National Guard is providing support to food banks and grocery stores during the coronavirus pandemic. (Photo courtesy of Tech. Sgt. Michael Matkin/U.S. Air National Guard)

PHOENIX – Nearly half of Americans live paycheck to paycheck, and 4 in 10 adults cannot afford to cover an unexpected $400 expense without borrowing or selling something – and the coronavirus pandemic has added to the burden for people living on the edge.

In Arizona, the COVID-19 crisis has triggered a surge of people applying for unemployment benefits as more companies lay off employees, leaving many Arizonans with no choice but to turn to food banks and homeless shelters.

“We’re in crisis mode right now,” said Greg Boone, chief development officer of Save the Family Foundation of Arizona, a Mesa nonprofit that provides housing and other services to low-income and homeless families.

“Think about your single mom with kids working at a call center and the call center lays off hundreds of employees,” Boone said. “Every one of those individuals are vulnerable – not being able to afford rent, food and other basic necessities. What are we doing as a community to help them?”

Although Washington and other states have suspended some social service programs or reduced their hours, several human services providers in Arizona, with some support from state emergency funds, are committed to keeping doors open to help those in need.

But the situation is as dynamic as the rapidly accelerating coronavirus pandemic, and it’s unclear how long some programs will be able to keep doors open with many losing financial support from fundraising. They are asking the community to help with donations and volunteers.

Gov. Doug Ducey on March 30 announced an initial $6.7 million to support Arizona food banks, nutrition programs and programs that serve people experiencing homelessness as part of the state’s $50 million COVID-19 relief package. Ducey said $5 million of the funds would assist with setting up temporary isolation and quarantine housing, as well as sanitation supplies and services for homeless shelters.

“We are adapting our campus daily to protect the health and safety of the men and women receiving services, including elderly and those with ongoing health challenges, and our incredible staff on the front lines every day,” Amy Schwabenlender, executive director of the Human Services Campus, said in the news release. “We are deeply grateful for Governor Ducey’s support in those efforts.”

Officials across the nation and in Arizona have said they’re concerned about funding for temporary isolation and quarantine housing for those experiencing homelessness. Such cities as Los Angeles and Seattle have grappled with outbreaks at homeless shelters, causing them to temporarily close and move clients to other shelters or hotels.

With more than 10,000 people experiencing homelessness throughout Arizona, shelters have seen an increase in people seeking services within the past few weeks, and shelter officials said they are adapting to rapid changes.

More than 6,000 of those homeless people live in Maricopa County, where officials are looking for permanent additional sites to place people who show symptoms of illnesses. However, no plans have been made public yet.

Flagstaff Shelter Services is the largest emergency shelter in northern Arizona, Altenbaugh said. As businesses and facilities temporarily close and jails release nonviolent offenders, she said, there has been a sharp increase in the need for shelter.

St. Mary’s Food Bank in Phoenix receives help from 50 soldiers from the National Guard who move food with forklifts and pallet jacks to get orders ready for the food bank’s more than 600 partnered agencies, according to a news release.

St. Mary’s typically serves more than 400 people a day, but on the morning of March 31, the day after Ducey issued a stay-at-home order, the nonprofit served more than 1,500 people, according to AZ Family.

ICM Food and Clothing Bank in Phoenix has temporarily suspended some of its services, including clothing banks, but is still working to provide food for those in need.

Food operations are changing daily for the food bank, which packs more than 200 boxes of food and serves more than 150 families each day.

“Figuring out how to best safely serve everybody coming in, that’s our main concern at this point,” said Beth Fiorenza, executive director of ICM.

She said her organization is seeing a lot of people who have been laid off or had work hours reduced, and because schools are closed and kids are home, resources are tight.

“I had one family and a neighbor come, they drove about 80 miles to get here because they do odd jobs and those jobs have been canceled,” Fiorenza said. “They were looking for additional resources that they didn’t have near them, so a lot of that is happening right now.”

She said people seeking food assistance come from a variety of backgrounds.

“We’re seeing not only low-income families, but we’re seeing everybody,” Fiorenza said. “There are folks that are coming to us that have never used a food pantry before. We’re seeing a lot of new clients.”

Human services providers use strict guidelines for sanitation and follow such recommendations as social distancing and frequent handwashing, screening for fever and using masks when feasible. Still, Altenbaugh said, people experiencing homelessness can’t social distance from one another or self-quarantine.

“Normally, our setup is bunk beds and people sleep however they want to sleep,” Altenbaugh said. “Now we’re making sure that folks are sleeping in the opposite direction, so we can have some of that distance happen there. But with 177 people in our space, it’s difficult to create a 6-foot-perimeter for people.” 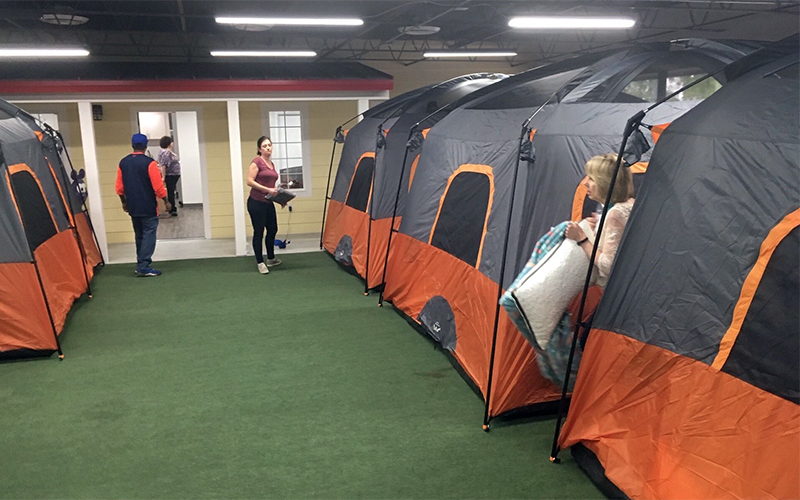 Family Promise, a nonprofit in Scottsdale that provides social services and emergency shelter through an interfaith network that includes churches and synagogues, has suspended its shelter, which would normally feed and house clients each night at a rotating location.

Ted Taylor, executive director of Family Promise, said the organization did not want to put its volunteers or clients at risk of spreading the novel coronavirus, which causes COVID-19.

“Instead, we moved all of our families into our existing day centers that were not designed for sleeping and we created sleeping capabilities there,” Taylor said. “We added bunk beds, blow up the mattresses. Now, instead of 185 volunteers, we have 10 staff members taking care of these families.”

In addition to housing 13 families on-site, the nonprofit opened a day care for children of its clients who have to continue to work, because Boys & Girls clubs and day cares have been suspended.

“Our clients know that we’re there for them, they know that they are safe,” Taylor said.

When clients enter Family Promise and Flagstaff Shelter for services, staff members ask them a series of questions to evaluate whether they have been exposed to COVID-19 or might be sick.

Flagstaff Shelter has taken over operation of a 123-room motel to isolate and quarantine individuals and families. Altenbaugh said she had to bring in additional staff to extend services at the motel.

“We really do believe that housing is health care and simply by not having a roof over your head you are more medically vulnerable than the average person,” Altenbaugh said.

The goal for the nonprofit is to have room for enough people to quarantine or isolate somewhere that isn’t the shelter or the ICU, if they don’t need to be hospitalized.

As an agency and community, Altenbaugh said keeping human dignity is important.

A homeless organization in Las Vegas gained national attention when it placed clients in a temporary shelter in a parking lot after one tested positive for COVID-19.

California and other states have placed people experiencing homelessness in vacant homes to survive the virus outbreak, and Connecticut has installed public handwashing stations in areas where there is pedestrian traffic.

In the past weeks, cities across the country have reported their first cases of COVID-19 among the homeless population, including one in San Francisco in which health officials don’t know how the virus was contracted.

California Gov. Gavin Newsom said 60,000 of the more than 150,000 people experiencing homelessness in the state could end up infected by the virus.

Health officials have said the population is “extremely vulnerable” to coronavirus because of underlying health conditions that can become deadly for people living on the streets, according to a New York Times article.

Stephanie Klasky-Gamer, president and CEO of LA Family Housing in Southern California, said in a webinar addressing homelessness that people who are living outside are at a far greater risk of contracting the novel coronavirus, which causes COVID-19.

“I think we almost lost three people a day living outdoors in Los Angeles who were dying on our streets having nothing to do with COVID-19,” she said. “They’re just at risk, their health is compromised because they live outside. It is pouring rain and I drove into my office this morning and there’s still poor people in a tent right outside my office.”

Needs rise but resources have dwindled

Altenbaugh and Taylor said the virus has affected their organizations’ finances because they’ve had to postpone major fundraising events. Both are seeking all resources that come available.

Although President Donald Trump extended social distancing recommendations until the end of April, and Dr. Anthony Fauci, the head of the National Institute of Allergy and Infectious Diseases, announced a vaccine could become available in a year to 18 months, Family Promise and other nonprofits said they can’t afford for the crisis to last for a year.

“We cannot afford, based on existing funding streams, to sustain this longer than maybe 90 to 120 days – longer than that can be devastating,” Taylor said.

As the needs increase for social services, Boone said Save the Family can’t afford to expand services.

“Our homeless shelters like UMOM will be inundated with an increased need. But they were already facing a two-to-three month wait list as is. It’s not a rosy picture,” he said.

A big concern for A New Leaf, a nonprofit in Mesa that provides housing and support services to low-income families and people experiencing homelessness, is that 120 days in an emergency shelter will not be enough to stabilize clients during the COVID-19 crisis, said Joe Dulin, chief philanthropy officer.

A New Leaf provides services to many low-income individuals who work two to three low wage jobs. Dulin said these are the people who will be most impacted by the pandemic.

Altenbaugh said the need has risen while resources have dwindled.

“This is a time when volunteerism is down and donations are down,” she said. “We have granters that are pushing back funding deadlines.”

Nonprofits across the U.S. have asked their communities for donations of money and such items as toilet paper, laundry detergent and protective personal equipment.