TEMPE – When Tucson Mayor Regina Romero ordered nonessential businesses in the city to close Saturday in an effort to halt the novel coronavirus, she could only urge barbershops and nail salons to go along.

That’s because those businesses were declared “essential services” last week by Gov. Doug Ducey, a designation that will continue under the statewide “stay-home” directive he issued Monday.

Lance Ryberg, who owns the 22nd Street Barber Shop, was one of the Tucson business owners who said he was still operating Monday because of the governor’s protection.

“It was very irresponsible of the mayor and it’s not the law and it’s not set down by Gov. Ducey,” Ryberg said Monday of Romero’s suggestion that businesses like his close. “We’re out here trying to help people on the frontlines while taking sanitary precautions.”

Several Tucson barbers and salons contacted Monday said they were taking precautions but still doing business, despite Romero’s order that “strongly advises” them to shut down because they “are not in fact critical or essential during this pandemic emergency.”

Romero on Monday called Ducey’s stay-home directive, which takes effect statewide at 5 p.m. Tuesday, a step in the right direction. But she repeated charges raised by her and other mayors that Ducey’s designation of “personal hygiene services” as essential services was a big loophole.

“I urge the Governor to take further action to narrow his list of ‘essential’ services to those that are truly critical to maintaining public health, safety, and community well-being,” Romero said in a statement released shortly after Ducey’s order.

That order is more of a policy statement that “promotes physical distancing, while also encouraging social connectedness.” While it says state residents “shall limit their time away from their place of residence,” it includes a number of exemptions, including trips to the grocery, to the pharmacy and for health care, among others.

It also specifically exempts trips to “utilize any services or products produced by essential businesses,” which include golf courses, laundries, barbers, salons and more named in his executive order last week.

Steve Dotson, owner of Tucson Laundry Centers on Pantano, said Monday that despite a sharp drop in business, the doors are still open because he is “committed to our employees, they are family.”

“We’re really just trying to keep with the regulations and recommendations given by the government, but we’re also doing everything we can to keep it open,” Dotson said Monday.

Precautions at his business include limiting the number of people in the store, suspending pickup and drop-off at retirement homes, letting customers use an app to pay for their laundry, and sanitizing machines.

Other Tucson businesses also said they are taking precaution to prevent the spread of the coronavirus, while trying to keep their doors open. 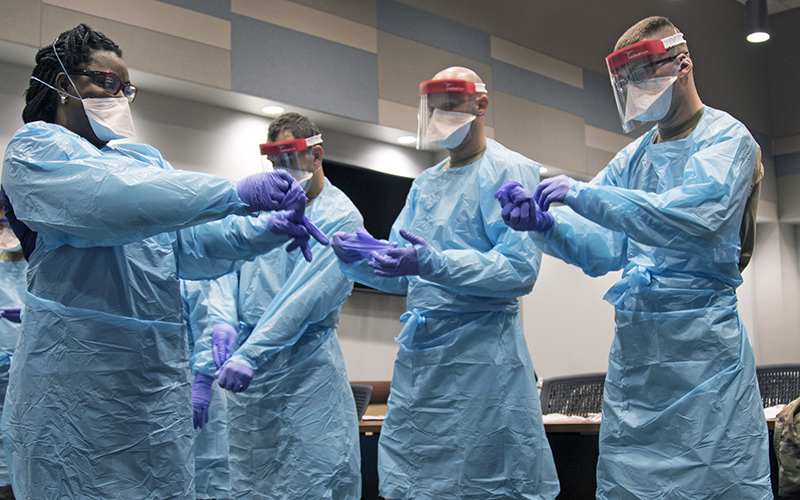 As COVID-19 cases rise, so do hospital workers' worries about equipment

Ann Tran, owner of Rex Hair and Nail Salon, said the salon is limiting business to one or two customers in the store at a time, with one chair in use, which is cleaned after each customer. Tran said the salon is not taking new customers, but only serving its regular clientele.

Ryberg said his barbershop has cut back on staff and given them the option not to work. But he said the demand is still there, saying he was flooded with calls from regular customers asking if the barbershop was still open after Romero’s announcement.

Although Ryberg called Romero’s order “total injustice” to small businesses, an adviser to the mayor said most Tucson businesses have been very cooperative and the city has received positive feedback.

“Most businesses in Tucson in general are very cooperative and even prior to the mayor’s order they took it upon themselves to do any part to prevent the spread,” said Nathan Sigal, the senior policy adviser to Romero.

While businesses have expressed concerns about the financial impact of closures, Sigal said the $2 trillion economic stimulus package passed last week in Washington should help businesses weather the storm.

Jamie Mendivil, owner of Sunny’s Barber Shop, said he had closed his Tucson business but was thinking about taking appointments again. But he was rethinking that plan Monday, as news about the coronavirus continued to shift.

“It seems like everything changes every day,” Mendivil said.