TUCSON – Microbiologist Charles Gerba, a battle-scarred virus veteran, earned the sobriquet “Dr. Germ” based on his experience and expertise in researching and eradicating germs.

He comes to the novel coronavirus crisis steeped in fighting such deadly viruses as Ebola and SARs, and he’s now using his microscope and petri dishes for a new challenge. While other scientists look for cures, vaccines and rapid-fire tests, he and colleagues at the University of Arizona are turning their attention elsewhere – the use of disinfectants to battle COVID-19, the deadly disease caused by the novel coronavirus.

As the virus has upended life around the world – closing schools and restaurants and emptying grocery store shelves – Gerba discussed how cultural differences can spread the virus, how some disinfectants work better than others, the magic of microfiber and whether an Arizona summer could slow or kill the coronavirus. This March 9 interview has been lightly edited for clarity.

A study by the University of Arizona found that the typical employee office desk has hundreds of times more bacteria per square inch than a toilet seat in the same building.

“From our studies, believe it not – tabletops, children’s desks at school, tables in a coffee break room … why? Because that’s where your hands are moving around, so that’s where we see the greatest exposure,” Gerba said.

Smartphones are not any better. Studies have found streptococcus and E. coli lurking on screens. The Centers for Disease Control and Prevention estimates 80% of all infections are transmitted by hands.

On average, Americans check their phone once every 12 minutes, meaning you come in contact with your phone screen at least 80 times a day, according to global tech protection company Asurion, giving microorganisms plenty of time to move from your fingers to your phone.

“Phones become germ mobile devices because you touch a surface, touch your phone, put it on your phone, put it in your pocket, you’ll take it back home, take the phone home and do it again,” Gerba said. “Basically, you’ve moved the virus from your phone to your home.”

Gerba recommends using an alcohol-based disinfecting wipe to clean both your case and phone at least once a day. Personally, he cleans his twice daily. To make it easier to remember and to complete, he suggests having cleaning supplies in the walkway of your home so you don’t spread the germs you brought home any further than the door.

Novel coronavirus is tenacious compared with Ebola and SARs

A study conducted by experts from the CDC, National Institutes of Health, UCLA and Princeton University investigated how long the SARS-CoV-2 virus remains infectious on a variety of surfaces: in droplets for as long as three hours, on copper as long as four hours, on cardboard as long as 24 hours and on plastic and stainless steel as long as three days.

According to the CDC, the Ebola virus “can survive on dry surfaces, like doorknobs and countertops, for several hours; in body fluids like blood, the virus can survive up to several days at room temperature.”

The CDC says proper cleaning and disinfecting is key to stopping the spread of the coronavirus.

“When you wipe a surface,” Gerba said, “people tend to let it dry and you have to have a certain amount of contact time to kill the viruses and bacteria.”

Gerba prefers pre-moistened disinfectant wipes because the disinfectant stays on the surface as it air dries, killing more germs and bacteria in the process. What’s so different about spraying and wiping? Gerba said spraying is close to doing nothing at all, if you don’t use the correct technique.

“Where there’s a will, there’s a way,” Gerba said. If someone only has access to a spray disinfectant, Gerba recommends letting it air dry to give the surface more contact time to kill germs. “If all else fails,” he said, washing the surface with plain soap and hot water can pick up and move the germs. However, the technique is not guaranteed to kill them, so when you’re done, either throw the rags away or wash them for 45 minutes in hot water.

Turn to microfiber when sanitizer and disinfectant wipes are sold out

Also, microfiber, unlike cotton, dries fast, making it hard for bacteria to grow and survive.

“Use a microfiber cloth if you can get them because they are better at attracting microorganisms from surfaces,” Gerba said. “But make sure if you do that, you wash your hands afterwards and take these cloths and put them in a washing machine with hot water. Dry them for at least 45 minutes because usually cloths are thick and they need those kinds of treatment to kill any microorganisms that might be in them.”

If cared for properly, the University of California’s study states, microfiber can be washed a thousand times before losing its effectiveness.

Scientific breakthroughs on COVID-19 will go beyond vaccines and tests

Scientists are rushing into battle to come up with tests, vaccines and, possibly, a cure. Gerba said disinfectants also are a powerful research weapon.

“These innovative technologies are really designed to cover large surfaces and to act over long periods of times, from hours, to days to weeks,” Gerba said, “and that’s a benefit because when you disinfect a surface, it can become recontaminated almost immediately, so you want some kind of barrier that continuously disinfects surfaces.”

According to a study published in the American Journal of Infection Control, an evaluation of continuous disinfectants in a clinical setting had lasting positive effects. The study tested the effects of disinfectants on bioburden, or the number of bacteria living on a surface that has not been sterilized, living on the rails of hospital patient’s beds.

“The persistent agent was found superior in its ability to limit the establishment of bioburden,” according to the study, which found that a continuous stream of disinfectants was key to controlling the spread of bacteria on surfaces.

Cultural mores, like kissing cheeks as a greeting, can spread the virus

According to the CDC, the coronavirus is mainly spread through respiratory droplets like from a cough, sneeze or any “close contact.”

“The coronavirus spreads mainly by sneezing and coughing and then getting to your nose someway; either inhaling it or it contaminates surfaces either with respiratory secretion or feces, potentially,” Gerba said. “Then, you touch a surface, you get it on your fingers, you bring your fingers to your mouth, nose or eyes.”

Because the virus is spread from person-to-person, the close contact that Italians have with one another accelerated the spread of the illness. According to the CDC, the practice of social distancing helps curb the person-to-person contact. The CDC recommends such tactics as increasing physical distance from other people, staggering work schedules to reduce contact and limiting any non-essential work travel and social gatherings of more than 10 people. 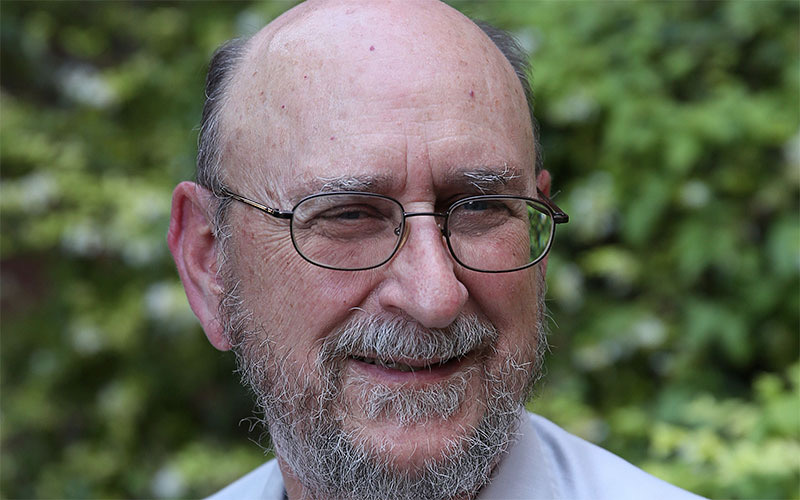 Microbiologist Charles Gerba calls smartphones “germ mobile devices because you touch a surface, touch your phone, put it on your phone, put it in your pocket, you’ll take it back home, take the phone home and do it again. Basically, you’ve moved the virus from your phone to your home.” (Photo by Jamie Landers/Cronkite News)

“Usually coronavirus season, if it’s like the common cold, ends in May, but we will see,” Gerba said.

The idea was supported by President Donald Trump, who, in a Feb. 10 White House meeting with state governors, said, “It looks like by April, you know in theory, when it gets a little warmer, (the novel coronavirus) miraculously goes away – I hope that’s true.” Some scientists have said that the novel coronavirus is acting in lethal and unknown ways, so counting on warm weather to stop it is based on hope rather than hard data.

According to a Harvard University study, influenza and similar viruses survive longer in regions with winter seasons because such factors as cold and dry air give it longevity – increasing the chances of infecting more people. However, according to the World Health Organization, the novel coronavirus doesn’t die until it reaches 132 degrees Fahrenheit.

Although Arizona summer temperatures in the low 100s won’t kill the virus, a new study published by researchers in Beijing found that the heat inhibited its ability to infect people.

Gerba launched his understanding of how germs work and how best to avoid them decades ago.

The idea to study toilets originated in 1974. Gerba was working at Baylor College of Medicine where he would spend two years repeating one cycle: contaminate a toilet bowl with E. coli, cover it with gauze, then flush and squeeze the gauze to remove the organisms for further testing.

“Believe or not, I used to put viruses in a toilet and flush it and I looked at where they settled out in the restroom,” Gerba said. “You don’t want to keep your toothbrush any closer than three feet, otherwise you’re going to brush your teeth with what was in the toilet.”