Senate Majority Leader Mitch McConnell, in a 2018 file photo, and other Republicans accused Democrats of playing politics with an economic stimulus package aimed at coronavirus and using it as a liberal wish list. (Photo by Lillian Donahue/Cronkite News) 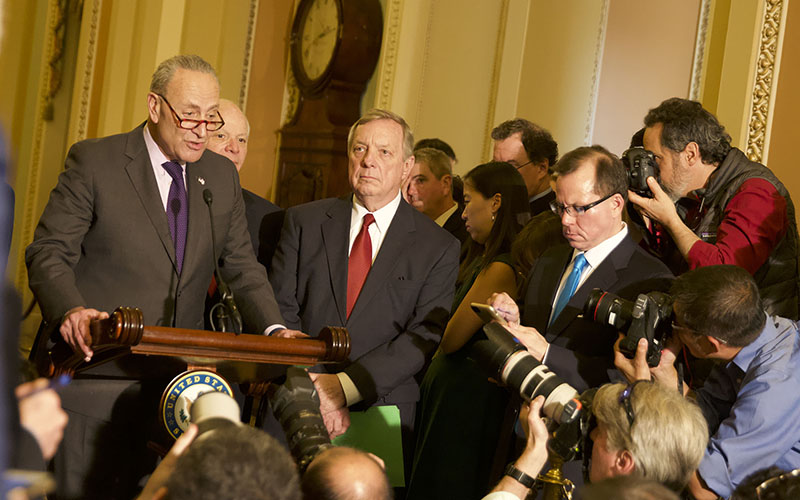 Senate Minority Leader Chuck Schumer, left, in a 2017 file photo, and Senate Democrats said Republicans are trying to rush through an economic stimulus bill with too much for big business and no checks on how the money is spent. (Photo by Andrew Nicla/Cronkite News)

WASHINGTON – The Senate deadlocked for a second day Monday on more than $1 trillion in proposed support for an economy buffeted by coronavirus, as Democrats said the bill gives too much to corporations and Republicans accuse Democrats of making it a liberal wish list.

A procedural vote to cut off debate on the measure, which needed 60 votes to pass, instead failed 49-46 on a straight party-line vote, with all Republicans who were present voting for it and all Democrats opposed.

Senate Majority Leader Mitch McConnell, R-Ky., said there would not be another vote before Tuesday at the earliest, and senators were still talking on the floor Monday night as negotiations continued.

The latest version of the bill reportedly includes a direct $1,200 for every taxpayer, up to $350 billion in loans for businesses with fewer than 500 employees, and as much as $500 billion for large businesses, including targeted aid of billions toward airlines, among other provisions.

“Senate Republicans have really been pushing for $500 billion with some specific amounts going to certain favorite industries for airlines,” said Ryan Bourne, an economist at the Cato Institute.

But Democrats have said there are not enough controls on how that money could be spent, creating what they have called a “slush fund” where, in Bourne’s words, “the Treasury can pick and choose who is deserving of relief.”

He said opponents are worried the bill “would end up with (Treasury Secretary) Steve Mnuchin throwing money at certain favorite sectors like oil, hotels and ships.”

Democrats are also pushing for guarantees that any relief funds go to workers as opposed to executive pay or stock buybacks.

Republicans on Monday accused the Democrats of playing politics with the bill, which they said they had already granted substantial concessions on. But Democrats countered that they had been left out of some negotiations and the GOP leadership was trying to rush through a bill that would have little chance in the Democrat-controlled House.

“We only just received this bill and it will not pass the House,” Sinema said in a statement after the first failed vote on the bill, on Sunday. “There is no time for partisan games.”

But McSally said in a tweet that no senator should get a paycheck if they cannot come together and approve a stimulus package.

Bourne said that one thing that both parties have agreed on is the need for an increase in unemployment insurance. He said current proposals call for “an extra emergency payment … which will be fully funded by the federal government, with an expansion of the number of weeks for people to be eligible for unemployment insurance.”

Senate Minority Leader Chuck Schumer, D-N.Y., said on the floor Monday that the bill “has moved in a direction we’ve outlined” on unemployment insurance.

“The original bill had the unexpanded employment benefits last only three months, we need to make it longer because the dislocation caused by this crisis will not be over in 90 days and people who lose their jobs need help,” Schumer said.

Five Republican senators were not present, at least three of whom were staying away out of concerns over the coronavirus. Sen. Rand Paul, R-Ky., said he is under quarantine after testing positive for COVID-19 while Utah Sens. Mitt Romney and Mike Lee, both Republicans, were self-quarantining after close contact with Paul.

Bourne said if the bill included more flexibility for households and working families “relative to the amount that Republicans want to be sent to large businesses,” and more controls on how corporations can spend the funds, then Democrats would likely vote for it.

Despite the challenges in pushing a bill through the Senate, Bourne said he thinks a package will have to be passed eventually, as markets have been in a freefall in recent weeks and higher unemployment is looming. But even if they agree on a stimulus bill, Bourne said the bigger challenge remains the underlying health issue.

“You can provide all the relief you like, but people aren’t going to start going out to restaurants again, in meaningful numbers or start getting using airlines again, or anything else until the public health issue is dealt with in some way,” he said.