PHOENIX – Ella Johnston was a 13-year-old cheerleader when she suffered a concussion during practice that was so severe she needed speech, occupational and physical therapy.

Months later, she returned to the mat while still working on her recovery – underlining the dangers and the joys of cheerleading.

“It’s such a high leading moment. You just want to show off all of your tricks and skills,” she said.

The American Academy of Pediatrics in November identified cheerleading as having one of the highest rates of concussions during practices, second to boy’s football. Football’s connection to concussions has been established for several years, and medical experts have been studying concussions in domestic violence victims.

But experts say reducing concussions in cheerleaders nationally has been sporadic, given the inconsistency across states over how it is classified: as an activity or a sport. Some studies have shown that some institutions do not consider cheerleading, with its jumps, tosses and other physical moves, to be a sport, which shortchanges safety protocols to avoid injuries like concussions – such as practicing in a hallway or on asphalt rather than a safer environment.

“Unfortunately, not all states recognize cheerleading as a sport – which may impact the conditions in which cheer squads may practice,” the author of the study, Avinash Chandran, told Newsweek magazine in an article about the findings.

And a Sports Journal study advocated for the acceptance of cheerleading as a sport so that its athletes may benefit from the same resources that other sports receive and inclusion in concussion management and education protocols.

“Although competitive cheerleading has been recognized as a sport, cheerleading as a whole has not, putting its athletes at risk as its participants are not included in these safety programs,” the Journal study said. “If considered a sport, cheerleading would be afforded the same benefits as other sports, including resources for better facilities, mandatory concussion education… baseline neurocognitive testing, and inclusion in injury surveillance systems.” 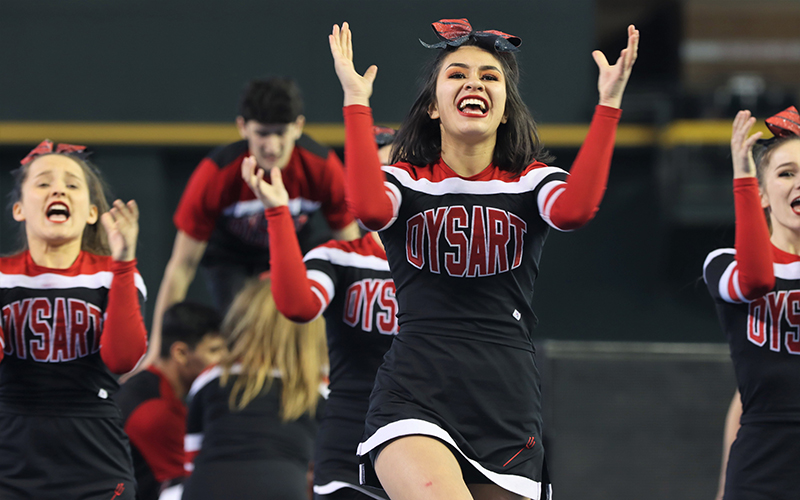 Dysart High School cheerleader Samantha Ybarra at the 2020 AIA Spiritline Championships in Phoenix, Arizona. Cheerleading has the highest rate of concussions during high school practices, according to the American Academy of Pediatrics. (Photo by Reno Del Toro/Cronkite News)

“All the protocols and safety measures that we institute in other sports like football should also be instituted in cheerleading if they aren’t already,” said Dr. Javier Cardenas, director of the Barrow Concussion and Brain Injury Center in Phoenix. “Thank goodness, they’re already instituted in Arizona.”

The Arizona Interscholastic Association requires every participating school must have a concussion policy that addresses three components: concussion education, removal from play and return to play.

But cheerleading continues after high school. Cardenas said the risk of injury in college is five times higher than in high school.

“You see more men participate in the college level than in the high school level. They tend to throw the athletes higher. That’s where we see the most head injuries,” he said.

Cardenas said that one of the ways to reduce the amount of concussions and head-related injuries in cheerleading is to limit practice times.

“What’s really important to preventing these injuries is making sure these practices are not extended because what happens is that all of the athletes get fatigued, weak and that’s when accidents happen.”

Johnston, who has been cheerleading since the fifth grade, and returned to practice in August, said the road to recovery is long.

“Physical therapy, speech therapy and occupational therapy were very tiring, but they helped a lot,” she said.

Cardenas said drastic mood changes are one effect of a concussion, and Johnson said she experienced some emotional changes.

“I’m usually a happy and perky person,” she said. “I was just tired and didn’t want to do anything.”

Now 14, she started to feel her usual, more upbeat self within weeks, which reassured her and her family.