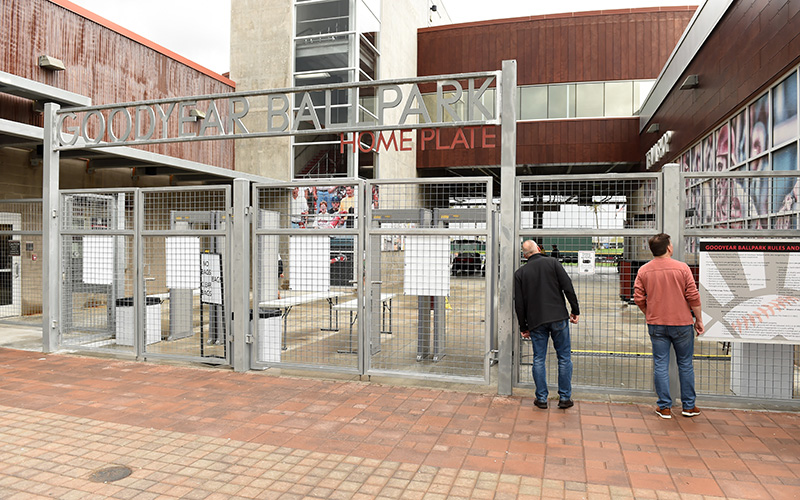 A employee who worked for the Cincinnati Reds at Goodyear Ballpark during spring training tested positive for the novel coronavirus. (Photo by Norm Hall/Getty Images)

PHOENIX – The worldwide COVID-19 pandemic continues to have a significant, far-reaching impact on sports, including baseball.

The Cincinnati Reds announced Wednesday that one of the team’s employees who worked at the spring training facility in Goodyear has tested positive for COVID-19, which is caused by the novel coronavirus. The employee worked at the complex from Feb. 29 through March 14, the team said.

The employee lives in Arizona and has been self-quarantined, the team said. Additionally, the Reds are testing other staffers who may have had close contact with this employee, and have ordered them to self-quarantine.

This adds another confirmed case to Arizona as a whole. The Arizona Department of Health Services announced Wednesday morning that the total number of cases in-state had jumped to 27, but this figure reportedly did not include the Reds’ employee.

The Arizona Diamondbacks – along with the Colorado Rockies – faced the Reds in split squad contests March 10. It was the final game Cincinnati played before spring training was suspended.

D-backs general manager Mike Hazen does not believe there should be any concern for the health of his team’s players or employees, saying it doesn’t seem there was any interaction with the affected Reds staffer.

“I have not been notified that there would be concern in terms of that,” Hazen said Wednesday in a conference call. “I don’t believe they’ve had any contact. As you know there, it’s kind of separated from the complex … at this point I have not heard anything substantive.”

The Diamondbacks have already tested one minor league player for coronavirus as a precautionary measure, and the result was negative. As of Wednesday afternoon, they “have not conducted any other tests,” Hazen said.

“Every conversation I’ve had with another (general manager) in the last 10-14 days has been strictly around player health, safety, pressing topics in terms of logistics,” Hazen said. “There have been no baseball-related conversations.”

With spring training officially postponed and Opening Day delayed, Major League Baseball will have to mull the possibility of a shortened, or even postponed, season once greater public health is no longer a serious worry.