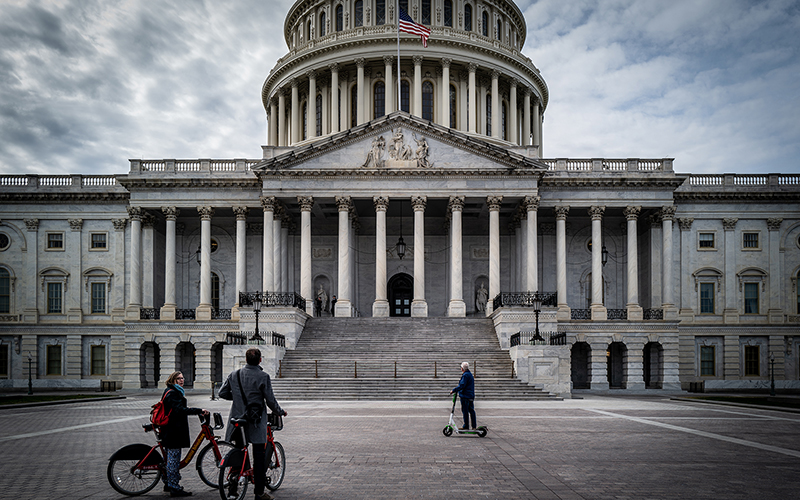 Tourists pause outside the Capitol – which was closed to tours last week because of coronavirus concerns – on Saturday, just hours after the House passed a bill to expand funding for nutritional programs and virus testing and would guarantee two weeks’ paid leave for affected workers. That last element has business groups upset. (Photo by Phil Roeder/Creative Commons)

WASHINGTON – Business leaders pushed back Monday against a coronavirus relief bill the House passed over the weekend that calls for extended sick leave, as well as new funding for testing, school lunches, senior nutrition and more.

The Families First Coronavirus Response Act passed the House early Saturday on a 363-40 vote, but was quickly attacked by small-business groups that called the paid leave requirement “extremely onerous” and potentially ruinous for some businesses.

The bill passed shortly before 1 a.m. Saturday, following days of negotiations between House leaders and the White House. It came less than a week after Congress passed and President Donald Trump signed a bill directing $8.3 billion in emergency funding to medical research and response to the coronavirus pandemic.

The bill still needs approval in the Senate, but leaders there said they could try to take the measure up on Tuesday.

The 124-page bill that opponents charge was rushed through late last week, includes $1 billion for various nutritional programs for children and seniors, to help people who may have lost income because they were forced to stay home from work for COVID-19. It also gives states flexibility to help families whose children get free or reduced-price meals at school that they could miss when schools are closed.

There are also funds to pay for coronavirus testing and to support state unemployment benefit funds that might be stretched by claims from people forced to stay away from work. And it relaxes work requirements for people on the Supplemental Nutrition Assistance Program, or food stamps.

But the most controversial provision is the one that requires businesses of fewer than 500 workers to provide up to two weeks of full-time leave if they are diagnosed with coronavirus or have to care for a relative with the disease or care for a child whose school closed. The worker would be entitled to another 10 weeks of pay at two-thirds their normal salary.

Chad Heinrich, Arizona state director of the National Federation of Independent Business, said small businesses in the state are “strongly opposed” to the leave provision, noting that it would not apply to businesses with 500 or more employees. For businesses with 50 employees or less, the requirement has the potential to bankrupt them, he said.

He said small business owners are not equipped to administer paid leave programs and that it is costly for a business to keep its doors open while also providing employees with paid leave.

“If you look at a restaurant owner, you may have liquid cash to keep you open for two weeks if you don’t have customers,” Heinrich said. “Could you imagine if you not only had to experience your customers not coming in the door but at the same time, you had to make paid leave to your employees?”

But a spokesman for the Arizona Chamber of Commerce said it was glad to see Congress and the White House moving quickly on the issue, although additional legislation will likely be required to address payroll, tax delays, small business loans and credit programs to “address potential supply chain disruptions.”

Arizona Republican Reps. Debbie Lesko of Peoria and Andy Biggs of Gilbert were among the 40 lawmakers, all Republicans, who voted against the latest measure in the House.

Lesko said she voted against the bill because of “the combination of not having any time to read it or review it and being rushed through the middle of the night, and there being concerns from small businesses that it was going to ruin them.”

She said she got the bill at approximately 12:06 a.m. Saturday and was told she needed to vote on it at 12:25 a.m., while hearing reports on the floor that small business associations were opposed to the bill.

“In a short time, I had to decide how I was going to vote for it not knowing what was in it and that it exempted large businesses from the mandate to have paid leave, and only had a mandate on small businesses,” Lesko said. Had the concerns of small businesses been addressed, she said, she would have voted for the bill.

But Rep. Tom O’Halleran, D-Sedona, voted in favor of the bill that he called”the first of a number of bills that we’re going to have to work through in order to stabilize the country during this time.” Those who voted against the bill, he said, “obviously have a different take on how we have to move forward as a country.”

O’Halleran praised the bill for addressing “the ability of businesses to get tax credits instead of waiting for the government to set up an elaborate operation of how this occurs” and hopes that “businesses are able to bounce back after this.”

Arizona Reps. Ann Kirkpatrick, D-Tucson, Raul Grijalva, D-Tucson, and Paul Gosar, R-Prescott, were not present and did not vote Saturday. But Kirkpatrick, who closed her D.C. office Friday morning “out of an abundance of caution,” said in a statement that “we are dealing with a global pandemic that demands immediate action” and she is proud of her colleagues who voted for the bill

O’Halleran said the main issue is to “make sure those that are impacted by this and our country are able to manage this in short term and respond quickly as things start to turn in a positive direction in getting businesses up and stabilized.”