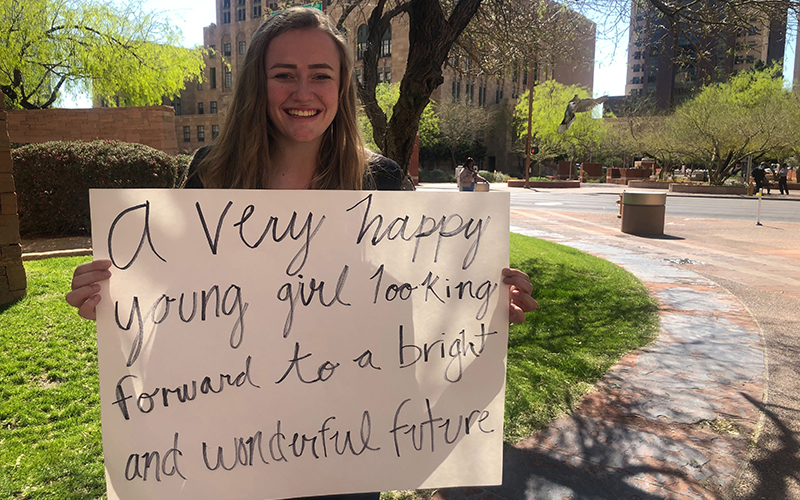 Sydney Perkins, 18, was one of more than a dozen people who gathered outside Phoenix City Hall to ask officials to declare a climate emergency. (Photo by Madison Staten/ Cronkite News)

PHOENIX — Meet Claire Nelson, one of several activists who gathered Monday in front of City Hall to call on city officials to declare a climate emergency.

A fulltime climate activist, Nelson switched to taking all online classes to focus on her work. That’s why instead of sitting in front of a computer screen, she’s standing at a lectern, representing Arizona Youth Climate Strike and acting as master of ceremony for the event.

“We’ve seen that the city of Phoenix hasn’t been taking adequate action on climate change,” she said. “And this is a crisis and it’s affecting our young people and our vulnerable communities.”

Nelson introduced many voices that have an interest in adapting to a warmer, drier climate. More than 10 Arizona organizations endorse the proposal, including the Sierra Club’s Grand Canyon Chapter, Tiger Mountain Foundation and Extinction Rebellion.

The groups came together to draw attention to specific reasons a climate emergency should be declared – citing a rise in heat related deaths, the increasing severity of wildfires and air pollution, and the increased focus on commercial and residential development as among the reasons.

“The proposal entails first of all, declaring a climate emergency,” said Jean Boucher, an environmental researcher at Arizona State University and member of Extinction Rebellion who was at the protest. “So you can imagine if your house is on fire, the first thing you want to do is let everybody know, ‘Hey, fire, the house is on fire.’ And then after that, what are the appropriate actions?”

The push to declare a climate emergency in Phoenix comes on the heels of a similar effort in Flagstaff this year. The City Council is considering passing a resolution later this month after residents petitioned the city. It would establish the goal of making the city carbon neutral by 2030 and would revise the goals of the Flagstaff Climate Action and Adaptation Plan to sync with the U.N. report on global carbon emissions, which scientists say is driving climate change.

For Sandy Bahr of the Sierra Club, the appropriate actions will be determined in conjunction with Phoenix, the fifth largest city in the nation and among the fastest growing. She hopes to meet with city officials this month.

“A lot of it has to do with doing more sooner, and making sure that what’s in the plans is actually reflected in the budget that they (Phoenix) put together,” Bahr said. “Because that’s often where we see action on many issues, including climate, fall down is that they put together a plan or they sign a resolution, but then they don’t reflect the actions that are needed in the budget.”

Phoenix officials have invited the Sierra Club to meet with them to discuss the issue. They point to their heat mitigation programs, and the city’s recent induction into the global C40 Cities Network as concrete action they have taken toward meeting sustainability goals set for 2050.

“Climate change, and a warming planet, threatens public health, infrastructure, and our economy,” Mayor Kate Gallego, told Cronkite News in a statement. “Issues of extreme heat and poor air quality – if unaddressed – will have severe repercussions and hinder our city’s continued success. The city of Phoenix is fully committed to addressing this challenge head on.”

In the meantime, Nelson will continue her efforts going with the Youth Climate Strike, and she implores others to get involved.

“There are a whole bunch of amazing climate organizations,” Nelson said. “The first step would be to follow us on social media. … We can usually direct you to any environmental organization that would fit you best or that you want to work with. There are plenty of ways to get involved.”