Witnesses wait for House hearing on the impact that a Supreme Court ruling on online sales tax has had on small businesses. From right, they are Linda Lester, vice president of K-Log Inc., Kevin Mahoney, president and founder of FindTape and Brad Scott, finance director for Prescott-based Halstead Beads Inc. (Photo by Jessica Myers/Cronkite News)

WASHINGTON – Prescott businessman Brad Scott told lawmakers Tuesday that a Supreme Court ruling that was supposed to help small businesses compete against online retailers is instead threatening to drive small firms like his out of business.

“Nothing has shaken us like Wayfair,” said Scott, adding that he and his wife have thought about closing Halstead Bead Inc., their 27-employee business.

Scott was one of several small business officials testifying to a House subcommittee on the impact of South Dakota v. Wayfair, a court ruling that said states could collect sales tax on goods sold in their states by online retailers.

But while one witness compared the ruling to “taxation without representation,” others said it merely makes online retailers pay the same sales taxes that brick-and-mortar stores have always had to pay. The old system was also costing states sales tax revenue, with South Dakota alone estimating it lost $48 million to $58 million a year.

“We’re very happy that the Supreme Court has finally leveled the playing field,” said Craig Shearman, a spokesman for the National Retail Federation, said of the court’s June 2018 ruling.

“This court ruling came about partly because the small businesses were concerned about unfair competition from large national online sellers who were, basically able to undercut them on pricing because they didn’t have to collect sales tax on their online sales,” Shearman said.

The June 2018 Wayfair ruling upheld a South Dakota law that requires a business to pay sales tax if it makes more than $100,000 or 200 transactions in a year in the state, whether or not it has a physical presence in the state.

Arizona approved a law last year to levy sales taxes on “remote sellers and marketplace facilitators” that did more than $200,000 in sales in the state in 2019, with the threshold dropping to $150,000 this year and $100,000 next year and beyond.

“It’s incredibly stressful to open up your mail and see a stack of letters from a state you have no real presence in,” said Mahoney, whose company is based in New Jersey. 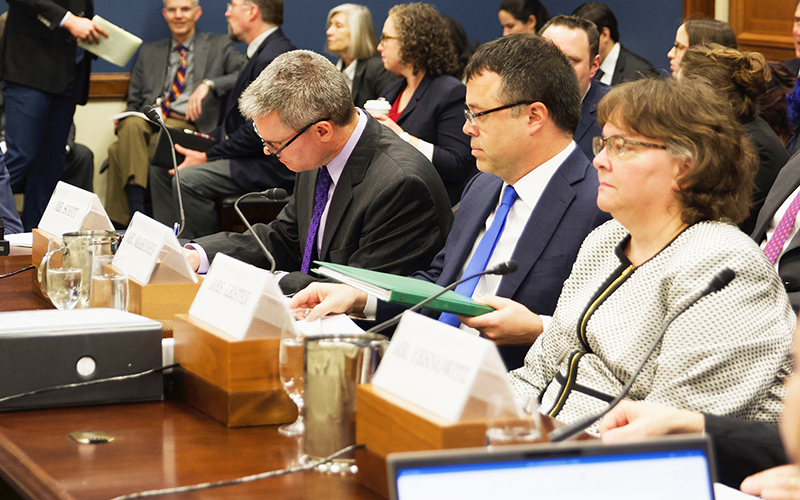 Brad Scott, left, is finance director for Prescott-based Halstead Beads Inc. He said the cost of keeping track of 32 different state sales tax laws is often $2 to $3 for every $1 in taxes he collects. (Photo by Jessica Myers/Cronkite News)

Currently, 45 states and the District of Columbia levy sales taxes. Tax rates differ by state, many of which have local sales taxes that further complicate the situation. Scott said that online small businesses like his have seen all of the pain and none of the benefit from the ruling.

“State sales tax laws are complex, and none are identical,” Scott said in his written testimony for a House Small Business subcommittee. “There is no single resource that instructs on all 51 departments of revenue; there are 51 playbooks that we must learn. This is an impossible task.”

Scott, who has to figure taxes for 32 states he sells in, said the bookkeeping is so complex that it costs him $2.31 to collect every $1 of tax that he sends back to the states. He testified that his business has struggled to keep up with the “same compliance expectations” as a company like Wayfair Inc. that he said is 1,100 times larger than Halstead Bead.

But Shearman said there are resources like Streamlined Sales Tax Governing Board Inc. that can help make life easier for small businesses. It has helped develop software that “calculates the tax that’s owed automatically and then periodically also submits those tax payments to the appropriate state automatically,” he said.

Scott said such software is needed, but is “far from a complete solution.”

“We want uniformity and simplicity across the states,” he said after the hearing.

He pointed to resolutions passed unanimously last month by the Arizona House and Senate that call on Congress to enact “uniform national legislation to simplify sales tax or similar tax collection to reduce the burden of tax compliance on remote sellers” in light of the Wayfair ruling. Other solutions could include state tax uniformity, a single tax-filing point and a break on taxes on wholesale businesses like his.

“That would be tremendously beneficial to manufacturers, distributors, wholesalers, that don’t really deal in the retail world,” he said.

Scott’s business was founded by his wife’s parents in the early 1970s, and grew from selling jewelry pieces to wholesale jewelry parts – from sterling silver chains to charms. The Prescott-based business, which has 27 employees, does 94% of its business online – but Scott said the burden of paying taxes to 32 states has led him and his wife to think about shutting down.

“We could lose everything,” he said in his testimony Tuesday.