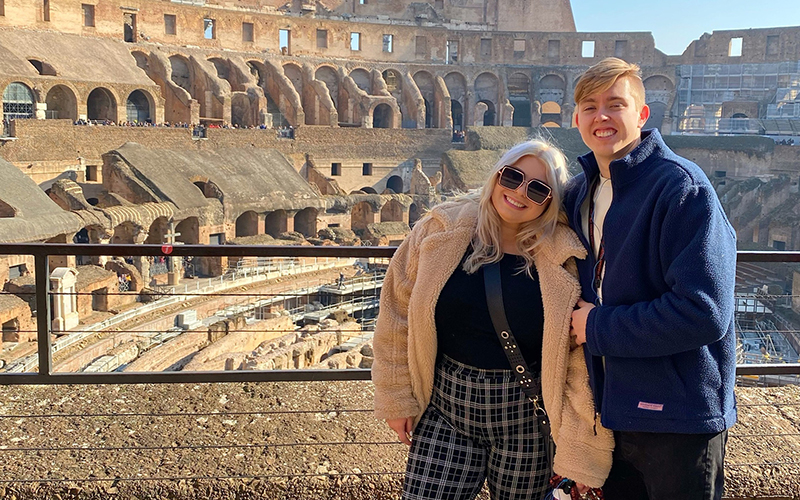 Arizona State University juniors Jillian Schreck and Rhodes Kirkpatrick at the Colosseum in Rome where they were studying this spring, before COVID-19 canceled the university’s study-abroad classes in Italy, China and South Korea. (Photo courtesy Jillian Schreck)

WASHINGTON – It was 3 a.m. Saturday when Arizona State University study-abroad student Jillian Schreck got the email: Leave Italy as soon as possible due to concerns surrounding the coronavirus.

“Everyone here is heartbroken,” Schreck said Tuesday. “Everyone has just been packing and sobbing.”

Universities across the state are scrambling to bring students home from study abroad programs in countries with a high number of cases of COVID-19, the flu-like disease caused by the novel coronavirus.

The University of Arizona canceled its two programs in Italy this spring as well as summer programs in South Korea and China. The students in Italy are expected home by Saturday, university officials said.˜

Northern Arizona University said in a statement Monday it will bring home its students currently studying in Italy, South Korea and China.

ASU on Jan. 29 canceled its programs in China and told students there to fly home immediately. It added the programs in Italy and South Korea on Friday.

The China and South Korea programs were canceled through summer, and the Italy courses through the spring, based on travel advisories from the Centers for Disease Control and Prevention.

The process has not always been smooth. One ASU student who was in Taiwan when the advisory was sent out, was not able to return to the mainland to collect the rest of her belongings.

Schreck said that she has received confusing communications from the university since the first email.

“No one knows what’s going on,” said Schreck, who said her parents have had long phone calls with various ASU departments.

Schreck, a junior majoring in science of health care delivery, was one of five ASU students at the American University of Rome this semester. The change has scrambled her schedule, she said, and some of the classes she could take for her major in the second half of this semester are already full.

She said she was told ASU will help cover costs for flights out of Italy, and the organization through which ASU students go abroad, International Studies Abroad, will reimburse student for money spent on excursions. But students will not get refunds on housing or tuition paid to the American University of Rome, Schreck said.

She said ASU offered to house returning students at Rise on Apache, a university apartment building next to the Tempe campus, but she is frustrated by what she sees as a lack of communication by the university.

“Why are we being punished? We worked too hard,” Schreck said.

International Studies Abroad did respond to a request for comment, and ASU directed questions to a frequently asked questions page.

That page says the university will “explore all viable alternatives” before canceling a program, and “will do its best” to refund students for study abroad expenses, but that there are no guarantees.

“ASU will not be responsible for any personal expenses or losses incurred as a result of program cancelation (including, but not limited to, airfare, passport and visa fees),” the site says.

A man identified only as a member of the ASU community was the first confirmed case of COVID-19 in Arizona. He was released from quarantine in late February, “fully recovered and reintegrated into a regular routine,” a university statement said.

There were 60 confirmed COVID-19 cases in 12 U.S. states as of Tuesday, the CDC said. Six U.S. deaths have been recorded so far, all in Washington state.

Globally, nearly 91,000 cases had been recorded, with more than 3,000 deaths as of Tuesday, according to the World Health Organization. The vast majority of cases and deaths have been in China, where the disease was first reported.

Schreck said she went to her final class in Italy Tuesday – art therapy, her favorite – to say goodbye. She plans to finish what courses she can online, though not all are offered.

While she said most of the other ASU students plan to return home, Schreck said the advisory from the university did not say she had to come back to Arizona, it just told students to leave Italy. So she’s flying to Portugal with her boyfriend, who was studying in Rome with her.

She and her boyfriend plan to take the time to travel through Portugal, Spain, Amsterdam and elsewhere in Europe before returning to Arizona.

“We’re trying to stay here through mid-April and make the most of our trip,” she said.