Tohono O’odham Chairman Ned Norris Jr. teared up at one point as he testified how blasting of sites for border wall construction has “totally destroyed” and “forever damaged” his people.(Photo by Jessica Myers/Cronkite News) 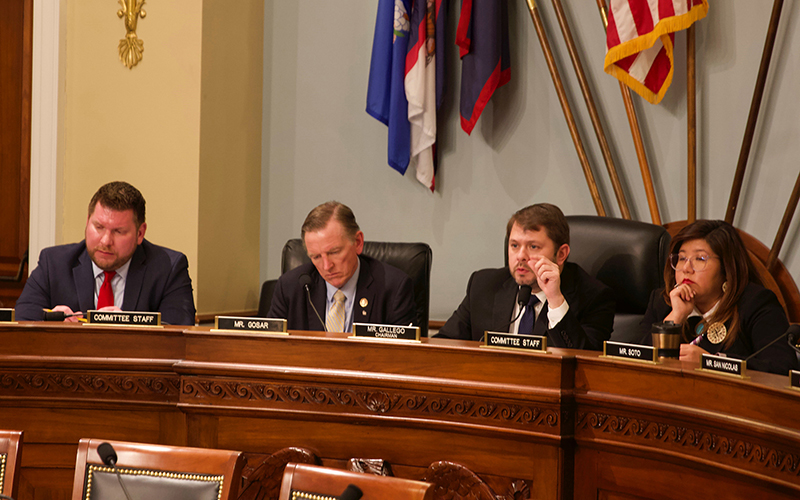 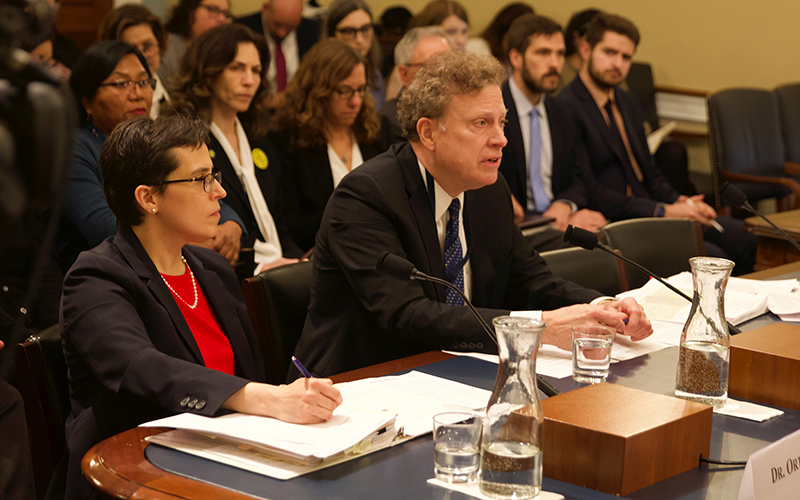 WASHINGTON – An emotional Tohono O’odham Nation chairman told lawmakers Wednesday that blasting on sacred sites in national monuments to build a border wall near his reservation has “forever damaged our people.”

“I know in my heart and what our elders have told us and what we have learned that that area is home to our ancestors,” said Chairman Ned Norris Jr., pausing to compose himself as he tried to hold back tears. “And by blasting, and doing what we saw today, has totally disturbed, totally forever damaged our people.”

Norris was one of six witnesses testifying at a House Natural Resources subcommittee looking into damage caused by contractors as they build a stretch of border wall through Organ Pipe Cactus National Monument, which stretches along the border and abuts the Tohono O’odham Nation.

Recent controlled blasting has included Monument Hill, which officials say is the final resting place of Apache warriors defeated by the Tohono O’odham, and which environmentalists say is home to two endangered species.

Democrats made their opinion clear with the title of the hearing, to investigate “destroying sacred sites and erasing tribal culture” to build the wall.

Rep. Ruben Gallego, D-Phoenix, called the government’s actions “reckless” and “harmful,” and said the demolition has been done “without any kind of meaningful tribal consultation … without advanced notice.”

“This administration apparently has no shame for the damages it has caused to tribal burial grounds,” Gallego said at the hearing. “This is the Tohono O’odham Nation equivalent to bulldozing through parts of Arlington National Cemetery.”

But Rep. Paul Gosar, R-Prescott, said that a wall would stop illegal border crossings that he said pose an “overwhelming destructive activity” to areas around the border.

“Trash, feces, water pollution … illegal vehicle transit,” Gosar said. “All this damage, all this destruction as a result of illegal trafficking has left deep scars” on the environment.

“I get it, you don’t want the wall. You don’t want to work with the Trump administration,” he said. “But you offer no alternatives.”

That theme was echoed by Scott Cameron, principal deputy assistant Interior secretary for policy, management and budget, who testified that the situation at the border “threatens core national security interests and constitutes a national emergency.”

“Along this border, cultural resources, wilderness areas, wildlife refuges, plants and animals are adversely impacted by land degradation and destruction from trails, trash, fires and other activities related to unlawful border crossings,” he said in his prepared testimony.

Cameron said that in the last three years at Organ Pipe alone, National Park Service rangers have arrested 71 people, stopped 1,231 border crossers and found 7,563 pounds of marijuana. Since 2010, he said, Park Service staff have found the remains of 184 people.

“Construction of border barriers will reduce or eliminate impacts from illegal entry and will help us maintain the character of these lands and resources under the department’s management that may otherwise be lost,” Cameron said.

He said that if there aren’t “illegal vehicles driving willy-nilly over an area,” they won’t be disturbing protected sites or “running over endangered desert tortoises.”

But critics said that comes at a cost of disruption of sacred burial and ceremonial sites. And that destruction often comes “without any consultation, without any respect and without following the constitutional mandate that you need to talk nation to nation” to affected tribes, said Rep. Raul Grijalva, D-Tucson.

His district includes much of the southern border as well as the Tohono O’odham Nation. which is in Mexico and the U.S., divided by 62 miles of border.

Norris said his tribe is sensitive to border issues, having spent “an annual average of $3 million of our own tribal funds on border security and enforcement to help meet the United States’ border security responsibilities. The Nation’s police force typically spends more than a third of its time on border issues.”

But the nation strongly opposes border wall construction, he said, not only because it’s costly, but also because it is “highly destructive to the religious, cultural and environmental resources on which our members rely and which make our ancestral lands sacred to our people.”

Norris said the tribe is rarely given advance notice of work on potentially sensitive sites, citing one time when he was notified by email the same day that blasting was set to occur on land that is the final resting place for many of his tribe’s ancestors.

Last year, archaeologists found bone fragments during an archaeological survey near Quitobaquito Springs, two of which were later determined to be human. Cameron said the Park Service is working to “repatriate the bone fragments to the Tohono O’odham Nation.”

Those answers, and the insistence by Gosar and Cameron that a wall would help protect sites in the area, did little to placate Rep. Deb Haaland, D-N.M. As one of two Native American women in Congress, she said it is her duty to stand up against “shameful” and “immoral” actions against indigenous people.

Trash can be cleaned up, Haaland said, but “a sacred site that’s been blasted cannot be whole again.”

“I don’t know how any of you sleep at night,” she said.