The Army Corps of Engineers installs border fencing near Yuma in September, construction funded in part by $3.6 billion shifted from the Pentagon construction projects last year. The administration now wants to divert another $3.8 billion, this time from jets and other hardware and from the National Guard. (Photo by Vincent Mouzon/Army Corp of Engineers) 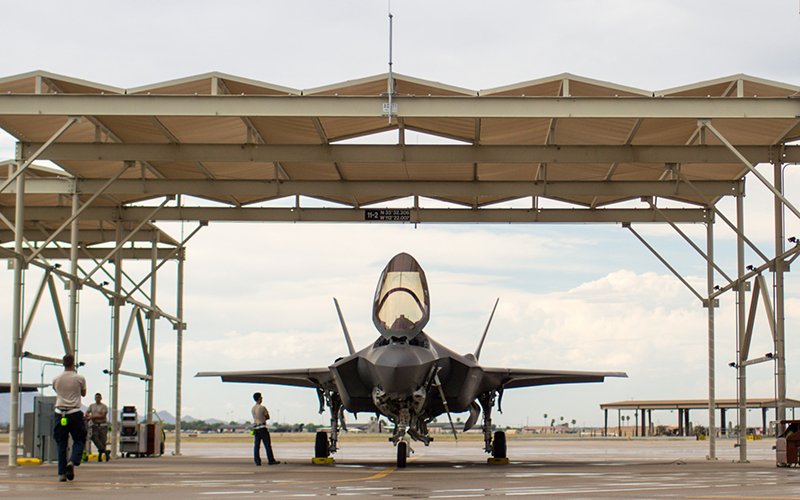 Ground crews check an F-35 at Luke Air Force Base in this December 2018 photo. A Pentagon plan to redirect $3.8 billion in fiscal 2020 funds to border wall construction would include funds allocated for two F-35s, two cargo jets, two V-22 Ospreys, money for the National Guard and more. (Photo by Nicole Neri/Cronkite News)

WASHINGTON – The Trump administration plans to tap the Pentagon for another $3.8 billion in military funds to pay for border wall construction this year, a move critics blasted as “theft,” a raid and a money grab.

The fund transfers, detailed in Defense Department budget documents uncovered Thursday, would use money that had been budgeted for two F-35 fighters, two C-130J cargo planes, drones and other equipment. The plan also targets $1.3 billion that was originally allocated for National Guard units from all four branches of the military.

This move comes a year after the White House diverted $3.6 billion from military construction projects to the wall that President Donald Trump famously promised during his 2016 election campaign would be paid for by Mexico.

Rep. Ann Kirkpatrick, D-Tucson, said in a statement released by her office Thursday that Trump is “now trying to steal money from our National Guard to pay for his vanity wall project.”

“It is alarming to see President Trump raid defense accounts – without any Congressional oversight or approval,” Kirkpatrick’s statement said. “Not only does this action disregard our separation of powers and constitutional system, it also compromises our national security by taking away valuable resources.”

A Pentagon spokesman said the Defense Department supports the transfer of funds that will officially be used by the Department of Homeland Security for drug interdiction efforts along the border.

“The Department of Defense is committed to supporting the Department of Homeland Security’s efforts to secure the southern border by constructing fences and roads and installing lighting to block drug smuggling corridors,” said Lt. Col. Chris Mitchell, the spokesman.

He said the request for funds came from DHS last month, “asking for assistance blocking drug-smuggling corridors on federal land along the southern border.”

In the budget document detailing the transfer, the Pentagon said DHS had listed “vehicle barriers, pedestrian fencing and new lighting as necessary tools to ‘impede and deny drug smuggling activities.'”

Blasting for border wall is typical of feds' neglect of tribes, leaders say

The Pentagon justified each of the more than one dozen appropriations slated for transfer, along with an explanation describing the targeted items as excessive, unnecessary or inconsistent with modernization goals. Most of the items were also labeled as congressional special interest items.

That drew the ire of National Guard Association of the United States, which said in a sharp letter to Defense Secretary Mark Esper and Joint Chiefs of Staff Chairman Gen. Mark Milley that the items being cut are far from “special interest” items.

“We contend that it is instead a special interest item for national security,” said the letter from NGAUS President J. Roy Robinson and board chairman Maj. Gen. Michael McGuire, who is also the adjutant general of Arizona.

“Reprogramming this congressionally directed funding would severely undermine the lethality and readiness of National Guard soldiers and airmen,” their letter said. “It would also significantly derail the timetable for safety upgrades and modernization efforts critical to National Guard weapon systems and equipment.”

Modernization and replacement projects for Humvees and National Guard equipment were among over a dozen appropriations on the chopping block.

Democrats on the House Appropriations Committee also criticized what they called administration “theft” from military accounts, and blamed Republican lawmakers for enabling the president.

“The Constitution gives Congress, not the President, the power of the purse,” said the statement from Democratic Reps. Nita Lowey of New York and Pete Visclosky of Indiana. “Congress rejected President Trump’s full request for wall funding, which is why he is now orchestrating this backdoor mechanism to prop up a political vanity project.”

It’s not the first time Congress and the White House have clashed over the funding.

When Congress in late 2018 denied Trump’s request for $5.7 billion for the wall, the ensuing budget standoff led to a 35-day government shutdown. The shutdown ended when Trump backed off, only to turn around and declare a national emergency that he said gives him the leeway to shuffle government funds and call on the Pentagon for the money.

That emergency was renewed Thursday by the White House.