Earthmoving equipment clears a path up Monument Hill in Organ Pipe Cactus National Monument, where a 30-foot-tall steel barrier is to be erected. Conservationists and Tohono O’odham Nation officials are concerned about damage to the environment, lands sacred to indigenous people and potential impact on migrating animals. (Photo by Annabella Piunti/Cronkite News)

Visitors are welcomed to the 516-square-mile Organ Pipe Cactus National Monument, which is on the border with Mexico and adjacent to the Tohono O’odham Reservation and to tribal cultural sites. (Photo by Annabella Piunti/Cronkite News) 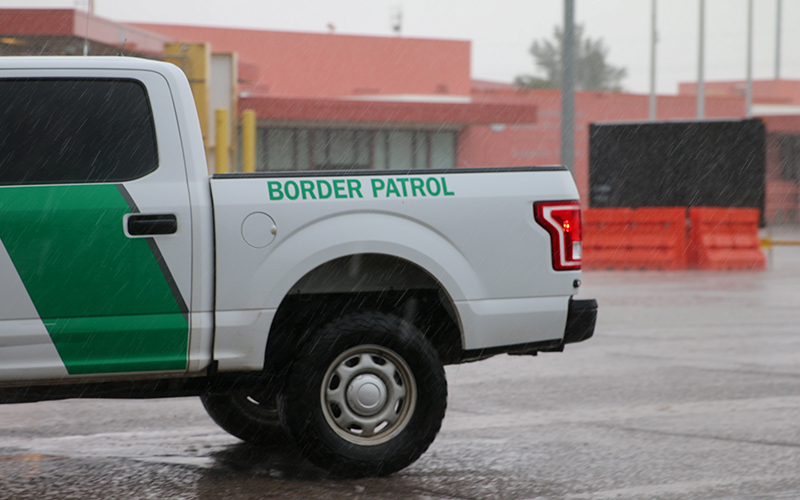 A Border Patrol truck is parked at the Lukeville port of entry, which is inside the Organ Pipe Cactus National Monument. Rain paused construction Monday on the Monument Hill site. (Photo by Annabella Piunti/Cronkite News)

Critics say the 43-mile border barrier was begun without input from the Tohono O’Odham people or conservationists. To expedite the U.S.-Mexico “wall,” the Trump administration has waived several environmental protections, including the National Environmental Policy Act and the Endangered Species Act. (Photo by Annabella Piunti/Cronkite News)

WASHINGTON – Tohono O’odham Nation Chairman Ned Norris said the “controlled blasting” for a border wall that will ultimately cut through his reservation is just the latest example of the federal government ignoring its duty to consult with tribes.

Federal agencies involved in border wall construction “are in violation of their own policies since meaningful consultations have not been held with the Tohono O’odham Nation,” Norris said in a statement Monday.

The statement was in response to reports that crews have begun blasting Monument Hill in the Organ Pipe Cactus National Monument – an area that includes a burial ground sacred to the Tohono O’odham.

Customs and Border Protection in a statement confirmed that contractors have started blasting in the area and said it “will continue to have an environmental monitor present during these activities as well as on-going clearing activities.”

That was little comfort to critics, who noted that that federal government has exercised its “Section 102” authority to waive regulations, including consultation with tribes and environmental rules, if they could get in the way of border wall construction.

Rep. Raul Grijalva, D-Tucson, said the environmental monitor “is basically collecting a check because there’s nothing he or she can do” with the environmental protections waived. He complained in a January letter to the Department of Homeland Security that the Trump administration is using that authority at “an unprecedented and irresponsible rate.”

But Rep. Paul Gosar, R-Prescott, defended the use of waivers in areas like Organ Pipe, which “current environmental laws make … much more difficult for law enforcement to patrol and secure.”

Feds waived environmental, other regs on 90 miles of state border in 2019

“I’m grateful that President Trump has decided to put American lives first and foremost, and I fully support ongoing efforts to secure our border,” Gosar said in a statement Monday.

The project in question is not on the Tohono O’odham reservation, which straddles the U.S.-Mexico border for 62 miles, but is on land in the adjacent national monument that is culturally significant to the tribe.

Grijalva visited the Organ Pipe Cactus National Monument with Norris and other tribal members on Jan. 23, accompanied by an archeologist who identified Monument Hill as a burial ground for Apache warriors and sacred to the O’odham. The sacred sites the group visited in the region also included burial grounds, villages and ceremonial grounds, dating back as long as 10,000 years, according to a spokesperson for Grijalva’s office.

Construction in the area already uncovered human remains, and since the January visit at least one area where artifacts were discovered has been bulldozed to build a road for wall construction crews. The Grijalva spokesperson called it the equivalent of digging up Arlington National Cemetery.

Norris raised many of those concerns in a Nov. 13 letter to Customs and Border Patrol seeking answers to questions that came up in an October conference call with officials from CBP, the Department of Homeland Security and the Army Corps of Engineers.

In that call, tribal officials said they learned, among other things, that construction crews were using up to 84,000 gallons on groundwater a day on wall construction and that government officials could not provide a map or schedule for the project. Norris also requested formal consultation with the tribe.

“While CBP has solicited input from the general public on the Arizona border infrastructure project, and has engaged in limited email and telephonic discussions with the Nation (primarily with staff), these actions do not constitute government-to-government consultation with the Nation’s leadership,” Norris wrote in November.

Consultation after border wall decisions are made does not satisfy the requirement, he wrote.

When there was no response to that letter, Grijalva on Jan. 7 repeated the requests for consultation in a letter to the acting secretary of Homeland Security.

As of Monday, neither Norris nor Grijalva had received responses to their letters.

While CBP responded to questions about the project Monday with only a short statement, an official responding to questions about the Section 102 waivers in December said the agency is careful to protect sites, even where it has a waiver. The official also noted that there are currently no plans for construction on the Tohono O’odham Nation – even though Section 102 waivers are in place there.

The official said in December that CBP identifies “best construction management practices to minimize impacts on the environment to the greatest extent possible.”

But National Congress of American Indians President Fawn Sharp said Monday that consultation before action is vital to Native communities.

“While we may have relinquished vast millions of acres of land across this country in exchange for treaty promises, we never relinquished our spiritual connections to the lands that we occupy,” Sharp said.

Grijalva said he hopes Homeland Security can “let go of their arrogance for just a minute and realize the consequences.”

“You’re effectively destroying a tribe’s identity,” Grijalva said. “As hard as they have fought to retain their identity, in one final blow, it’s gone.”