By McKenzie Sadeghi/Cronkite News and /

Rep. Marcia Fudge, D-Ohio, led the hearing where advocates and experts talked about the challenges Native Americans can encounter when trying to vote, including language barriers and remote locations that make access to polling places difficult. (Photo by McKenzie Sadeghi/Cronkite News)

“What was old is new again,” said Rep. Marcia L. Fudge, D-Ohio, who chaired the hearing. “It is not only appropriate, but necessary, to hold a few hearings and make up for lost time.”

The hearing came the same day a federal appeals court agreed to temporarily let Arizona restore its ban on “ballot-harvesting” – when one person collects another’s ballot – a tool that advocates said can increase voter turnout among groups like Native Americans.

The 9th U.S. Circuit Court of Appeals on Jan. 27 had overturned Arizona’s ban on ballot harvesting, one of two laws that it said reflected the state’s “long and unhappy history of official discrimination” in elections.

But the appeals court Tuesday agreed to stay its ruling while Arizona Attorney General Mark Brnovich files an appeal with the Supreme Court.

“Our job is to defend the law and we’re not going to let out-of-state special interests systematically dismantle our election integrity safeguards,” Brnovich said in a statement.

The stay came down after the hearing by the House Administration Committee’s Subcommittee on Elections – but the topic of ballot harvesting was still a hot topic for witnesses.

“We were encouraged by the 9th Circuit decision finding that the ballot harvesting ban was intentionally discriminatory,” said Jacqueline De León, a member of the Isleta Pueblo and a staff attorney with the Native American Rights Fund. 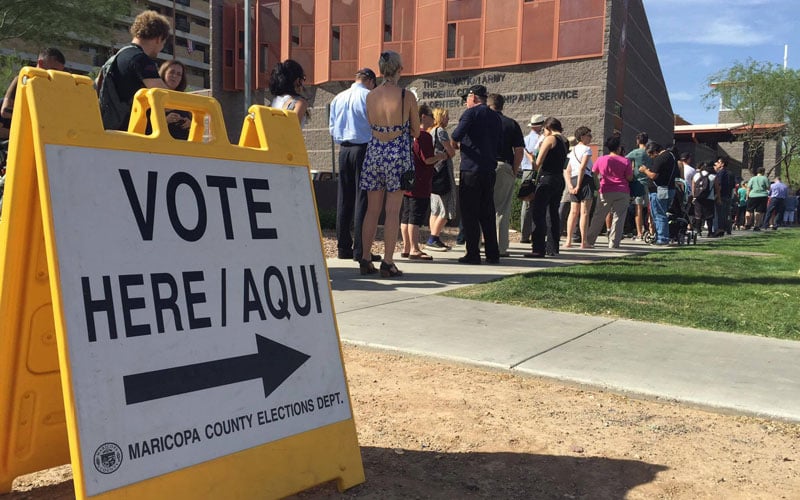 “There is a lot of work still to be done in Arizona,” she said.

Arizona is not alone. Indian Country voters face challenges to voting that include a lack of language assistance for Native speakers and difficulty complying with voter registration laws in areas where there may not be street addresses.

“A majority of Navajo citizens residing on the reservation do not have traditional street addresses,” Navajo Nation Attorney General Doreen McPaul said in her testimony.

She said that 70 of 110 Navajo Nation chapters do not have street names or numbered addresses, which accounts for at least 50,000 unmarked properties.

She was challenged by Rep. Rodney Davis, R-Ill., who said ballot harvesting is “ripe for fraud.” But McPaul said it’s not uncommon on the reservation for people to have keys to other’s post office boxes and collect their mail.

De León testified to other barriers to Native American voting that she and others identified through hearings in North Dakota, Oregon, California and Arizona. Those included geographical isolation, limited hours of government offices, technological barriers and homelessness.

Tohono O’odham Chairman Ned Norris, on Capitol Hill for another hearing Tuesday, said people do not understand the sheer isolation of some tribal villages.

“We think that if there was some level of understanding and an awareness, that we might be able to provide those polling places a little more accessible to the (Tohono O’odham) nation’s members, that could help address this issue,” Norris said. 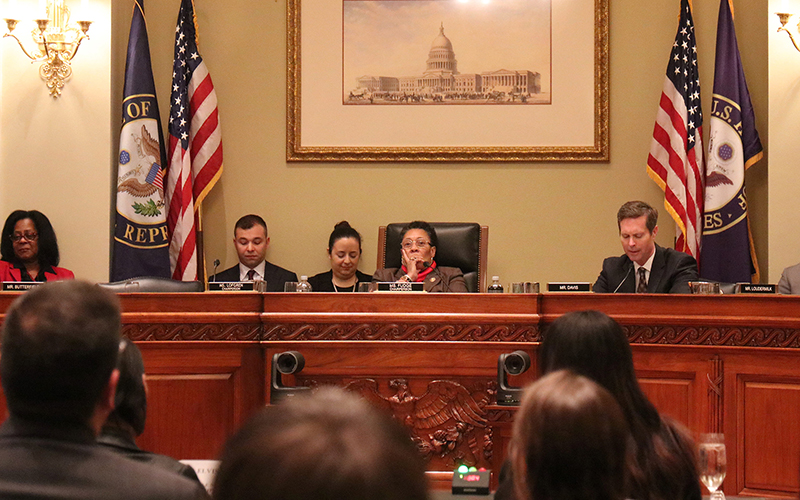 The hearing on challenges for Native American voters came the same day that a federal appeals court said it would reinstate Arizona’s ban on “ballot harvesting” for now. (Photo by McKenzie Sadeghi/Cronkite News)

Problems are not limited to the reservation. Elvis A. Norquay, a member of the Turtle Mountain Band of Chippewa Indians, testified about being turned away from a North Carolina polling place in 2014 for not having an ID with an address. Norquay, a Marine Corps veteran who has been homeless, did not always have an address or the means to buy a new ID.

“I was always happy to go vote,” he said, but “being turned away brought me down.”

Fudge called Norquay’s story “striking,” and thanked the witnesses who showed up and “made clear the obstacles they face.” She said after the hearing that Congress needs to pass the Native American Voting Rights bill passed, which would “at least make a huge step toward making sure their right to vote is protected.”

That bill aims to remove voting barriers for Native Americans by increasing voter registration sites, authorizing tribal ID cards for voting and providing resources. It has 94 co-sponsors, including all five Democrats from Arizona.

“In an era of increasing voter suppression across this country, it’s more important than ever that we safeguard access to the ballot box,” said a statement from Rep. Ann Kirkpatrick, D-Tucson.

“You also have issues with people feeling like they’re not part of the Democratic process, so when you add barriers, it impacts their desire to vote and participate,” said Ferguson-Bohnee, director of the Indian Legal Clinic at the Sandra Day O’Connor College of Law. “When you get disenfranchised and turned away, then you may not show up.”