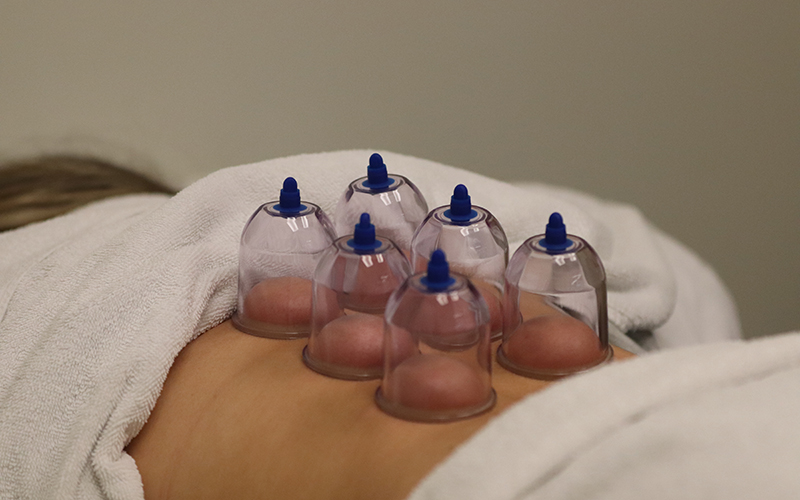 “If (a muscle group) is kind of stagnant and stuck, we create a little localized inflammatory response to jumpstart that healing process,” says Mark Jagodzinski, who has been a physical therapist for 20 years. (Photo by Griffin Fabits/Cronkite News)

PHOENIX – The science and research to back cupping therapy, the popular recovery method, is still fuzzy, but it remains widely used. Those in the sports therapy industry are lauding its simplicity, which has allowed the method to spill into the high school scene.

Cupping, sometimes referred to as vacuum therapy, suctions the skin using a glass or plastic cup. It loosens the soft tissue and relieves soreness or tenderness from the muscle. It was an ancient technique brought to national attention by swimmer Michael Phelps at the 2016 Rio Olympics.

Mark Jagodzinski, the owner of Rise Orthopedic and Sports Physical Therapy in Surprise, is one of many physical therapists who offers cupping therapy.

“I use it with great effectiveness,” Jagodzinski said, “but also with great care in the sense that I’m very selective in who I use it on. It’s definitely a case-by-case, and visit-by-visit basis.”

The premise is simple.

“If (a muscle group) is kind of stagnant and stuck, we create a little localized inflammatory response to jumpstart that healing process,” he said.

The cups are placed wherever a muscle group is sore, or tight, and sucks up the skin and draws “as much blood and toxins to the surface of the skin to create that flow in and out, so you can jumpstart that healing process,” said Jagodzinski, a 20-year veteran in the therapy profession.

The cups leave a bruise on the skin, which can last for up to a week, Jagodzsinski said.

“When you get stuck in that inflammatory phase, the tissues, everything that facilitates with blood flow in and out of that area, everything gets stuck and static,” he said. “(Cupping) is a nice way to create a very safe and stable, clean way to introduce localized inflammation. Aggravate the tissue and get it to jumpstart itself into remodeling and regeneration.”

Jagodzinski later performed cupping therapy on a college soccer player, who was experiencing tightness in the middle of her back.

“Cupping is a nice tool to have in your bag of tricks,” he said.

Although Jagodzinski doesn’t advise relying on it as a primary recovery method, it’s effective to use as a “change-up, or a way to break through some static progressions. It’s a great way to do that.”

The method itself is thousands of years old, first being traced back to Chinese and Egyptian medical practices, according to the National Center for Biotechnology Information.

It was thrust into the national spotlight during the Rio games, when all eyes were on Phelps. Keenan Robinson, then Phelps’ personal trainer and now the Sports Medicine and Science Director for USA Swimming, said it’s “akin to foam-rolling and using ice packs,” because of its simplicity.

Athletes have roared about the benefits, and Robinson has found no downsides to it.

“I’m quite confident chimpanzees in the zoo could apply it themselves,” he quipped. “You just put the suctions on, pump the gun and they’re on.”

But, nearly six years after sharing the stage with Phelps in Rio, there is still not much research to back cupping.

In a 2016 report, the American Physical Therapy Association said, “Despite the long history of cupping therapy, there is a noted lack of published evidence supporting it as a treatment for musculoskeletal conditions or defining the mechanisms by which it may have therapeutic value.”

The APTA did acknowledge that cupping “may reduce discomfort in the target tissues” and that it could “create a counter-irritation effect that temporarily increases pressure pain thresholds.” But, the report concludes, it is still relatively speculative and has “not been thoroughly investigated.”

Wyatt Bell is one young athlete who has become captivated by cupping. Bell, a junior basketball player at Surprise’s Paradise Honors High School, first began it as a freshman, when he was routinely sore and banged up with various injuries. 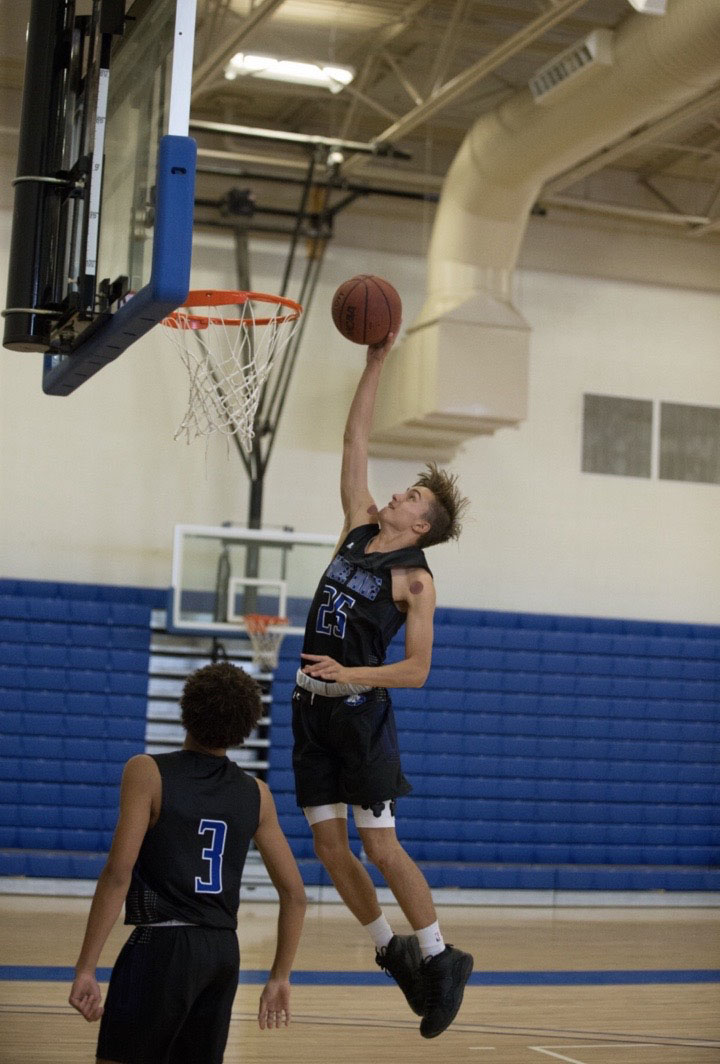 Wyatt Bell, a junior at Paradise Honors High School, avidly uses cupping therapy for his shoulders. The bruises he has from it often are visible when he suits up. (Photo courtesy Wyatt Bell)

“My shooting shoulder and my IT bands were super tight,” Bell said of the iliotibial band of tissue the runs along the thigh. “My trainer at the time, he introduced it to me. He called my mom and said, ‘Hey, I want to try this with Wyatt. I think it’d be super beneficial.’ My IT bands and my shoulder get super tight right after a game.

“We just tried it and after that, I’ve been finding big improvements.”

Bell, who has his own cupping machine at home, has avidly used it since. It’s offered inside the training room at his high school, where he’s implemented it into his pre-game preparation.

“Whenever I get a soreness in a certain muscle group, instead of rolling out what some people call ‘knots,’ or something like that, it basically releases all the pressure in that area. It automatically releases the soreness. (I do it) between games or right before. It’s super convenient.”

Bell said he frequently plays with and against players sporting the same dark, spherical bruises. “More than half” of the players on his school and club teams use cupping therapy, he said.

“They like to get a lift in, but they don’t want to be sore before the game, so they do it to get the soreness out of their chest. I know about half of my team, on my club and AAU team, do it. Now, you see it on the pros and it’s just getting bigger.”

Like Bell’s shooting shoulder, Jagodzinski will use cupping on an “overhead athlete” such as a volleyball or baseball player.

“We can put cups on their shoulder and take them through dynamic stabilization and strengthening activities. Those cups are basically stuck on there the whole time, just drawing as much blood and toxins to the surface of the skin to create that flow in and out, so you can jumpstart that healing process.”

Jagodzinski has first-hand experience with the benefits of cupping. Six years removed from extensive back surgery, he’ll routinely throw on a few cups, and instantly feel his back loosen.

Although, he has adopted a cautious approach before performing it on any patient that strolls into Rise.

“Is it a one-size fits all, where everybody is appropriate for it? No. Everybody who comes through the door isn’t going to fit these boxes that the science and the research tells us they need to be.”

But, when Michael Phelps, who Robinson calls “the greatest athlete” uses it on his sport’s biggest stage, it’s only natural for a cupping-craze to ensue.

“It’s easy,” he said. “You get to lay there and have some soft tissue work applied to you. It doesn’t surprise me (how well it’s been received.)”