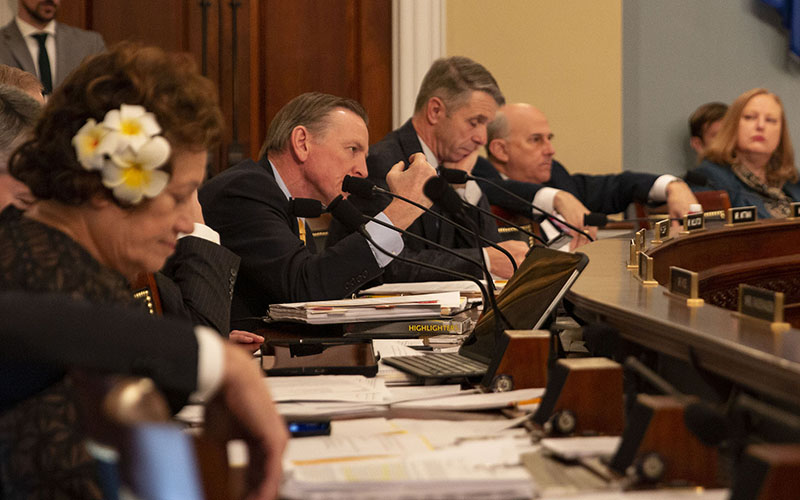 Rep. Paul Gosar, R-Prescott, gestures during a meeting of the House Natural Resources Committee where Republicans and Democrats sparred over who had the best plan for improving the Endangered Species Act. (Photo by Christopher Scragg/Cronkite News)

WASHINGTON – A House committee gave preliminary approval Wednesday to a bill that would reverse Trump administration changes to the Endangered Species Act, after a heated debate between members over which side had the best interest of the act at heart.

Rep. Raul Grijalva, D-Tucson, sponsored the bill that he said is needed to overturn rules by the departments of the Interior and Commerce that undermine the protections of the act.

But defenders like Rep. Paul Gosar, R-Prescott, say the Endangered Species Act is in desperate need of reform and that the administration’s efforts to modernize it “will help move America forward and make America great again.”

The bill passed the House Natural Resources Committee on a party-line vote after close to an hour of debate.

Grijalva, who chairs the committee, said one of the rules his bill targets is the administration’s decision to exclude climate change when officials are considering how a species might fare in the future and whether it should be listed as endangered or threatened.

“They undermine the protection for critical habitats, they dramatically limit the scope of what can be considered future threats,” Grijalva said. “Climate change under the administration’s new definition of foreseeable future can’t be considered and to some extent does not exist.”

But Gosar said Trump’s rules help make a flawed Endangered Species Act “more transparent (and) efficient,” noting that it has failed to improve the status of the vast majority of species it aims to protect.

“Since the passing of the Endangered Species Act, only 3% of species that had been listed under the act have been delisted,” Gosar said. “If only 3% of patients admitted to a hospital walked out healthy, that hospital would be shut down immediately.”

Other committee members challenged that figure, saying it does not take into consideration how other species have improved. Rep. Ed Case, D-Hawaii, said 99% of the listed species are recovering because of the Endangered Species Act.

“Yes, it does cause people to have to go through some hoops,” Case said of the law. “That’s as it should be if the end goal is to preserve our endangered and threatened species.”

The debate was testy throughout, with committee Democrats questioning Republicans’ motives.

“The problem is, many of my colleagues across the aisle have spent years fighting against the funding of our federal resource agencies,” said Rep. Jared Huffman, D-Calif. “It’s a little bit like the arsonist lamenting fire damage.”

Gosar snapped back at Democrats on the panel, saying “you better know a lot about my background before you start implying what I stand for.”

“I’m very passionate about species,” Gosar said. “In fact, in my front yard I have a pond that we’re trying to build in regards to threatened frogs.”

Gosar tried to amend Grijalva’s bill to cement the administration’s changes to Endangered Species Act in place, but it failed on a 15-22 vote.

“We should be working together to improve the Endangered Species Act and supporting changes that bring it into the 21st century on a bipartisan basis,” Gosar said before that vote.

The bill still has to pass the full House and it faces an uphill fight in the GOP-controlled Senate. But environmental policy advocates applauded the committee’s approval.

“The world loses more unique animals and plants to the extinction crisis every day we don’t take action,” said a statement from Stephanie Kurose, an endangered species policy specialist at the Center for Biological Diversity. She said there is an ongoing species die-off around the world.

“We’re grateful lawmakers have taken this important step to reverse the Trump administration’s cruel attack on the Endangered Species Act,” her statement said.