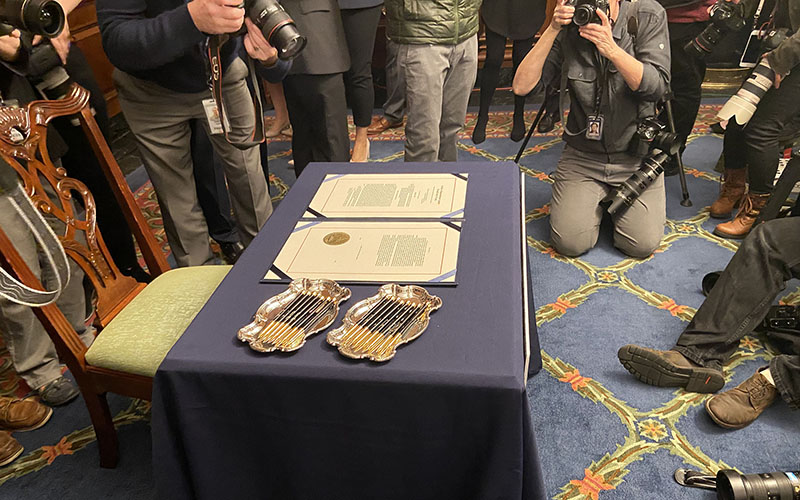 The articles of impeachment against President Donald Trump before being signed Wednesday by House Speaker Nancy Pelosi for delivery to the Senate. (Photo by McKenzie Sadeghi/Cronkite News)

WASHINGTON – Arizona lawmakers voted on a straight party line Wednesday to forward two articles of impeachment against President Donald Trump to the Senate for trial, a 228-193 vote as predictable as the arguments for and against it.

Rep. Andy Biggs, R-Gilbert, repeated his earlier accusations that the Democratic majority is engaged in “radical, vindictive efforts to punish, harass, and remove their political opponent” with impeachment.

But Rep. Raul Grijalva, D-Tucson, called on senators to demand that the administration provide documents and witnesses for the trial, saying senators need to “decide whether they are defenders of the Constitution or willing participants in Trump’s corrupt cover-up.”

Only one Democrat, Rep. Collin Peterson of Minnesota, joined the 192 Republicans who voted against the resolution to forward two articles of impeachment to the Senate. Independent Rep. Justin Amash of Michigan joined 227 Democrats who supported the measure.

Nine House members did not vote, including two from Arizona. Democratic Rep. Ann Kirkpatrick of Tucson and Republican Rep. Debbie Lesko of Peoria were both absent, with their offices citing illness.

The vote was part of a day of action by the House, which just less than a month ago voted to impeach Trump, making him only the third president to be impeached.

In weeks of hearings, the House said that Trump withheld military aid to Ukraine in an effort to pressure the president there into interfering with the 2020 U.S. presidential election, by announcing an investigation of former Vice President Joe Biden’s son. Biden is a front-running Democratic challenger to Trump this fall.

The House on Dec. 18 approved two articles of impeachment, accusing Trump of abuse of power and obstruction of justice, for refusing to turn over documents or allow White House aides to testify to congressional committees. Those articles form the basis for a trial in the Senate, which could begin Tuesday and would be presided over by Chief Justice John Roberts.

House Speaker Nancy Pelosi began Wednesday by announcing the seven Democratic House members who will manage the case against Trump in the Senate. She said repeatedly over the course of the day that it was an historic, but necessary, action.

“The president violated his oath of office, undermined our national security, jeopardized the integrity of our elections,” Pelosi said.

But in a conference call with reporters Wednesday afternoon, senior White House officials said they anticipate a fast trial.

“Facts show that he did nothing wrong,” one of the officials said of the president. “There are no grounds for impeachment.”

The officials said there will be no need for witnesses, pointing to the impeachment trial of former President Bill Clinton where senators heard evidence first and then called witnesses as needed. They noted that it took Democrats almost a month to deliver the articles of impeachment after they were approved by the House.

“It was an urgent matter and rushed through, they had overwhelming evidence, then changed their mind and decided it wasn’t that urgent,” the officials said of what they called “the weakest articles of impeachment that have ever been passed.”

The articles were hand-carried to the Senate by the House managers early Wednesday evening after a signing ceremony during which Pelosi repeatedly invoked history and the Constitution.

“So sad, so tragic, for our country, that the actions taken by the president undermined our national security,” she said. “Today we will make history … delivering articles of impeachment against the president of the United States.”

Managers are expected to read the articles and resolution on the Senate floor as early as Thursday. With the Martin Luther King Jr. holiday on Monday, the Senate trial is not expected to begin until Tuesday.

Biggs said he expects the Senate will vote to exonerate Trump, and will do so quickly.

But Pelosi said Wednesday morning that, in the end, Congress has a “strong case for impeachment of the president and removal for the president.”

Kirkpatrick, who voted for impeachment last month, announced that she missed Wednesday’s vote because she had enrolled in a facility to treat her alcohol dependence. That came a week after she was injured in a fall that has kept her out of office – and for which she said alcohol was an underlying factor. She did not say how long she expects to be away.

Lesko, a staunch defender of Trump’s, was out sick, her office said. But in a tweet that cited a line from Pelosi’s speech Wednesday morning, Lesko said impeachment “has been the Democrats’ mission since the day President @realDonaldTrump was elected.”