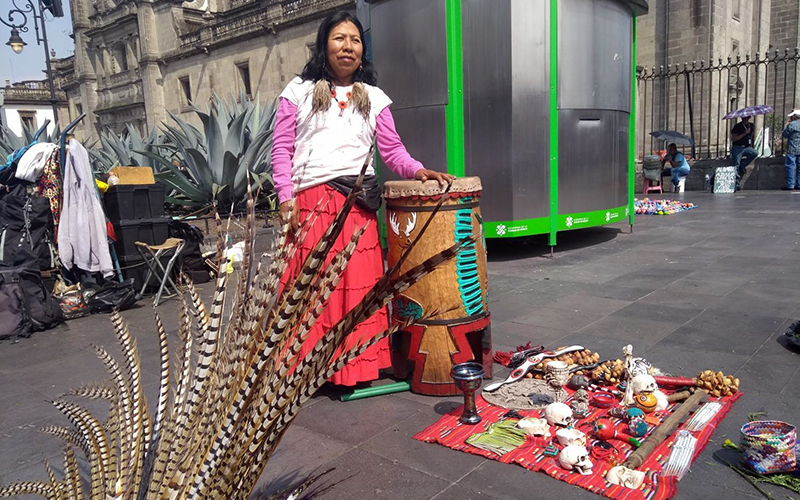 Domitila Temictli and her family perform spiritual cleansings and ritual dances in downtown Mexico City, steps away from the Templo Mayor of the vanquished Aztec empire. (Photo by Rodrigo Cervantes/KJZZ) 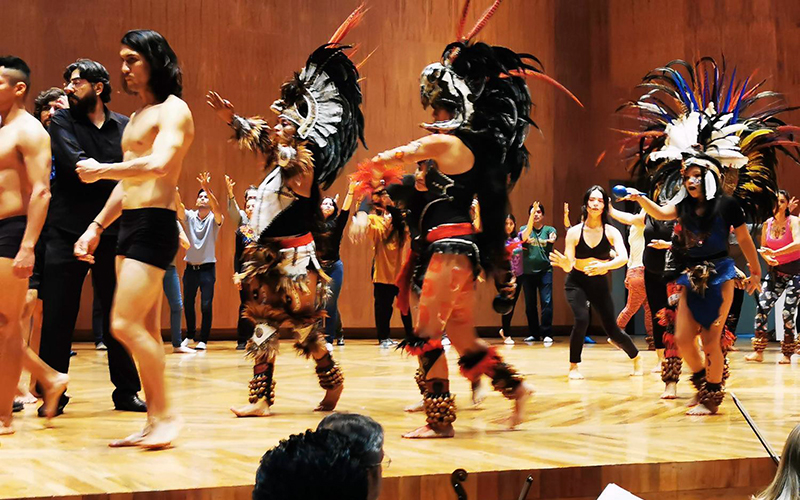 Dancers in partial dress rehearse “Motecuhzoma II,” composed by Samuel Máynez based on a Vivaldi opera from the 1730s. (Photo by Rodrigo Cervantes/KJZZ)

MEXICO CITY – The Spanish Conquistadors arrived at the capital of the Aztec empire five centuries ago, igniting the brutal, relentless European colonization of the Americas. And for many Mexicans, the encounter between the two worlds is a prevailing, painful clash.

The amiable meeting resulted not only in the eventual European colonization of South America, Central America and parts of North America, but also in a longstanding debate over the wounds left by the encounter, which was quickly followed by the Spanish annihilation of the Aztec empire.

A small mural depicting the arrival of Cortés in Tenochtitlán is at the exact place where it happened, now hemmed in by Mexico City’s heavy downtown traffic. On the anniversary, two descendants of Moctezuma II and Cortés met at the spot as part of a documentary about their forebears, imitating a hug to that would alter the fate of many nations.

And a few blocks from the mural, Domitila Temictli conducts spiritual cleansings and performs ritual dances based on pre-Columbian traditions. Cleansings are normal and seen as medicine in her culture, she said, particularly in small towns like the one in Guerrero where she was born, where no hospitals exist.

For her, the conquistadors left behind “a humiliating massacre.”

“They chopped off our trunk and branches, but they couldn’t destroy our roots,” she said.

Temictli said the Spaniards claim they discovered a land that already belonged to her ancestors, adding, “History has been told by the winners, but our culture is reemerging.”

Many Mexicans consider themselves mestizos, a blend of indigenous and European cultures, but others share Temicli’s resentment toward the conquistadors. The Christopher Columbus statue in Mexico City is vandalized every Oct. 12, the date in 1492 when the explorer first sighted land in the New World.

Mexico’s President Andrés Manuel López Obrador has asked Spain and the Vatican to apologize for the atrocities committed during La Conquista. He also accused Cortés of being the author of Mexico’s first fraud.

“We can’t modify the past, but we can influence the future, looking for lessons rather than culprits,” said Miguel Utray, cultural counselor of the Spanish Embassy in Mexico and director of the Cultural Center of Spain in Mexico.

The diplomat said the European expeditions 500 years ago represented the first globalization, bringing progress and an exchange of products and knowledge.

“There are currently more than 6,000 Spanish companies in Mexico, and there is a lot of Mexican investment in Spain, so I guess we could say we have closer relations with Mexico than we have with any country,” Utray said.

The Spanish language became universal, he said, thanks to the explorations of his countrymen.

“There are 500 million Spanish native speakers currently, and the two countries with the most Spanish speakers are here: Mexico and the United States,” Utray said. 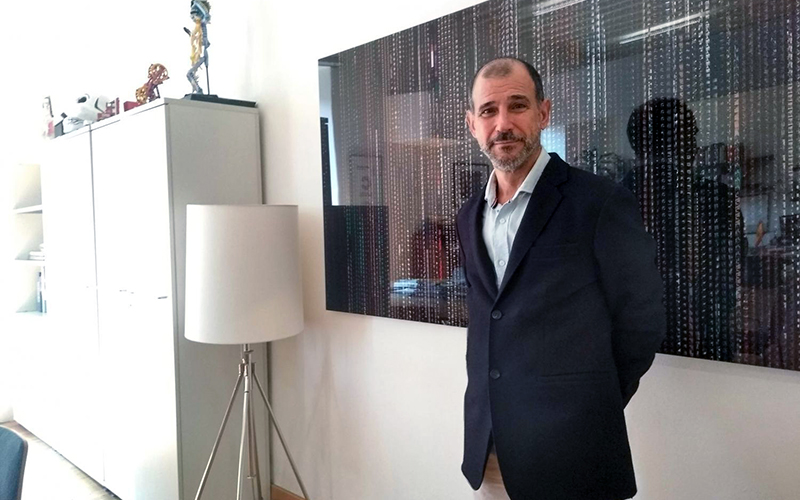 Miguel Utray is cultural counselor of the Spanish Embassy in Mexico and director of the Spain’s Cultural Center in Mexico City. (Photo by Rodrigo Cervantes/KJZZ)

In Mexico City’s main square, El Zócalo, an opera commemorated the encounter between the Aztec king and the Spanish adventurer 500 years after it happened.

“Motecuhzoma II” is based on Antonio Vivaldi’s opera “Motezuma,” which debuted in 1733. Samuel Máynez, a researcher and composer, is the author of the contemporary version.

Máynez said he had to turn Vivaldi’s tragicomedy with a happy ending into what it really was: a tragedy. He gave a voice to the subjugated indigenous people by integrating Mayan, Náhuatl and Castilian languages into the work.

“Mexico hasn’t fully come to terms with its complex past, and we still hold some grudge against Cortés and Moctezuma,” Máynez said.

The researcher cautioned against the tendency to simplify Cortés as an evil conqueror and Moctezuma as a treasonous leader. That ignores the complexity of those times and how the disparate cultures colored the ways Spanish and Aztecs saw their worlds – and even such facts as how indigenous people who had been oppressed by the Aztecs joined forces with the Spaniards, who later subjugated them, too.

Máynez said that in his opera, as in history, there are no real villains or heroes, but characters who deserve a better understanding. He incorporated baroque and indigenous instruments to reflect the resulting diversity.

“Some are still asking for apologies, licking old wounds, and we are still holding a grudge instead of healing ourselves or embracing the legacy left from both worlds,” Máynez said.

For him, “Motecuhzoma II” is a way to reflect on what he says Mexico and other former colonized nations should do: reconcile with their past and embrace their multiethnic and multilinguistic present.